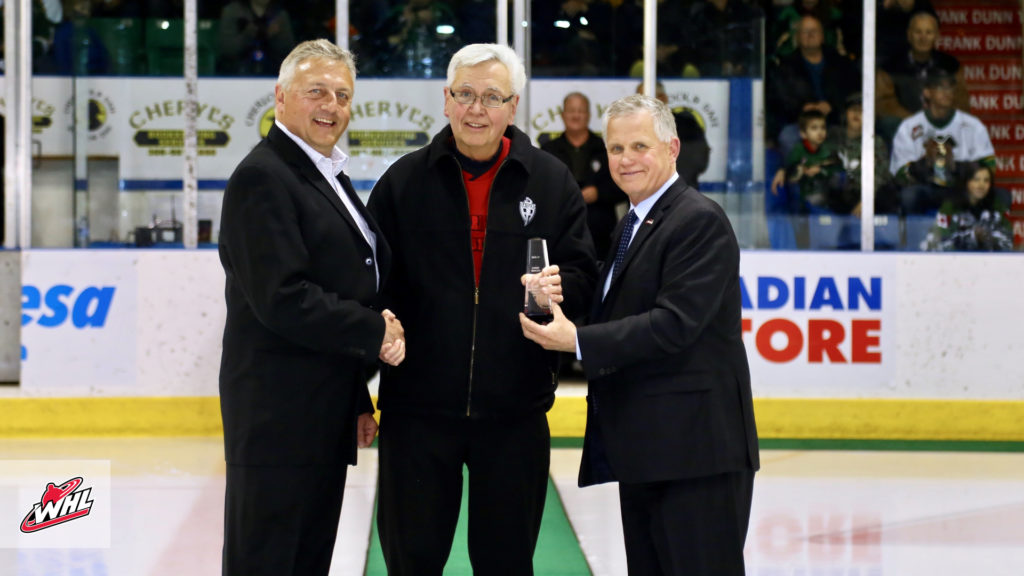 Prince Albert, Sask. – Western Hockey League Commissioner Ron Robison announced today, on behalf of the WHL Board of Governors, that Gerry Bergen, the head of off-ice officials for the Prince Albert Raiders, has been named a recipient of the WHL Distinguished Service Award for the 2018-19 WHL season.

Bergen was honoured by WHL Commissioner Ron Robison in Prince Albert during a special ceremony prior to Saturday’s game between the Prince Albert Raiders and Saskatoon Blades.

“Without the volunteer leadership from individuals such as Gerry, the Raiders and minor hockey would not be in a position to continue operating at the level they do today,” commented WHL Commissioner Ron Robison. “All of us at the WHL would like to thank Gerry for the extraordinary contributions he has made to the Raiders organization in his role as an off-ice official for close to 50 years.”

Bergen’s involvement with the Raiders dates back to the establishment of the Club in 1971, when it first began play in the Saskatchewan Junior Hockey League. He has served as a volunteer off-ice official for the entire 48 years of the Raiders, remaining with the Club when it moved to the WHL in 1982.

Over the span of Bergen’s involvement with the Club, he has fulfilled a variety of different roles in the community, including serving as a fundraising canvasser for the Prince Albert Communiplex – now known as the Art Hauser Centre, home of the Raiders. In 2001, Bergen took over the role as Head of Off-Ice Officials, managing upwards of 20 volunteers, scheduling, instruction and correspondence with Kevin Muench, WHL Senior Director, Officiating. Bergen remains in the role of Off-Ice Officials Coordinator today.

“I’ve known Gerry since I was 17 years old,” said Curtis Hunt, General Manager of the Prince Albert Raiders. “His commitment to not just the Raiders, but to all hockey in Prince Albert, is second to none. It’s people like Gerry who are the lifeblood of smaller organizations. We are very appreciative of the work Gerry has done for us over the past 48 seasons.”