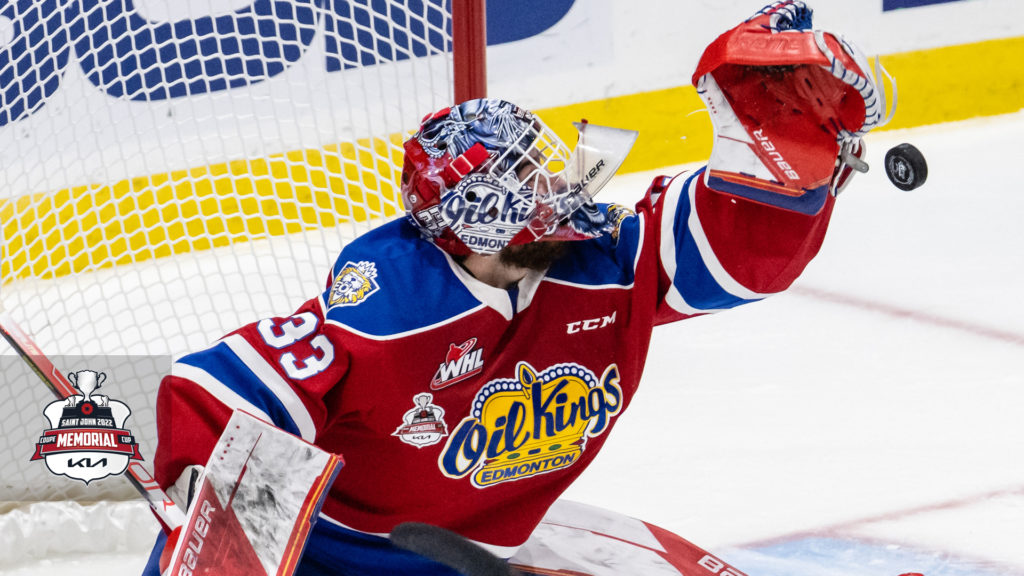 Sebastian Cossa knows a thing or two about being the centre of attention.

The Edmonton Oil Kings netminder was the first goaltender chosen in the 2021 NHL Draft, going 15th-overall to the Detroit Red Wings and in three WHL seasons, he’s built a reputation at being both unflappable and unbeatable.

“It was a tough first period by our whole group, but ‘Coss came back in and said ‘that’s all they’re getting on me,'” Oil Kings forward Carter Souch said after Wednesday’s win.

“He kind of had that attitude that they weren’t going to put another one past him. He’s a great goalie, and he was great tonight,” Souch added.

He’s got 19 career WHL shutouts, five of which came during the Oil Kings’ run to the WHL Championship this spring.

Two of those five occurred in a six-game Championship Series including a deciding Game 6 against the Seattle Thunderbirds.

He’s had the benefit of playing on strong teams; in each of Cossa’s three WHL campaigns, his Club has won at least a division crown.

“It’s pretty obvious, our top-four (defence corps) is probably one of the best in the League, we have some great forwards with great defensive minds,” Cossa noted last week, “it makes my job a lot easier.”

“This group has been able to (win) the past three, four years. To finally get this chance to go (to the Memorial Cup) and write our story, it’s a great way to finish for sure,” Cossa added.

But his 87 career WHL wins (in 117 career WHL games) are no accident, his near-immediate penning of an NHL entry-level contract with Detroit last summer is proof positive of both his potential, and his future in the game.

In hockey, as in life, sometimes things really do come full circle, too. While Cossa was raised in Fort McMurray, Alta., the place of birth on his passport is listed as Hamilton, Ont.

He’ll certainly be leaned upon in Edmonton’s Memorial Cup round-robin finale, which, coincidentally, will be played Friday against a team from the Steel City.

“It’s cool,” Cossa said earlier this week. “Those jerseys were one of my favourites growing up.”

“I haven’t been back (to Hamilton) in a while, it’s a small world to say the least,” he added.

Cossa exudes a quiet confidence on the ice. Nothing seems to faze him.

That confidence is bound to serve him well this week in Saint John, N.B. and this fall, when the professional game comes calling.