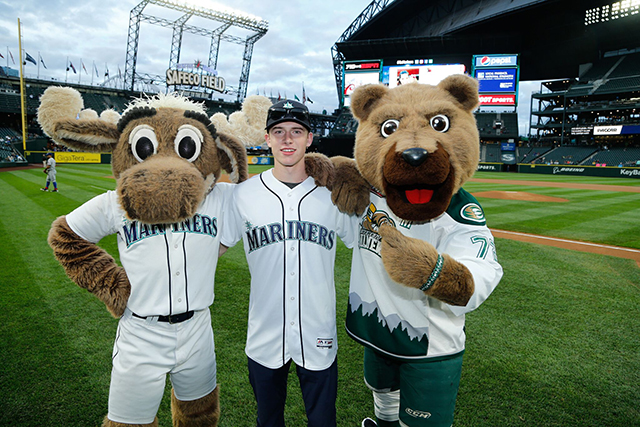 More than just the hockey world has taken note of Carter Hart’s heroics.

Hockey fans in the Pacific Northwest were privy to the dominance of the Everett Silvertips goaltender during the 2015-16 Western Hockey League season, as the native of Sherwood Park, Alta., played in 63 of his club’s 72 games, going 35-23-1-3 with a 2.14 goals-against average, .918 save percentage and six shutouts en route to being named CHL Goaltender of the Year.

Hart had the opportunity to rub shoulders with MLB All-Stars and even brought some friends and teammates along for the experience.

The 6-foot-2, 180-pound Hart became the first goaltender selected at the 2016 NHL Entry Draft, going in the second round (48th overall) to the Philadelphia Flyers.

Hart has seen action in one WHL pre-season game this fall, taking a 3-1 loss to the Seattle Thunderbirds.

Next on the calendar for Hart and the Silvertips is a date with the Spokane Chiefs on Wednesday (3pm, PDT) in Kennewick, Wash.

Check out some of social media’s best from Hart’s big night in the Emerald City:

Everett’s @c_hart70, drafted in June by the Flyers, was out tonight delivering the first pitch. https://t.co/01Xap0tT92