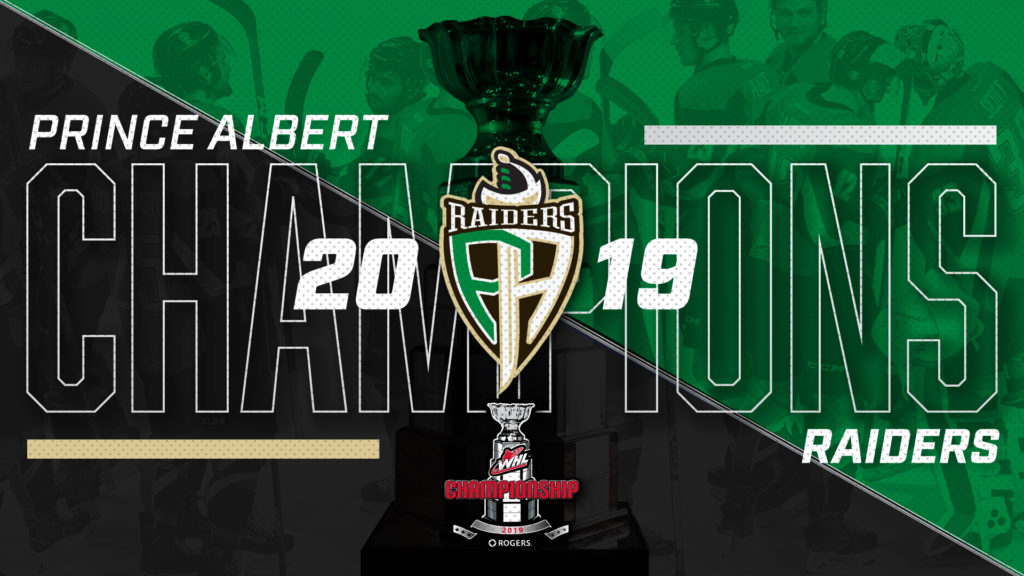 For the first time since 1985, the Prince Albert Raiders are Western Hockey League Champions.

Earning a 3-2 overtime win against the Vancouver Giants in Game 7 of the 2019 Rogers WHL Championship Series Monday, the Raiders have been crowned as the WHL’s top team for the second time since they entered the league ahead of the 1982-83 WHL Regular Season.

Rising to the top quickly and staying there, the Raiders set the tone on the opening night of the 2018-19 WHL Regular Season, beating the Regina Pats to end a 15-game losing streak to one of their provincial rivals. That began a run of 17 consecutive home victories for the Raiders that would last until December 28, 2018. Factoring in their games away from the Art Hauser Centre, the Raiders were just as strong, providing the right conditions for a 19-game winning streak from early October until the start of December.

Led by the steady hand of captain Brayden Pachal on the blue line, the Raiders lost just seven times throughout the 2019 WHL Playoffs.

Matched up against the Red Deer Rebels in the first round, the Raiders made quick work of their Central Division opponents with a sweep of the series. Taking on their geographical rivals in the Saskatoon Blades in the second round, the Raiders found themselves in a 2-2 tie, only to come through with decisive victories in Games 5 and 6. The Raiders faced a similar predicament in the Eastern Conference Championship against the Edmonton Oil Kings, only for 2019 NHL Draft prospect Aliaksei Protas to pot back-to-back hat tricks in the critical fifth and sixth contests.

Since being named General Manager ahead of the 2015-16 WHL Regular Season, Curtis Hunt has overseen the construction of the championship roster full of talent at every position.

Entering his fourth-full season with the Raiders, goaltender Ian Scott reached another level. The Calgary, Alta. product was already a prospect of the team when Hunt took over, but after three long seasons, the Toronto Maple Leafs prospect reached the top of his game in his junior career to date.

Scott posted 38 wins, a 1.83 goals-against average, .932 save percentage, and eight shutouts. Ranking second in the WHL for the first three categories, Scott led the league in shutouts as the Raiders allowed 156 goals, the second-fewest in the entire league. He’d add to his team’s goal differential by scoring the first goal of his WHL career on Friday, November 16 against the Tri-City Americans. Scott’s determination and strength of played earned him the ultimate honour of the season, being named WHL Goaltender of the Year.

Hunt, named the WHL Executive of the Year at the 2019 WHL Awards, also made several shrewd moves to bolster his team’s roster.

In July 2018, the Raiders acquired overage forward Noah Gregor from the Victoria Royals. Unsure if the Beaumont, Alta. product would make the jump to the professional hockey ranks with the San Jose Sharks organization or return to the WHL, the latter proved to be true. Gregor would go to have the best statistical season of his WHL career, posting 88 points (43G-45A) in 63 games.

Nearing the WHL Trade Deadline in January 2019, Hunt made another deal with the Royals, acquiring overage forward Dante Hannoun. From January 3, 2019 to the end of the regular season, the Delta, B.C. product would post 31 points (10G-21A) in 28 games. He’d also add 24 points (14G-10A) in 23 WHL Playoff games, leading the league in goals during the second season.

Behind the bench, WHL Coach of the Year Marc Habscheid steered the roster through the highs and lows to get to this point. The championship title is the second of Habscheid’s WHL career after winning in 2003 with the Kelowna Rockets. As part of the Raiders’ strong season, Habscheid became the eighth coach in WHL history to record 500 coaching victories, accomplishing the feat in February 2019.

Fans of the Raiders have had to wait 34 years for this feeling of championship jubilation to repeat itself. In the 1984-85 WHL Regular Season, their third in team history, the Raiders went 58-11-3 throughout the 72-game season, then going 12-1 to claim their first and only WHL Championship to date. Shortly after their victory, they’d add the perfect topping to their accomplishments by winning the Memorial Cup that year as well.

Their 119 points that season have yet to be matched by any Raiders team in WHL history. This year’s version of the Raiders achieved a record of 54-10-2-2, the most wins of any team in a 68-game regular season in WHL history, and seven points shy of the total achieved by the 1984-85 Raiders.

With another WHL Championship now in their possession, the Raiders will be in strong pursuit of another Memorial Cup. As champions of the WHL, the Raiders have earned entry into the 2019 Memorial Cup presented by Kia in Halifax, N.S, from May 17 to 26.

Prince Albert’s squad in 1985 was one to remember with captain Dan Hodgson posting 36 points (10G-26A) to lead all players in that year’s playoffs. Defenceman Manny Viveiros, a WHL Champion with the Swift Current Broncos last season, led the Raiders on the blue line. A rookie on the team, Hunt contributed to the on-ice portion of the team’s win in 1985 before being behind the composition of this year’s roster.

In addition to winning their first WHL Championship since 1985, they have ensured back-to-back league title victories by Saskatchewan-based WHL teams with Swift Current’s victory last season.