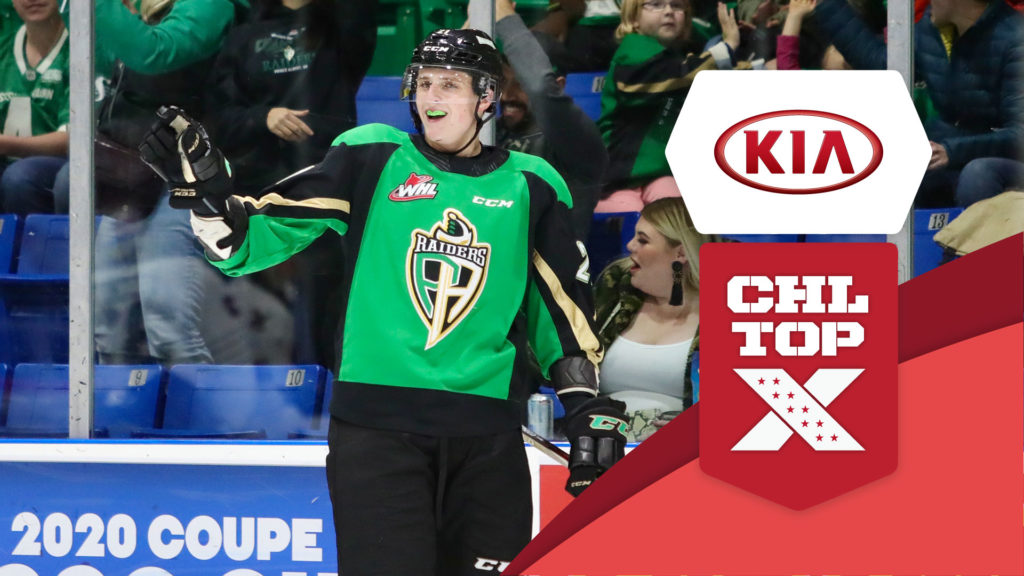 Toronto, Ont. – The Canadian Hockey League today announced the week 12 edition of the Kia CHL Top-10 Rankings for the 2019-20 season. The weekly rankings of the CHL’s Top-10 teams are selected by a panel of National Hockey League scouts.

Moving up to the fourth spot this week were the Prince Albert Raiders. Their weekend consisted of a home-and-home sweep of the Swift Current Broncos. Leading forward Aliaksei Protas (Washington Capitals) recorded five points (1G-4A) in the two games to cap off a strong November that saw him record 23 points (9G-14A) in 13 games. Protas is one of three Eastern Conference forwards currently tied for the WHL scoring lead with 42 points each. Protas will now attend Belarus’ camp in advance of the 2020 IIHF World Junior Championship Division 1A tournament. The Raiders return to action on Friday, December 6 (7:00 p.m. CT) when they host the Kelowna Rockets at the Art Hauser Centre.

Finding their way into sixth place for this week’s rankings, the Everett Silvertips earned a 4-0 shutout against the Spokane Chiefs before dropping a 2-1 decision against the Seattle Thunderbirds. For goaltender Dustin Wolf (Calgary Flames), Wednesday’s victory was the 15th shutout of his WHL career. With a 13-6-0-0 record, 1.94 goals-against average, 0.940 save percentage, and four shutouts, Wolf leads the league in SV% and shutouts, ranking second in GAA and fourth in wins. The Silvertips return to action on Wednesday, December 4 (7:00 p.m. MT) when they begin a Central Division road trip against the Lethbridge Hurricanes at the ENMAX Centre.

Moving into the ninth position this week were the Medicine Hat Tigers. The Tigers extended their winning streak to five games with a trio of victories over the past week. After a 6-0 win against the Moose Jaw Warriors and 5-3 defeat of the Saskatoon Blades, the Tigers earned an 8-3 win against the Hurricanes Tuesday. Captain James Hamblin posted 24 points (11G-13A) in 12 games throughout the month and was recognized as the WHL McSweeney’s Player of the Month for November. The Tigers will face the Hurricanes again on Friday, December 6 (7:00 p.m. MT) at the ENMAX Centre.

Earning honourable mentions this week were the Portland Winterhawks and Edmonton Oil Kings.

With a 7-1-1-1 record in their last 10 games, the Winterhawks have risen to the top spot in the U.S. Division and Western Conference. Goaltender Joel Hofer (St. Louis Blues) posted an 8-2-1-0 record, 1.75 GAA, 0.944 SV%, and one shutout during November to earn WHL Vaughn Goaltender of the Month honours. The Winterhawks complete a four-game road trip when they take on the Prince George Cougars at the CN Centre on Wednesday, December 4 (7:00 p.m. PT).