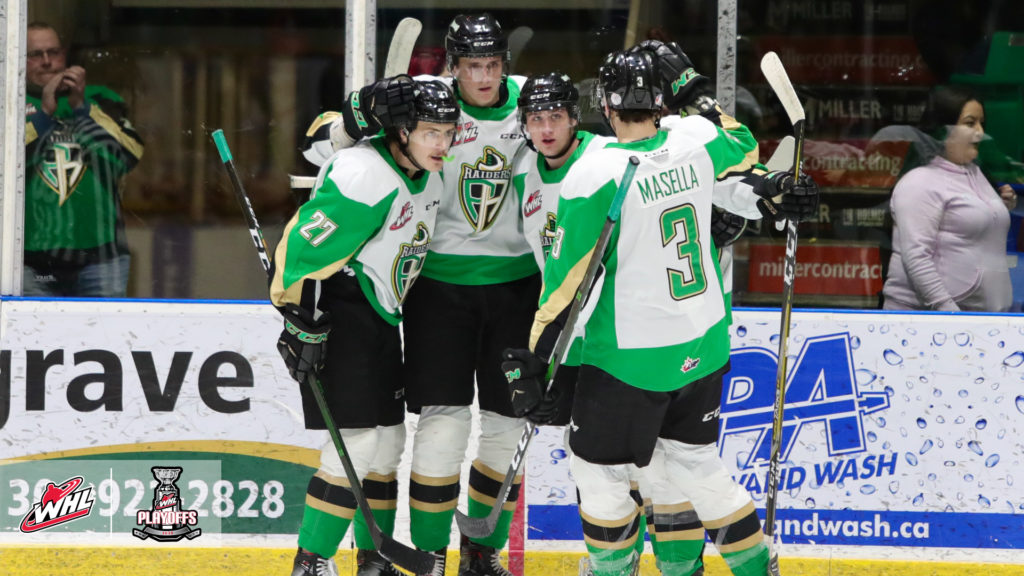 The defending Ed Chynoweth Cup Champions have clinched a spot in the 2020 Western Hockey League Playoffs!

With a 6-3 loss by the Regina Pats Friday, the Pats can only achieve a maximum of 69 points by the end of the 2019-20 WHL Regular Season. Given that the idle Raiders entered the night with 71 points, the Pats can no longer catch them. Prince Albert are the first team from the WHL’s East Division to clinch a playoff spot.

Through there have been some bumps along the way, the Raiders have retained the top spot in the East Division for a second-straight year with a strong returning core from last year’s championship-winning squad.

Washington Capitals prospect Aliaksei Protas has led the team with 70 points (28G-42A) through 50 games this season as the 19-year-old from Belarus continues to leave his mark on the WHL. 2020 NHL Draft prospect Ozzy Wiesblatt has also taken a step forward with the Raiders, posting 61 points (21G-40A) in 56 games to rank second in team scoring.

An early-season trade with the team the Raiders defeated in the 2019 Rogers WHL Championship Series, the Vancouver Giants, saw them acquire forward Brayden Watts. The overage forward from Bakersfield, Calif. has since posted career-best totals in goals, assists, and points, recording 51 points (23G-28A) through 53 games.

Long-time Raider Spencer Moe and another draft-eligible prospect in Ilya Usau have each posted 45 points this season to provide strong depth scoring on the team.

On the blue line, 2020 NHL Draft prospect Kaiden Guhle leads all Raider defencemen with 36 points (9G-27A) through 56 games. Captain Zack Hayes is another one of the championship roster holdovers that has helped provide the continuation of success, posting 22 points (6G-16A) in 52 games in a Raider uniform this season.

Acquired at the WHL’s Trade Deadline from the Regina Pats, goaltender Max Paddock has breathed new life into the Raiders’ hopes for this season. Through 13 games with Prince Albert, Paddock has posted a 9-2-0-2 record, 1.52 goals-against average, 0.941 save percentage, and two shutouts.

After WHL Championship victories in 1985 and 2019, the Raiders will have their eye on championship success in 2020. They’ll also look to become the first back-to-back WHL Champions since the Kamloops Blazers in 1994 and 1995.

The Raiders are on the road next, taking on the Brandon Wheat Kings on Saturday, February 22 (7:30 p.m. CT) at Westoba Place.