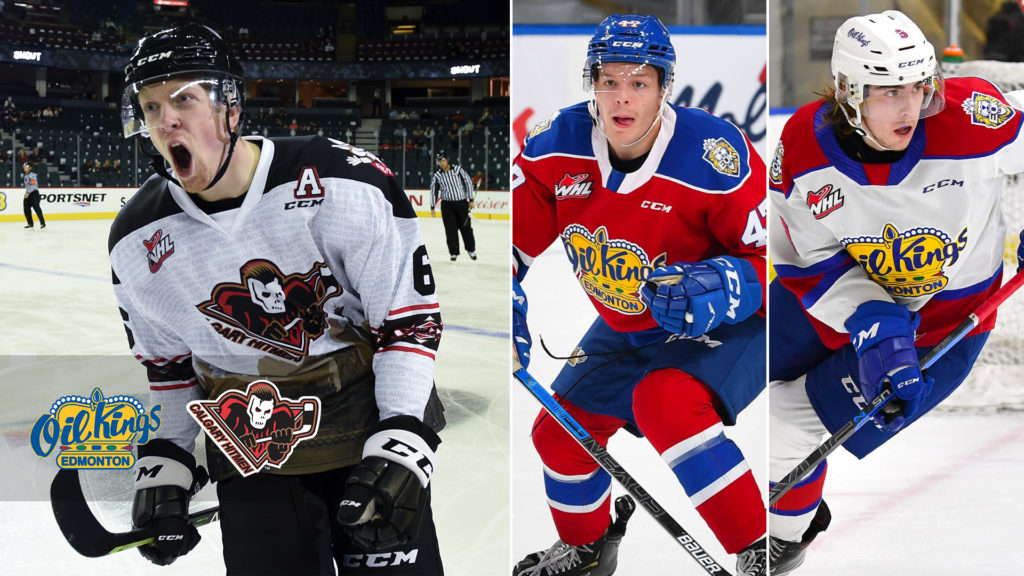 The product of Edmonton, Alta. has spent parts of five seasons with the Hitmen, and was a third-round selection by Nashville in the 2020 NHL Draft. Prokop signed a three-year, entry-level contract with the Predators in December of last year.

“The organization is really excited to welcome Luke to the Oil Kings,” said Oil Kings President of Hockey Operations and General Manager Kirt Hill. “Luke is a player we know well having played against him in our division over the past three seasons. We feel he will bring a wealth of experience to our back end and is a player who can play big minutes for our group.”

“Luke is a great skater with good puck moving abilities who will fit into our style of play and system here in Edmonton. We are looking forward to getting him into our lineup this weekend,” Hill added.

The #OilKings have acquired D Luke Prokop from the Calgary Hitmen in exchange for D Keagan Slaney, D Blake Heward, a 2022 2nd-round pick and a conditional 2024 4th-round pick.

“We are extremely proud to have had Luke as a part of the Hitmen organization and to watch him grow as a player and person” said Hitmen General Manager Jeff Chynoweth. “He has had a significant impact on our team, our city and the entire hockey community with his courage and determination. The trade provides Luke the opportunity to finish his WHL career in his hometown. We wish him the very best.”

Prokop was originally selected by the Calgary Hitmen with the seventh overall pick in the 2017 WHL Draft.

The 6-foot-5, 220-pound blueliner has amassed 43 points (8G-35A) in 153 career WHL regular season games, all with the Hitmen. He has appeared in 11 additional post-season contests, recording four assists.

The product of Airdrie, Alta. was originally drafted by the Oil Kings with the 20th overall pick in the 2018 WHL Draft.

Heward, 18, appeared in 23 career games with the Oil Kings, picking up three assists, Hailing from Regina, Sask., Heward was listed and signed by Edmonton prior to the 2020-21 season after being originally selected by the Swift Current Broncos in the seventh-round of the 2018 WHL Draft.

“Keagan and Blake are excellent additions to our group as they both have WHL experience and provide added depth,” Chynoweth added. “As we continue to develop our young group, they will be influential in our future growth and success.”

“The Edmonton Oil Kings thank Keagan Slaney and Blake Heward for their contributions on and off the ice,” added Hill. “We wish them all the best in their future endeavours in hockey and life.”

The Hitmen have acquired D Keagan Slaney and Blake Heward in exchange for D Luke Prokop. In addition the Hitmen will receive a 2022 2nd-round pick and a conditional 2024 4th-round pick.