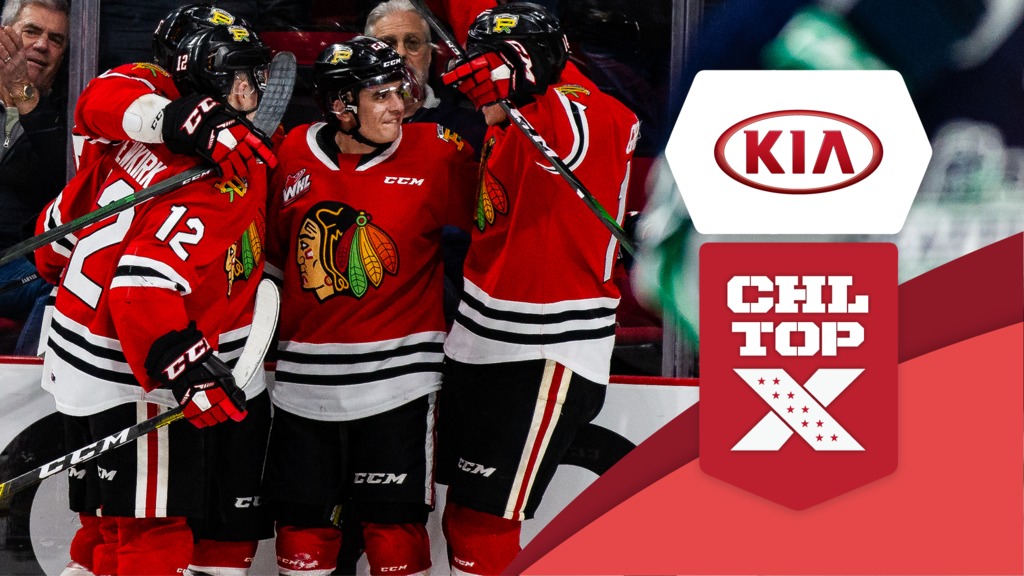 Toronto, Ont. – The Canadian Hockey League today announced the week fifteen edition of the Kia CHL Top-10 Rankings for the 2019-20 season. The weekly rankings of the CHL’s Top-10 teams are selected by a panel of National Hockey League scouts. The standings are reflective of before Wednesday’s WHL action.

Making the biggest jump this week were the Portland Winterhawks, who moved up four places to third on the rankings. Portland closed out 2019 with a triumph against the Tri-City Americans and a pair of wins over the Seattle Thunderbirds. Holding onto a slim lead at the top of the U.S. Division and Western Conference, the Winterhawks were aided in December by New York Islanders prospect Reece Newkirk, who led the team with 14 points (7G-7A) in 10 games. Up next for them is another trio of games against divisional opponents as they head onto the road to face the Spokane Chiefs on Friday, January 3 (7:05 p.m. PT).

Right behind them in the division, conference, and Kia CHL Top 10 Rankings are the Everett Silvertips, who slid a single spot after mixing a 7-5 win against the Kamloops Blazers with a pair of regulation losses. The trio of Montreal Canadiens prospect Cole Fonstad, captain Bryce Kindopp, and defenceman Jake Christiansen combined for 52 points (23G-29A) over their 11 games during December. The Silvertips will see action next with their annual trip to northern British Columbia to face the Prince George Cougars with the first game on Friday, January 3 (7:00 p.m. PT).

Holding strong in the eighth position for another week were the Edmonton Oil Kings, who closed out December with an 8-1-1-0 record. That included a home-and-home sweep of the Red Deer Rebels in the return from the holiday break. The highlight of the two-game set was a seven-goal third period in an 8-3 win Saturday in front of their home crowd, led by a hat trick from 2020 NHL Draft prospect Jake Neighbours. The Oil Kings will welcome the Moose Jaw Warriors to Alberta’s provincial capital on Friday, January 3 (7:00 p.m. MT) for their next game.

The Medicine Hat Tigers slipped a single spot, but still found themselves in the 10th position this week. Returning from the holiday break, they earned three of four points thanks to a 4-3 shootout loss against the Swift Current Broncos and a 3-1 win over the Calgary Hitmen. Rookie forward Cole Sillinger continued to impress, leading his team with 17 points (2G-15A) in December. The Tigers will wrap up a string of three-straight games against the Calgary Hitmen on Friday, January 3 (7:00 p.m. MT) at the Canalta Centre.

Staying in the Central Division, the Lethbridge Hurricanes earned an honourable mention. After winning a 5-4 battle in overtime against the Hitmen, the Hurricanes won both parts of a home-and-home series against the Broncos. Forward Logan Barlage raised his game in the month of December with 15 points (6G-9A) to lead his team the absence of a trio of Hurricanes attending the 2020 IIHF World Junior Championship. The Hurricanes will welcome the Seattle Thunderbirds to southern Alberta on Friday, January 3 (7:00 p.m. MT) for their next matchup.