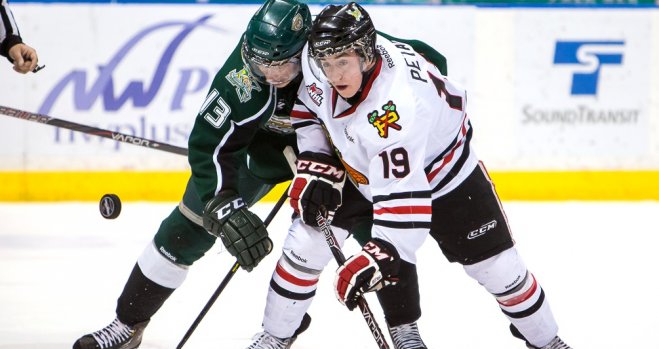 To say Nic Petan has been having a good year for the Portland Winterhawks would be the understatement of the century.  After all, a good year is what the Hawks expected and what Petan expected out of himself when the 2012-13 Western Hockey League season began.

However, to be leading the WHL in scoring while helping the Hawks to the top of the WHL standings is something that the 17-year-old from Delta, B.C., didn’t exactly see coming.  But, he’ll take it.

“Yeah, absolutely the goals have been exceeded so far,” said Petan, who has put up a WHL-leading 36 goals and 93 points in 53 games in his second season in the WHL after posting 14 goals and 35 points as a 16-year-old last year.

“I feel pretty good,” said Petan of his contributions to the Hawks’ remarkable run this season.  “Coming into the season, I knew I was going to get more playing time, but I didn’t know who I’d be playing with and what role I fit into.”

Selected with the 16th overall pick in the 2010 WHL Bantam Draft, Petan was chosen for his offensive abilities, having racked up an impressive 76 goals and 139 points for his North Shore Winter Club Bantam AAA team.  In Petan, the Winterhawks were confident they’d gotten a player who would develop into an impact forward at the WHL level.  However, nobody would have predicted the 5’9”, 166-lb pivot would dominate the way he has in just his second WHL season.

“He’s having a real good season,” said Winterhawks’ acting head coach and assistant general manager Travis Green.  “We knew Nic would have a bigger impact than he did last year, but to say we expected him to be performing at this level, we wouldn’t have thought that.

“Nic’s a guy who keeps on an even keel…he doesn’t get too high or too low,” Green added.

Green says, though, that the signs were there right from training camp that Petan was ready to take a big step in his development.  Having played for Canada’s Under-18 team at the Memorial for Ivan Hlinka tournament in August, and coming home with a Gold medal, Petan came into Hawks’ training camp with a different level of confidence and comfort.

“After watching him in training camp, just seeing the level of confidence he brought back gave us the impression he’d be an impact player this year,” said Green.  “He’s turned that into a remarkable season, and has been a real pleasure to coach.”

Though the Winterhawks lost a few big guns from last year’s squad such as Sven Baertschi, Brad Ross, Oliver Gabriel and Joe Morrow, they still had the highly talented Ty Rattie, sparkplug Brendan Leipsic and smooth-skating Derrick Pouliot back in the fold.  Coupled with the addition of top NHL Draft prospect Seth Jones, the Hawks knew they would still be a force in the WHL’s Western Conference.

Petan was fortunate to find himself playing on a line with Rattie, a St. Louis Blues prospect who put up 57 goals and 121 points last season, and Leipsic, whose energetic play helped him net 28 goals and 58 points last year while also getting drafted by the Nashville Predators.  The trio found instant chemistry, and has been terrorizing WHL defences all season.  Leipsic currently sits right behind Petan in the WHL scoring race while Rattie sits fourth in WHL scoring.

“Rattie, Leipsic and me definitely had that instant chemistry,” said Petan.  “Lots of credit goes to those two…they can both score and move the puck, and they have such a high level of smarts out on the ice.

“It’s been an honor to play with those guys all season, and hopefully we can keep it up for a long playoff run,” he said.

Eligible for the 2013 NHL Draft, Petan finds himself ranked 34th among North American skaters in NHL Central Scouting’s mid-term rankings, which would seem a bit low for a guy who is gunning to become the first 17-year-old scoring champ in the WHL since Pavel Brendl did it for the Calgary Hitmen in 1998-99.

For all his skill and offensive acumen, it’s questions about Petan’s size and strength that have so far kept out of the discussions of possible first-round picks at the 2013 NHL Draft.  Size, though, isn’t necessarily a hindrance in Petan’s prospects to reach the NHL and become an effective player at that level.

“People will always talk about smaller players and whether they can do it at the next level, but t definitely hasn’t hindered Nic in any way, so far,” said Green.

“When you look at the smaller players in the NHL, they all have some things in common that they have a great compete level and great hockey sense.

“I remember playing with Ray Whitney, and he’s a guy that’s not a big guy but has played a really long time because he had such great hockey sense and a real will to prove that he could play at the highest level,” said Green.  “When we talk about Nic, I see the similarities between him and Ray in that he’s such a smart player, such a skilled player, and his compete level is just as high.”

For Petan, flying under the radar doesn’t bother him.  Obviously, when it comes to talking about draft-eligible Winterhawks, most of the discussion centers around Petan’s team mate Seth Jones, who is considered a strong possibility to go first overall in this year’s draft.  Petan says having a guy like Jones around, as well as fellow draft-eligible team mates like Oliver Bjorkstrand, has helped make the process go a lot smoother.

“Definitely, with Seth, he’s ranked really high and he’s got all that attention on him so it’s good to be able to talk to him and take notes on how he handles it all,” said Petan, who enjoyed an eye-opening performance alongside Bjorkstrand at the 2013 Home Hardware CHL / NHL Top Prospects Game.

For all his individual success this year, what makes Petan most proud is how well his Winterhawks have performed this season.  Having been a dominant Club the previous two seasons, advancing all the way to the WHL Championship series in both 2011 and 2012, the Winterhawks have perhaps been even better this season, despite not having marquee names like the Baertschis, Ryan Johansens and the Nino Niederreiters.

Petan says this year’s edition of the Hawks is closer than ever, and a better team for it.

“I feel like we are such a unit this year, and it’s the closest team I’ve ever been on,” said Petan.  “The way we bond on and off the ice has really helped us.

“I feel like we’re the hardest working team in the WHL, and we try and bring a consistent level of work ethic into every game…so far, it’s worked good for us,” he said.