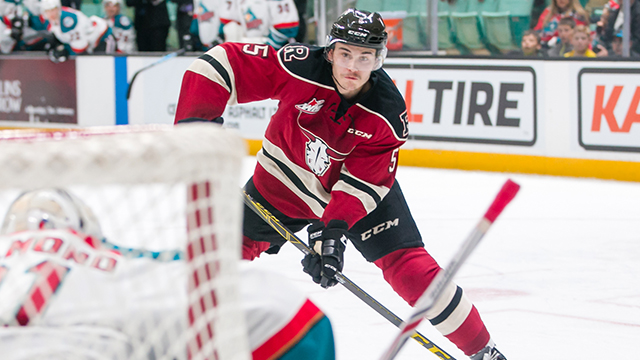 This certainly qualifies as a WHL Trade Deadline blockbuster.

Now relax… unless you’re anyone in the Eastern Conference not affiliated with the Regina Pats.

“Mahura and de Wit bring a considerable amount of skill and depth to our team,” said John Paddock, head coach and general manager of the Pats, in a team release. “We are excited to add to our club for the remainder of this season and for next year as well.”

If the Pats were heavy favourites in the Eastern Conference prior to the WHL Trade Deadline, this deal likely leaves the rest of the competition simply shaking their heads.

The Pats have stockpiled a powerful blend of youthful talent and veteran excellence.

Mahura and de Wit join the recently acquired veteran Wyatt Sloboshan (4-12-16), who was captain of the Saskatoon Blades prior to landing in Regina. Already in place is Pats captain and defending WHL scoring champion Adam Brooks (22-45-67), along with current WHL scoring leader Sam Steel (31-39-70). Then you’ve got highly-touted prospects for the 2017 NHL Draft in the form of Jake Leschyshyn (15-19-34) and Nick Henry (20-22-42). We haven’t even mentioned forwards Filip Ahl (18-14-32) and Austin Wagner (19-21-40) – both have already been tabbed by NHL clubs and are dangerous in their own right.

If you haven’t already figured it out, we’ve only just covered the Pats’ forward core.

Yes, this Regina Pats team already was and now, most certainly is, a team worth fearing from top to bottom, left to right, inside and out, upside and down.

Embroiled in a Central Division slugfest, the Rebels likely saw what happened down south in Lethbridge and figured the acquisition of Zablocki and the emerging Barteaux, along with a package of quality draft picks, provided enough to part with the veteran services of Mahura and de Wit.

Zablocki, a relatively local product hailing from nearby Wetaskawin, Alta., also finds himself upon the 2017 NHL Draft radar and brings valuable offensive abilities to the Rebels, having struck for 25 points (9G-16A) in 33 games this season. Originally taken with a fifth round pick (109th) at the 2013 WHL Bantam Draft by the Prince George Cougars, the 6-foot, 185-pound pivot has collected 62 points (27G-35A) in 105 career WHL regular season contests.

He showed chops in big games last season as well, adding another nine points (7G-2A) in 12 post-season dates with the Pats.

Taken with the 14th overall pick at the 2015 WHL Bantam Draft, the 6-foot-1, 170-pound product of Foxwarren, Man., has only skated in 19 career WHL regular season games. He represented Canada Red at the 2017 World U17 Hockey Challenge.

There’s plenty to like about Barteaux’s ability at both ends of the rink, and for the Rebels, he is only just beginning to tap into that at the WHL level.

“Lane and Dawson have been a credit to our organization,” Paddock said. “We wish them both all the best in Red Deer.”

The Pats carry a four-point lead on the Moose Jaw Warriors for first place in the competition East Division, though Regina has played 38 games to Moose Jaw’s 41.

The Warriors have been tinkering with their roster in hopes of closing that gap, adding veterans Spencer Bast and Branden Klatt on deadline day, after having shipped out Russian import Nikita Popugaev in exchange for Justin Almeida and Yan Khomenko earlier in the week.

As it stands, the Rebels sit third in the Central Division, trailing the second place Hurricanes by seven points, while the fourth place Edmonton Oil Kings remain two points back.

One thing is certain – all of this action will make for some dynamite dates on the calendar as the 2016-17 WHL regular season winds down.

The Pats return to the ice on Friday when they host reigning WHL Goaltender of the Week Rylan Parenteau and the Tri-City Americans.