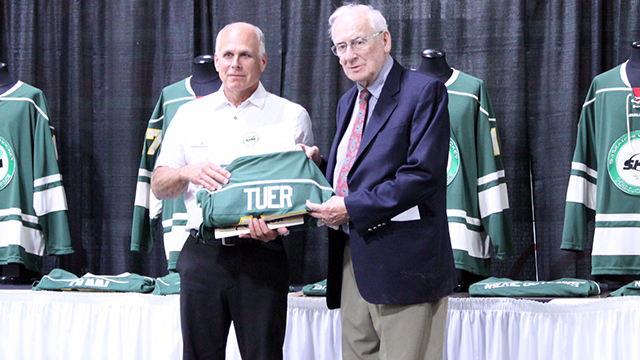 The Western Hockey League and the entire hockey world are mourning the loss of longtime scout Graham Tuer after his peaceful passing at the age of 87 on Tuesday morning.

“Graham Tuer was one of most respected and admired hockey volunteers in the Saskatchewan hockey system,” commented WHL Commissioner Ron Robison. “Graham was a driving force behind the creation of the highly successful Saskatchewan Development Model and his enormous contributions to the game at all levels will be sorely missed.”

Graham’s involvement in hockey in Saskatchewan spanned five decades. He worked in multiple capacities, as a general manager, scout, volunteer and administrator at every level of minor and junior hockey.

“Graham was truly one of the best people to ever meet,” said Regina Pats President Todd Lumbard. “He loved hockey, he loved the Pats and he treated everyone with a great deal of love and respect. He will be missed by so many people.”

Tuer was formerly the GM of the Regina Pat Canadians and won the Air Canada Cup in 1988. He went on to be the Assistant GM and scout for the Regina Pats before joining his son Al with the Moose Jaw Warriors as a special assistant to the GM for two years.

“Graham never had a bad word to say about anyone,” said Pats Head Coach and GM John Paddock. “He lived his life like we all wish we would have lived our own.”

Graham then spent 20 years with the Kelowna Rockets scouting staff as well as the NHL’s Central Scouting Service.

“We were very saddened this morning by the news of the passing of Graham,” said Kelowna Rockets President and GM Bruce Hamilton. “He was a great friend of the Rockets organization, wonderful person, and a very valued scout. Our thoughts and prayers are with the Tuer family.”

Tuer’s lifetime involvement with the game of hockey did not go unnoticed, his accolades over the course of his career include the Hockey Canada Order of Merit (2015), induction into the Regina Sports Hall of Fame (2012), recipient of the WHL Distinguished Service Award in 2010, named Regina Pats Key Builder (2010), SaskSport Volunteer of the Year Award (2008) and most recently was inducted into the Saskatchewan Hockey Hall of Fame in the Builder category this summer.

“The Saskatchewan Hockey community lost an influential member today with the passing of Graham Tuer,” said Kelly McClintock, SHA General manager. “Graham has been instrumental as an administer in hockey from Grassroots to Midget AAA and the Western Hockey League. Graham was a tireless supporter of the game right until his passing and positively impacted the lives of countless people in the province. His presence will be sadly missed.”

Graham was predeceased by his wife Verna and is survived by his four children Donna, Kathy, Al and Greg as well as eight grandchildren and seven great-grandchildren.

The Pats will hold a ceremony during the 2017-18 season to honour the memory of one of the greats, Graham Tuer.