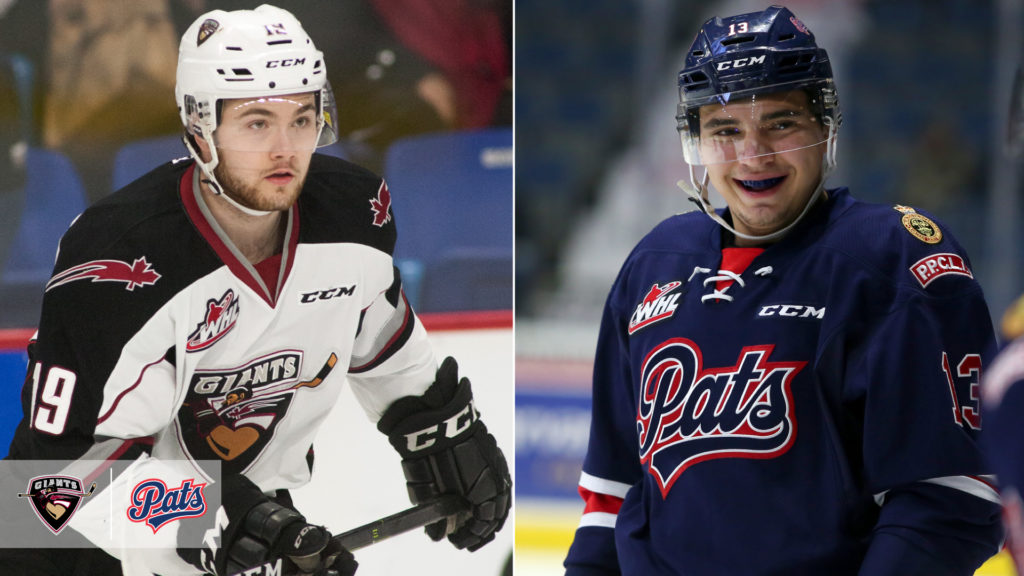 The Regina Pats and Vancouver Giants came together on a trade Tuesday ahead of Thursday’s 2019 Canadian Hockey League Import Draft.

Heading to the Pats is overage forward Dawson Holt while the Giants have received 2001-born forward Sergei Alkhimov.

In Holt, the Pats have added another key piece to their overage core for the coming season. The 5-foot-11, 195-pound Holt was a critical part of the Giants’ run last season as they captured the Western Conference Championship, recording 16 points (7G-9A) in 22 games during the 2019 WHL Playoffs. Three of those goals counted as game-winning goals.

“We are happy to add Dawson to our club,” said Pats VP of Hockey Operations and General Manager John Paddock. “He is a veteran guy who is coming off a really good playoffs and will be a big part of our team this season.”

A product of Saskatoon, Sask., Holt was originally selected by the Giants eighth overall at the 2014 WHL Bantam Draft. In 200 WHL regular season games, Holt has accrued 76 points (25G-51A), including two power-play goals, two short-handed goals, and three game-winning goals. Holt has 18 multi-point games in his WHL career, including a pair of three-point performances. He also has two multi-goal games to his credit during his time in the WHL.

In Alkhimov, the Giants have added a promising young forward to their ranks as the team transitions to be competitive once again next year.

The 5-foot-11, 213-pound product of Moskva, Russia was originally selected 47th overall by the Pats in the 2018 CHL Import Draft.

In 66 games with the Pats this past season, Alkhimov recorded 27 points (13G-14A), including three power-play goals, one short-handed goal, and two game-winning goals.

Alkhimov scored the first goal of his WHL career on September 28, 2018 against the Lethbridge Hurricanes. For the season, Alkhimov recorded four multi-point efforts, including three multi-goal games.

“We’re excited to welcome Sergei Alkhimov to the Vancouver Giants organization,” said Giants’ General Manager Barclay Parneta. “He’s shown the ability to score and compete at the WHL level and he’ll be a welcomed addition to our team.”

The move also sheds some light on the upcoming 2019 CHL Import Draft, scheduled for Thursday, June 27. The Pats own the seventh and 67th-overall selections in this year’s draft. The Giants own picks 59 and 119 in Thursday’s draft.

TRADE 🔁: The G-Men have acquired 2001-born forward Sergei Alkhimov from the @WHLPats in exchange for 1999-born forward Dawson Holt.