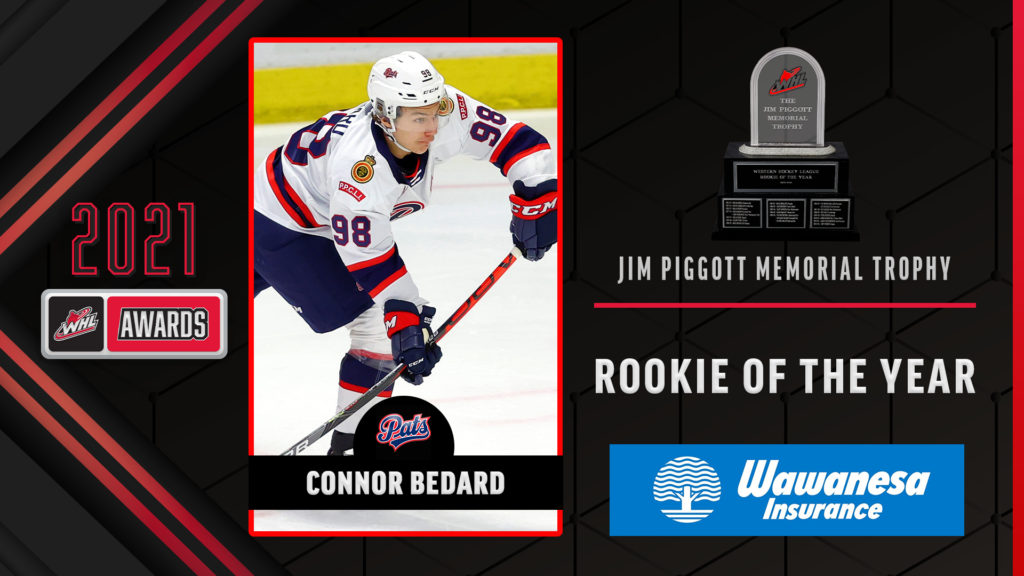 Bedard burst onto the scene after being selected first overall by the Pats in the 2020 WHL Draft, registering two goals in his WHL debut. In 15 games with Regina, the 15-year-old recorded 28 points (12G-16A) before joining Team Canada’s gold medal-winning entry at the 2021 IIHF World Under-18 Championship in Texas.

The product of North Vancouver, B.C. is the first WHL player to have been granted exceptional status by Hockey Canada and is eligible for the 2023 NHL Draft.

Bedard is the sixth member of the Regina Pats franchise to win the Jim Piggott Memorial Trophy as WHL Rookie of the Year and first since Jeff Friesen, who was awarded the trophy during the 1992-93 WHL season. He joins Friesen, Dale Derkatch (1981-82), Dave Michayluk (1980-81), Dennis Sobchuk (1971-72) and Ron Garwasiuk (1966-67) as Pats players to have been named WHL Rookie of the Year.

The Jim Piggott Memorial Trophy is presented annually to the player whose performance in their first season is deemed to be the most outstanding among all rookies.

* Denotes CHL Rookie of the Year