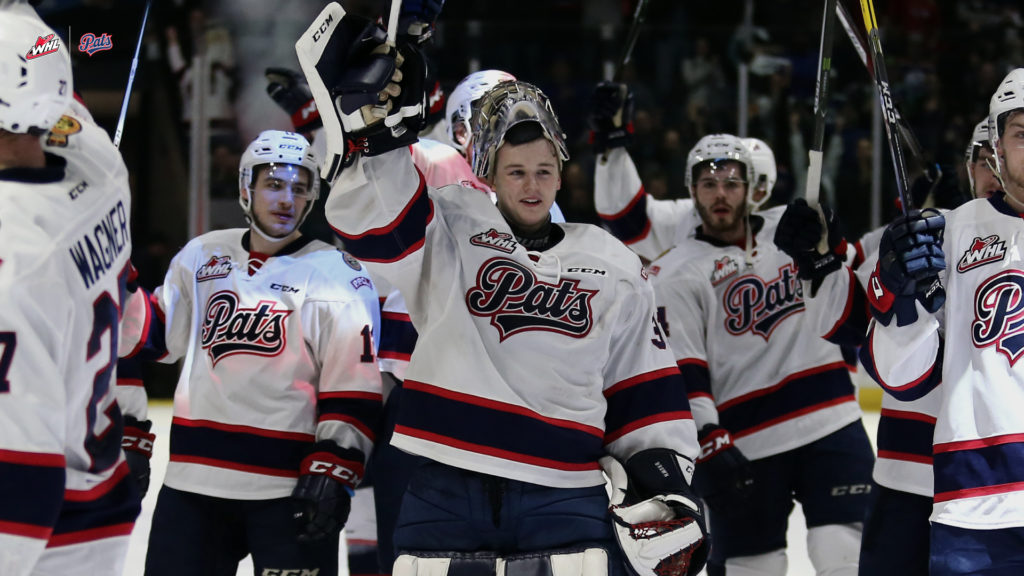 As a wild card team in the 2015-16 Western Hockey League Playoffs, the Regina Pats upset the Lethbridge Hurricanes in the opening round of play. That was just the tip of the iceberg – a gargantuan beast that fans saw in full force last season.

The 2016-17 WHL season was a banner year for the storied Pats franchise and now, entering their 100th season, they celebrate what was achieved while also looking ahead to what will certainly go down in history as one of the greatest years in the club’s incredible and extensive history books.

“Obviously, it’s a huge year for us with the Mastercard Memorial Cup and our 100th anniversary,” said Todd Lumbard, Pats president, at the WHL’s season opening media conference on Thursday in Regina. “The community is excited, the team is excited. It’s a fun time to be a part of the Regina Pats.

“There will be a lot of announcements [to come] about the 100th anniversary of the Pats and the Memorial Cup. There are lots of good things still to come. We’re trying to really engage our alumni, the community and really bring everybody together into the year ahead that we have. We want to thank people that have helped us along the way and show our community how much we appreciate their support.”

The first of many good things to come will be unveiled Saturday night (7 p.m. MT) when the Pats return home to the Brandt Centre where they will raise to the rafters a trio of banners for their achievements as East Division Champions, Eastern Conference Champions and Regular Season Champions.

Led by the top two scorers in the entire Canadian Hockey League, the Pats rolled to a WHL-best record of 52-12-7-1 during the 2016-17 season. In the process, they established new franchise marks for most points (112) and most wins (52). Newly-minted captain Sam Steel finished the year with 131 points (50G-81A), finishing one point ahead of then captain Adam Brooks, who hit the 130-point plateau (43G-87A) during his final year in the WHL.

As notable as those performances and banners may be, the Pats aren’t satisfied after losing Game 6 of the WHL Championship to the Seattle Thunderbirds in May.

With the crafty Paddock at the helm and behind the bench, there’s no doubt the Pats will once again contend to raise future banners, particularly in 2017-18. A double winner of WHL Coach of the Year and WHL Executive of the Year honours in 2016-17, Paddock has shown no hesitation to tinkering with his roster to find the right fit and leaning on his stars when everything is on the line.

The 2017-18 season not only serves as the millennium mark for the Pats, it also happens to be the 100th anniversary of the Mastercard Memorial Cup. Fittingly, Canada’s annual tournament for junior hockey supremacy will be hosted in the Queen City itself, meaning Paddock’s Pats will have the opportunity to win the final game of the campaign on the biggest stage ever.

“There’s a lot of excitement [this season],” said veteran goaltender Tyler Brown during Thursday’s media availability in Regina. “We sold 5,000 season tickets. All the players know that and there’s a lot of hype around our team this year. I definitely think there’s a different feeling right now.

“We’ve just got to take it one game at a time this year. We know what the big picture is at the end. But we talk about enjoying the process of the season. Every game is going to have a learning curve. There’s always going to be something new we have to bring to the table.”

Brown turned in an outstanding post-season performance, going 14-9 with a 2.56 goals-against average and .915 save percentage. Now in his final season of junior eligibility, the product of Winnipeg, Man., is motivated and ready to backstop his club to another lengthy run.

While Brooks – the heart and soul of the Pats – has moved on to pro hockey life within the Toronto Maple Leafs organization, the leadership responsibilities fall to Steel, who was named the club’s captain prior to departing for NHL training camp with the Anaheim Ducks.

Steel is expected to return to the club where he will aim to once again dictate the pace of play in the Eastern Conference and defend his crown as winner of the WHL’s Four Broncos Memorial Trophy for WHL Player of the Year.

Though he doesn’t plan on trying to step directly into the shoes of Brooks, newcomer Matt Bradley will wear the old captain’s sweater, No. 77, and provide a new presence for the Queen City crew.

The 20-year-old product of Surrey, B.C., Bradley was acquired in an off-season trade that sent goaltender Jordan Hollett to the Medicine Hat Tigers. In Regina, Bradley will provide the Pats with added grit and goal-scoring ability, not to mention veteran leadership. He’s coming off a year that saw him collect a career-high 77 points (34G-43A) in 70 games with the Tigers.

“It’s been awesome [coming to Regina],” Bradley said. “There are similar game styles between here and Medicine Hat. But all the players have been amazing – first class. It’s been a great time so far.

“It’s a make-or-break year for me… Getting traded here, to a team of this caliber, I’m going to be playing with great players all year. Hopefully, they’re going to make me better and hopefully I can make them better as well.”

Ultimately, it’s a make-or-break year for the veteran core of the Pats. The overage group of Bradley, Brown and two-way centre Wyatt Sloboshan will graduate following the campaign. Steel and stud defenceman Josh Mahura will likely advance to the pro ranks when the year comes to an end. While plenty of pieces will remain, the core leadership group will be moving on, making this season perhaps more important than any that’s come before it.

While there may be plenty of pressure on the Regina Pats to make the most of their 100th year during the 100th celebration of the Mastercard Memorial Cup, this a group that carries with it an immense potential.

What can be guaranteed is there will be no shortage of excitement and memorable experiences to come in the Queen City throughout the 2017-18 WHL season.

The Pats open their 2017-18 home schedule Saturday night (7 p.m. MT) at the Brandt Centre where they will raise their championship banners prior to taking on the Brandon Wheat Kings.

Established in 1917, the Regina Pats are the oldest major junior hockey franchise in the world to continuously operate in their original location and under the same club name.

Originally named after Princess Patricia of Connaught, granddaughter of Queen Victoria, the Pats have long been associated with the Princess Patricia’s Canadian Light Infantry. That association can be seen today in the shoulder patch displayed prominently on the Pats uniforms.

The Pats franchise has won four Memorial Cup championships – 1925, 1928, 1930 and 1974. They’ve also made the most Memorial Cup appearances of any major junior team, having been to the big dance 15 times, the most recent coming in 2001, when they hosted the tournament.

While 2017 marked the Pats return to the WHL Championship Series for the first time since 1984, the franchise has not won the WHL crown since 1980, when they knocked off the Victoria Cougars. That victory serves as the second WHL title in franchise history. The Pats other WHL Championship came in 1974 when they swept Calgary in four games.