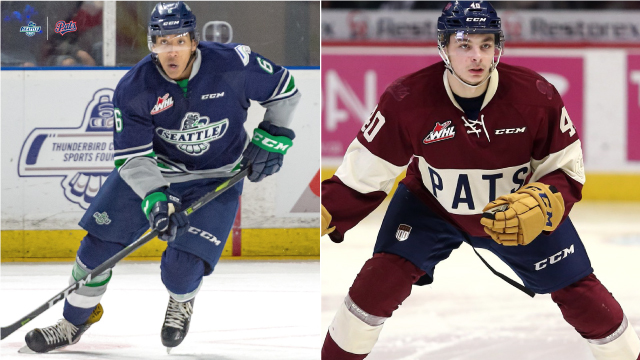 The 2018 Mastercard Memorial Cup host Regina Pats made a deal with an old rival Wednesday.

Coming from the 2017 Ed Chynoweth Cup champions Seattle Thunderbirds is 19-year-old defenceman Aaron Hyman. In exchange, the Pats have dealt 17-year-old defenceman Owen Williams and a second-round pick in the 2019 Western Hockey League Bantam Draft to the U.S. Division club.

Hyman, a 6-foot-5, 221-pound product of Calgary, Alta. will join a Pats club that is stocking up for a run at this year’s Mastercard Memorial Cup. Hyman will also likely get to add his name to a very exclusive list of players to play for the title on different teams in back-to-back years.

“Aaron brings a ton of size and playoff experience to our back end,” said Pats Head Coach and GM John Paddock. “He won a league championship and played in the Memorial Cup last season and will fit in great with our group.”

Drafted by the Calgary Hitmen in the third round, 49th overall, of the 2013 WHL Bantam Draft. In 136 career WHL games, Hyman has 26 points (4G-22A), including 59 penalty minutes and one power-play goal.

In addition to the pick headed the other way is Williams, a 6-foot-1, 180-pound Delta, B.C. product. Williams was draft by the Pats in the ninth round, 190th overall, of the 2015 WHL Bantam Draft. In 29 games with the Pats, Williams had one assist and six penalty minutes.

The WHL’s Trade Deadline is set for 3 p.m. MT. All the trades will be listed on the WHL’s Live Blog.