Pats acquire Davidson from Blazers in exchange for Smith 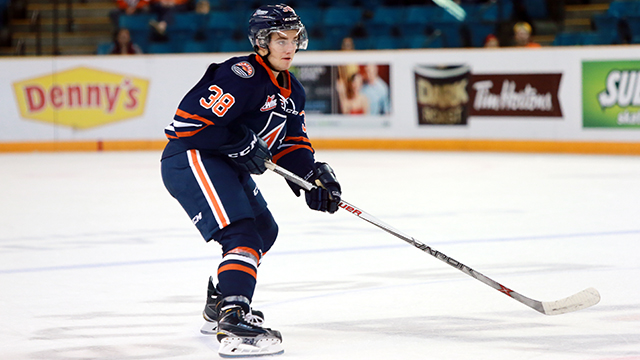 The Regina Pats blueline has been bolstered a day after the WHL trade moratorium ended, with the Kamloops Blazers sending 18-year-old defenceman Dawson Davidson to the Queen City in exchange for 18-year-old forward Luc Smith.  The two teams announced the deal Tuesday morning.

Davidson, a product of Moosomin, Sask., is a veteran of 124 career WHL regular season games, having tallied 63 points (12G-51A) in the process. Originally a third round pick (58th) of the Blazers at the 2013 WHL Bantam Draft, the 5-foot-11, 181-pound rearguard was passed over at the 2016 NHL Draft, but attended training camp with the Pittsburgh Penguins this fall. Since then, he has stacked up 15 points (3G-12A) in 32 games with the Blazers.

In Regina, Davidson will step onto the blueline for a Pats team currently missing defenceman Sergey Zborovskiy, who is representing Russia at the 2017 IIHF World Junior Championship in Toronto and Montreal.

In addition to being without Zborovskiy, the Pats return from the holiday break without the services of Swedish forward Filip Ahl, who is also representing his nation at the World Junior Championship.

Smith will provide some depth for a Blazers squad that is without forward Rudolfs Balcers, who is skating for Latvia at the World Junior Championship.

Both the Blazers and Pats return to action tonight, with Kamloops visiting the Kelowna Rockets, while Regina plays host to the Brandon Wheat Kings.