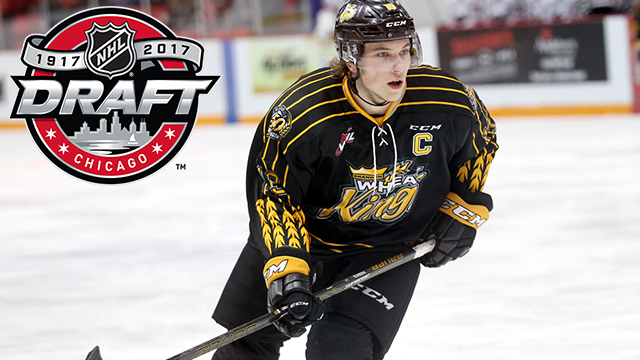 Led by potential first-overall pick Nolan Patrick, a total of 22 elite Western Hockey League prospects will aim to elevate their stock ahead of the 2017 NHL Draft as they attend the 2017 NHL Scouting Combine in Buffalo, N.Y., this week.

Atop the charts with three players at the event is the Tri-City Americans, represented by forwards Morgan Geekie and Michael Rasmussen, and import defenceman Juuso Valimaki.

Of the WHL’s 22 member clubs, 15 teams will be represented at the annual scouting event.

With the 2017 NHL Draft three weeks away – June 23 to 24 in Chicago – this serves as one final opportunity for scouts to get a good look at potential prospects and also provides one last gasp for those aspiring players hoping to leave an impression with NHL brass.

The annual event began Monday and runs through Saturday, with players put through a gauntlet featuring interviews, medical examinations and fitness testing.

The highly-anticipated portion of the combine – fitness testing – is set to take place Friday and Saturday at the HarborCenter in Buffalo. Saturday’s fitness testing can be watched live on Sportsnet.ca from 9:30 a.m. to 12:30 p.m. ET/ 7:30 a.m. to 10:30 a.m. MT.

Y-balance testing assesses strength, flexibility and core control while helping identify a player’s risk for lower-body injury. The functional movement screen puts players through a set of seven tests to assess mobility and stability. Grip strength is exactly as described, while the dreaded VO2 max test assesses how much oxygen a player utilizes during maximum exercise (performed on an exercise bike), while also monitoring heart rate.

Players must be medically cleared before participating in the fitness testing. A big question mark heading into the 2017 NHL Scouting Combine was the status of Patrick, the potential first-overall selection and captain of the Brandon Wheat Kings. The 2016 WHL Playoffs MVP battled injuries throughout the 2016-17 campaign, dressing in only 33 regular season contests before being felled by a lower-body ailment that kept him out of the Wheat Kings’ first-round series in which they fell in four straight outings to the Medicine Hat Tigers.

Mike Morreale, staff writer for NHL.com, reported Wednesday afternoon Patrick was cleared to participate in the full slate of fitness testing, providing NHL Central Scouting’s top-ranked prospect an opportunity to show he is completely recovered from his bumps and bruises.

Nolan Patrick just informed me that he is medically cleared to perform all tests at the NHL Combine. And he will test.

Patrick has already been a busy man this week in Buffalo, with it reported he sat down for interviews with 13 different NHL clubs.

Including the 22 WHL players participating in the festivities, a total of 104 prospects have been invited to the event (10 goaltenders, 36 defencemen, 58 forwards). Of the 104 players in attendance, 84 are from North America with 20 coming from international countries.