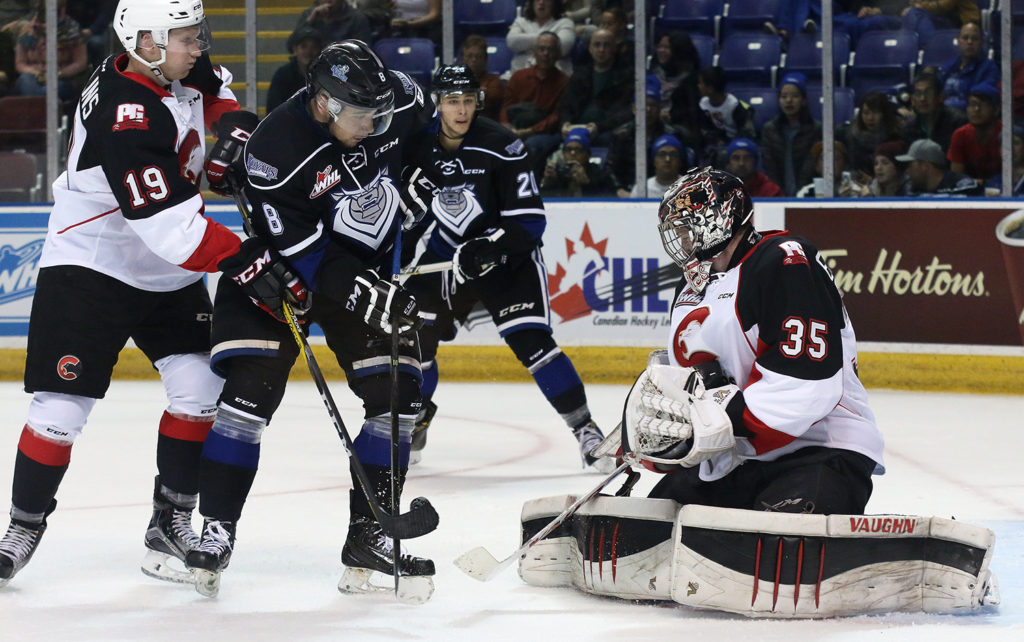 After weeks of anticipation, the Western Hockey League opened its 51st season on Friday night, with nine games spread across Western Canada.

Of Friday’s nine contests, four needed extra time to get to a decision, while some teams put it into overdrive and throttled some monstrous numbers.

In Kamloops, the Blazers exacted serious revenge on the Kelowna Rockets, trouncing their Okanagan rival by a 9-2 final. Just down the highway in Langley, the Everett Silvertips spoiled a big night for the Vancouver Giants, rolling to a 7-3 triumph. Out east, the Saskatoon Blades put up a five-spot, getting past the Broncos in Speedy Creek.

In the Blazers barnburner, it was defenceman Joe Gatenby clicking for two goals and one assist to ground his old Rockets teammates while soaring to the top of the WHL scoring charts, albeit after opening night. In fact, seven different players, including Gatenby, registered three-point performances on Friday night. Jesse Shynkaruk (Blades), Simon Stransky (Raiders), Ryley Lindgren (Hurricanes), Collin Shirley (Blazers), Dawson Davidson (Blazers), Matt Fonteyne (Silvertips) and Mark Rubinchik (Blades) all got in on the action.

Kootenay ICE 2 at Calgary Hitmen 3 (SO)

Hitmen veteran Tyler Mrkonjic (1) scored 1:18 into the third period, knotting this Central Division battle with the ICE at 2-2, eventually forcing overtime in Calgary.

In the overtime period, the Hitmen were able to jam a puck past ICE goaltender Payton Lee during a goal-mouth scramble. Igniting the red light, Calgary emptied from the bench, celebrating what appeared to be a victory. Meanwhile, Lee protested and his teammates headed down the hallway to the dressing room.

Across the ice at the timekeepers box, on-ice officials were on the phone with video review and quickly overturned the goal, bringing both teams back to the ice.

Overtime solved nothing before left winger Taylor Sanheim beat Lee in the shootout, ending a five-round skills competition and giving Calgary a 3-2 win.

Zak Zborosky (1) scored on a power play and Tanner Sidaway (1) also found the back of the net for Kootenay. Rookie right winger Murphy Stratton (1) registered the other marker for Calgary.

Between the pipes, Cody Porter made 28 saves plus four more in the shootout to earn his first victory of the season for the Hitmen. At the other end, Payton Lee steered aside 25 shots and another three in the shootout, taking the loss.

Kootenay was 1-for-4 with the man advantage, while Calgary was 1-for-5.

After 20 minutes, this game remained a contest, as Gatenby (1) scored with the man advantage to give the Blazers a 1-0 lead heading into the first intermission.

Then the second period happened.

After Rockets right winger Kole Lind (1) knotted the game 1-1 only 34 seconds into the middle period, the Blazers ignited for four consecutive goals, blowing this B.C. Division matchup wide open before eventually taking a 6-2 lead into the dressing room after 40 minutes.

At the end of this one, Kamloops was an astounding 6-for-10 with the man advantage, while Kelowna went 1-for-8.

@blazerhockey have blown the lid off this thing —- six power play goals and now lead 9-2.

It was a rough night for the Rockets goaltenders. Michael Herringer took the loss, allowing four goals on 18 shots, before Brodan Salmond came on in relief. Things didn’t go much better for the rookie, as he allowed five goals on 16 shots.

At the other end, Dylan Ferguson claimed victory, making 29 saves.

The Tigers outshot the Hurricanes by a 43-20 margin Friday night, but nothing was spoiling this party as Lethbridge raised its Central Division championship banner before skating to a 4-2 win over Medicine Hat.

The Hurricanes stormed to a 2-0 lead after 20 minutes, courtesy power-play goals from rookie defenceman Calen Addison (1) and veteran Ryley Lindgren (1).

Calen Addison (with his first ever WHL goal) puts Lethbridge up 1 – 0 #WHLOpeningWeek pic.twitter.com/k37iifZW8e

Matt Bradley (1) got the Tigers on the board in the second period, but Brady Reagan (1) restored the two-goal edge for the ‘Canes late in the period.

Forward Jordy Bellerive (1) made it 4-1 early in the final period before Ryan Jevne (1) rounded out the scoring on behalf of Medicine Hat.

Addison finished the night with two points, while Lindgren collected three for Lethbridge.

The Tigers finished 2-for-6 on the power play, while the ‘Canes were 2-for-5.

Stuart Skinner stood on his head, making 41 saves for the win, while 16-year-old rookie Duncan McGovern couldn’t maintain his pre-season momentum as he was victimized four times on 20 shots.

The Wheat Kings spoiled a two-goal lead as the Warriors stormed from behind to claim a 3-2 overtime victory Friday night in Moose Jaw.

Nolan Patrick (1) and Stelio Mattheos (1) tallied in the first period to get Brandon ahead 2-0.

The Warriors mounted their comeback in the dying minutes of the third. First, Ryan Bowen (1) scored to make it 2-1 with 1:51 remaining. Then, with only four seconds on the clock, Jayden Halbgewachs (1) knotted the game 2-2, forcing overtime.

All it took was 29 seconds into free hockey for Tanner Jeannot (1) to complete the comeback, stunning the visiting Wheaties.

Brody Willms made 32 saves to snag the win for Moose Jaw, while 20-year-old Jordan Papirny made 28 saves in a losing cause.

The Oil Kings struck late to force overtime, before stealing victory from the host Rebels Friday in Red Deer.

Edmonton’s blueline got the job done Friday, as Kyle Yewchuk (1) scored his first career WHL goal to tie the game 2-2 with 2:38 to go in regulation. After that, captain Aaron Irving (1) notched the dagger, scoring 26 seconds into overtime to give his Oil Kings the win.

Akash Bains (1) and Evan Polei (1) responded for the Rebels, while Tyler Robertson (1) had the other goal for Edmonton.

Edmonton goaltender Patrick Dea knocked down 24 pucks for the win, while rookie Riley Lamb stopped 30 of 33 for Red Deer.

.@stranas83 supplied the offence in a 4-3 OT win in our season opener. #WHLOpeningWeek

As the clock wound down, Stransky (2) tickled the twine for the second time, giving Prince Albert the win with 2:03 to go in overtime.

Riley Woods (1) and Chase Harrison (1) scored the other tallies for the Pats, while Austin Glover (1) rounded out the scoring with a second-period power-play marker.

The Raiders finished 1-for-4 with the man advantage, while the pats were 1-for-3.

Prince Albert sophomore Ian Scott did his part, blocking 42 pucks for the win, while Regina goaltender Tyler Brown was beaten four times on 30 shots in the loss.

The Blades scored twice in the first period and three times in the third period, scoring an emphatic opening-night win over the Broncos in Swift Current.

Mason McCarty (1), Josh Bruce (1) and Logan Christensen (1) got in on the scoring for Saskatoon, while Russian import Artyom Minulin (1) was the lone responder for Speedy Creek.

The Blades went 1-for-7 with the power play, while the Broncos were 1-for-4.

Newly-acquired Logan Flodell made 21 saves for a Blades win, while Taz Burman gave up five goals on 35 shots in the Broncos crease.

The Silvertips scored five times in the first period and that’s all that was necessary to spoil the Giants opening game at the Langley Events Centre, which included a pre-game tribute to the late, great ‘Mr. Hockey’ Gordie Howe.

Bryce Kindopp (1), Jake Christiansen (1) and Sean Richards (1) rounded out the scoring for Everett, while Dawson Holt (1, 2) scored twice for the Giants. Jack Flaman (1) scored in the final minute of regulation to close out the scoring for Vancouver.

The Silvertips converted on 2-of-4 man advantages, while the Giants went 0-for-3.

Ryan Kubic toughed it out from start to finish for Vancouver, surrendering seven goals on 33 shots. At the other end, Mario Petit made 20 saves for the win.

Apparently Friday was a night designated for spoiling the host’s party.

The Cougars jumped on that wagon, scoring a 3-1 victory over the Royals, who raised their B.C. Division and WHL Regular Season Championship banners to the rafters at Save-On-Foods Memorial Arena prior to puck drop.

The banners have been raised to the rafters of the SOFMC! Victoria closes their weekend series against PG tomorrow night!

Max Martin (1) added the other goal for the Cougars, while Ty Westgard (1) potted the lone marker for the Royals.

Griffen Outhouse made 17 saves in a losing cause.

Saturday in the WHL (10 games)