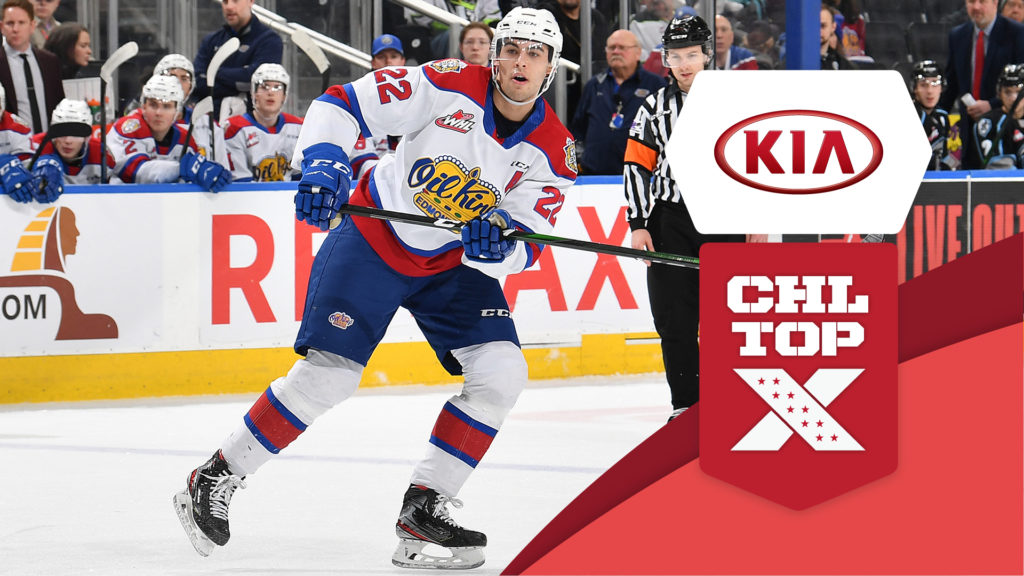 Toronto, Ont. – The Canadian Hockey League today announced the week 20 edition of the Kia CHL Top-10 Rankings for the 2019-20 season. The weekly rankings of the CHL’s Top-10 teams are selected by a panel of National Hockey League scouts.

The Portland Winterhawks moved into the third spot this week and are the Western Hockey League’s top-ranked team. Portland took a pair of points from their trio of games this week, becoming the first team to clinch a spot in the 2020 WHL Playoffs as a result. On Monday, the team’s leading scorer and 2020 NHL Draft prospect Seth Jarvis was named the WHL McSweeney’s Player of the Month for January after registering 29 points (11G-18A) in 10 games. The Winterhawks return to action on Friday, February 7 (7:05 p.m. PT), beginning a weekend set against the Kelowna Rockets at Prospera Place.

Holding steady in the fifth spot for another week, the Edmonton Oil Kings are once again the top team in the WHL’s overall standings. Playing in just a single game over the weekend, the Oil Kings extended their winning streak to three games with a 4-1 win over the visiting Winnipeg ICE. New York Rangers prospect Matthew Robertson is finding his stride at the right time, with the Oil Kings defenceman posting 11 points (3G-8A) in 12 games during January. In the midst of a six-game home stand, the Oil Kings will play host to the Red Deer Rebels on Friday, February 7 (7 p.m. MT) at Rogers Place.

Also reclaiming their spot for another week are the Everett Silvertips, who find themselves in seventh place in the weekly rankings. In their lone game of the week, the Silvertips took down the conference-leading Winterhawks by a 4-3 score, despite facing a 2-0 hole in the second period on home ice Friday. Captain Bryce Kindopp sparked the comeback performance with a pair of goals in the 250th game of his WHL career, giving him 32 on the season and 102 for his WHL career. He’s now 10 goals away from tying former teammate Patrick Bajkov for the all-time lead in franchise history. The Silvertips will take to the road for three games this coming weekend, facing the Tri-City Americans on Friday, February 7 (7:05 p.m. PT) at the Toyota Centre.

Sliding a pair of spots in the rankings this week, the Kamloops Blazers occupy 10th place in this week’s rankings. The Blazers began their week with a 4-2 win against the Spokane Chiefs before dropping 5-4 and 3-2 results to the Vancouver Giants, with the former of those two coming in overtime. 2020 NHL Draft prospect Connor Zary remained hot in January, posting 17 points (8G-9A) in nine games, including six multi-point games. The Blazers will make their final trip of the regular season to Vancouver Island this coming weekend, taking on the Victoria Royals in a pair of contests at Save-On-Foods Memorial Arena. Puck drop for the first game is on Friday, February 7 (7:05 p.m. PT).

Earning an honourable mention this week are the Lethbridge Hurricanes. The Hurricanes split their weekend games in northern Saskatchewan, dropping a 4-1 contest to the Prince Albert Raiders Friday before topping the Saskatoon Blades by a 4-3 score Saturday. Overage forward Brett Davis led the charge in Saturday’s win, scoring a pair of goals. He now has seven points (5G-2A) in six games since being re-acquired by the Hurricanes on January 6. The Hurricanes will take on Davis’ old team, the Red Deer Rebels, at the Westerner Park Centrium on Wednesday, February 5 (7 p.m. MT).