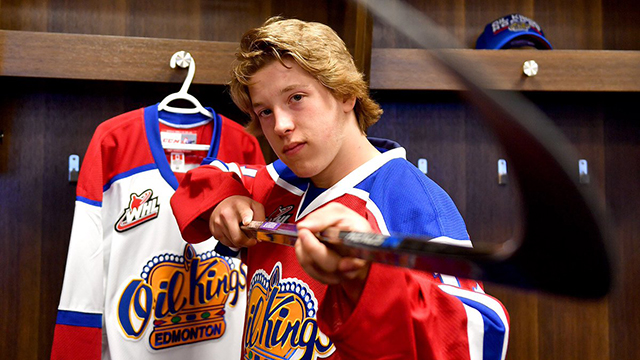 Neighbours was selected by the Oil Kings in the first  round (fourth overall) in the 2017 WHL Bantam Draft and played last season with the Pursuit of Excellence Bantam Prep team (CSSBHL) where he was third in league scoring with 68 points (27G-41A) in 30 games.

“It’s an unbelievable feeling,” Neighbours said. “I couldn’t be happier to sign with the Oil Kings. I look forward to the camps coming up and hopefully cracking the roster when I’m 16.”

The 5-foot-11, 195-pound Airdrie, AB native also collected 11 points (5G-6A) in five playoff games this past season in the CSSBHL, and appeared in seven games in the 2017 Western Canada Selects U15 Tournament collecting five points (2G-3A).

“We are very pleased to announce Jake’s signing,” Hansch said. “Jake is a player that steadily improved throughout the year and we really feel his game and personality will fit in nicely with our program.

Neighbours will be one of 24 Oil Kings prospects attending the 2017 Development Camp starting tomorrow, Friday, May 26 at Rogers Place.