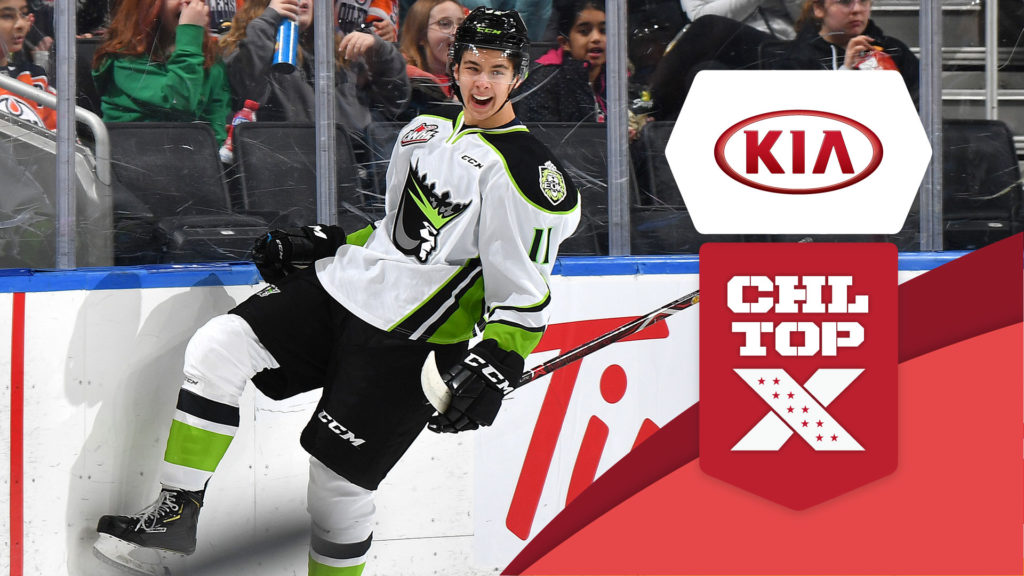 Toronto, Ont. – The Canadian Hockey League today announced the week twenty-four edition of the Kia CHL Top-10 Rankings for the 2019-20 season. The weekly rankings of the CHL’s Top-10 teams are selected by a panel of National Hockey League scouts.

After taking over the top spot in the Western Hockey League’s U.S. Division, Western Conference, and overall standings, the Everett Silvertips are the top-ranked WHL team this week, coming in at fourth. Pushing their winning streak to 10 games, the Silvertips won all four of their matchups over the past week, beating the Tri-City Americans, topping the Kelowna Rockets in both ends of a home-and-home set, and beating the Portland Winterhawks Sunday on home ice. Calgary Flames prospect Dustin Wolf was recognized for an outstanding February with the WHL Vaughn Goaltender of the Month Award Monday. Wednesday, captain Bryce Kindopp signed an entry-level contract with the Anaheim Ducks while defenceman Jake Christiansen signed an entry-level deal with the Columbus Blue Jackets. The Silvertips will continue a four-game home stand when they play host to the Americans on Friday, March 6 (7:35 p.m. PT) at Angel of the Winds Arena.

For another week, the Edmonton Oil Kings held steady in the fifth spot of the Kia CHL Top 10 Rankings. The Oil Kings earned three of a possible four points from two road games over the weekend, losing in a shootout to the Lethbridge Hurricanes before shutting out the Red Deer Rebels. After leading all rookies in scoring during February, Dylan Guenther was named the WHL Rookie of the Month on Monday. Guenther posted 17 points (7G-10A) in 11 games as the Oil Kings opened up an 11-point lead in the Central Division and WHL’s Eastern Conference standings. Eligible for the 2021 NHL Draft, Guenther has 58 points (26G-32A) in 55 games this season, including eight power-play goals and three game-winning goals. The Oil Kings will welcome the Spokane Chiefs to Rogers Place on Wednesday, March 4 (7 p.m. MT).

Rounding out a trio of WHL teams in the top six of this week’s rankings, the Winterhawks secured the sixth spot. In three weekend road games, the Winterhawks topped the Americans and Seattle Thunderbirds before falling to the Silvertips. 2020 NHL Draft prospect Seth Jarvis had another strong weekend, posting five points (4G-1A) over the first two games before being held off the scoresheet Sunday. Jarvis became the second player to surpass the 90-point plateau this season, recording 91 points (40G-51A) in 55 games, including eight power-play goals, two short-handed goals, and seven game-winning goals. The Winterhawks return to action on Wednesday, March 4 (7 p.m. PT), playing host to the Americans at Veterans Memorial Coliseum.

Earning honourable mentions this week are the Lethbridge Hurricanes and Spokane Chiefs.

The Hurricanes earned wins over the Oil Kings and Calgary Hitmen while also falling to the Brandon Wheat Kings. Buffalo Sabres prospect Dylan Cozens extended his point streak to four games, with eight points (4G-4A) in that span, including a hat trick Saturday against the Wheat Kings. The Hurricanes will begin the second half of their B.C. Division road trip with a matchup against the Prince George Cougars at the CN Centre on Wednesday, March 4 (7 p.m. PT).

For the Chiefs, they extended their winning streak to six games, taking down the Thunderbirds and Americans on home ice over the weekend. Friday’s 9-2 win over Seattle was highlighted by a hat trick and eight-point performance by captain and New Jersey Devils prospect Ty Smith. Smith broke his own franchise record for points in a single game by a defenceman while also recording just the fifth hat trick by a defenceman in franchise history, earning him the WHL On the Run Player of the Week honours. The Chiefs will begin the second half of their Central Division road trip on Wednesday, March 4 (7 p.m. MT) against the Oil Kings at Rogers Place.