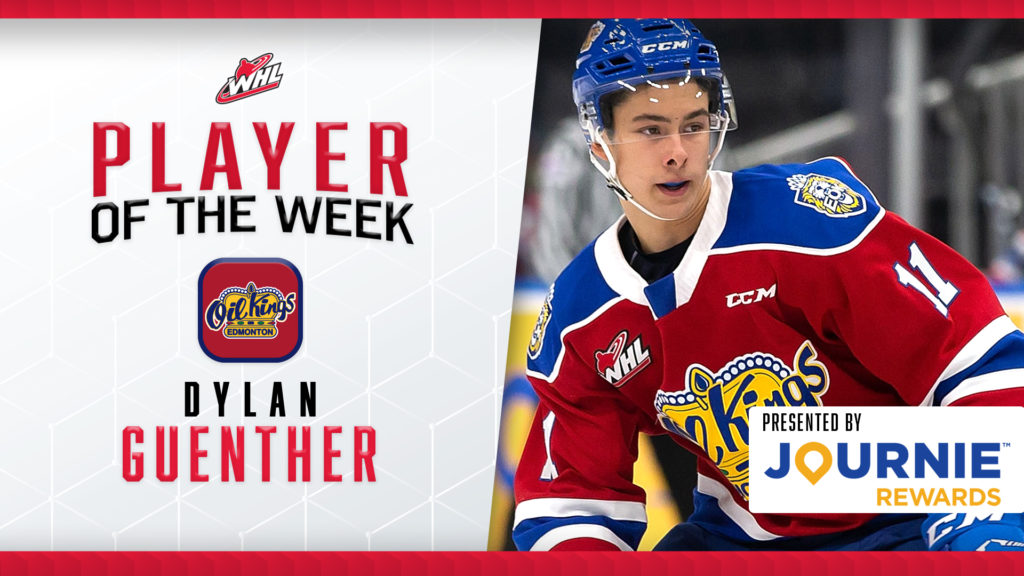 Guenther, 17, opened the 2020-21 WHL Regular Season with a four-point performance, including two goals, in a 7-1 victory over the Lethbridge Hurricanes on Friday night at the Downtown Community Arena in Edmonton. Guenther’s first goal of the season was of the power-play variety and came 1:47 into regulation. He added a second goal in the second period to give the Oil Kings a commanding 4-1 lead. Guenther contributed two primary assists in the win, including setting up Kaid Oliver for the eventual game-winner on another power-play.

The 6-foot-1, 181-pound right winger kept the good times rolling on Saturday night in Lethbridge, recording another four points, including two more goals, in a 7-2 win over the Hurricanes. For the second straight night, the product of Edmonton opened the scoring for the Oil Kings, striking 1:59 into the first period. His second goal of the night and fourth of the season came midway through the third period to ice the Oil Kings victory. For the second straight night, Guenther contributed a primary assist on a power-play goal from Oliver. He also added a secondary helper on captain Scott Atkinson’s first goal of the season.

After opening weekend of the 2020-21 WHL Regular Season, Guenther leads the WHL in scoring with having tallied eight points (4G-4A).

A second-year forward, Guenther is a highly-touted prospect for the 2021 NHL Draft, listed as an ‘A’ prospect on NHL Central Scouting’s Players to Watch List.

Originally selected by the Oil Kings with the first-overall pick in the 2018 WHL Draft, Guenther has skated in 68 career WHL regular season games, registering 71 points (33G-38A). He enjoyed an outstanding start to his WHL career in 2019-20, winning the Jim Piggott Memorial Trophy for WHL Rookie of the Year after collecting 59 points (26G-33A) in 58 games.

Next up, Guenther and the Oil Kings are scheduled to host the Medicine Hat Tigers on Friday, March 5 at 7 p.m. MT.