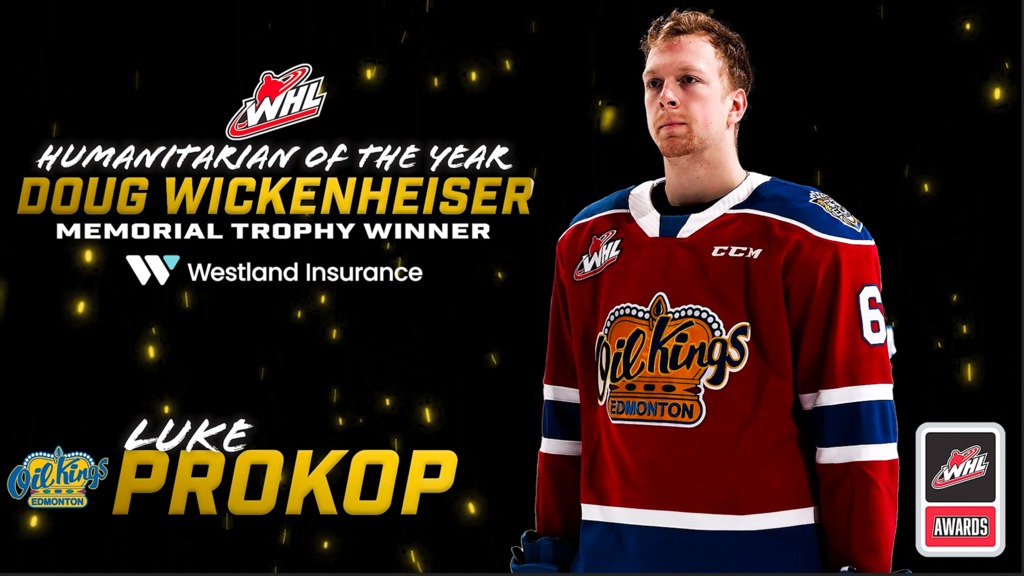 The Doug Wickenheiser Memorial Trophy presented by Westland Insurance, is awarded annually to the WHL Humanitarian of the Year.

Prokop inspired the hockey community and the LGBTQ2S+ community in a ground-breaking way on July 19, 2021 when he came out as the first openly gay player signed to an NHL contract. Since then, the Edmonton-born Prokop has worked tirelessly to fight for inclusion in hockey and across sport.

A strong advocate for the Kids Help Phone, Prokop believes in this vital service as a support mechanism for youth in the LGBTQ2S+ community. In an effort to put his support behind the Kids Help Phone, Prokop established the Shots for Impact program, donating $10 for each of his shots on goal this season and securing matching donations from the Edmonton Oil Kings, Nashville Predators, and Edmonton Oilers Community Foundation.

“I’m honoured to accept this award this year,” Prokop said. “I’d like to thank my family and friends who have helped support me throughout this season, my teammates in Edmonton, who have been awesome, as well as Kids Help Phone. They’re one of the major reasons why I created this initiative – I can’t thank them enough.”

Prokop played a vital role in the development of the Edmonton Oil Kings first ever Pride Day Game, hosted on April 9 at Rogers Place. As a part of the celebrations for this day, Prokop developed a working partnership with Bauer Hockey to have custom skates made with Pride colours.

“On behalf of Westland Insurance Group, I’d like to thank Luke for everything he has done to champion inclusion in hockey,” said Cari Watson, Senior Vice President, Marketing Client Experience. “Your confidence and bravery in coming out to your family, your friends, and your teammates is truly commendable. Sharing your story with so many others to inspire them to be more inclusive and to feel comfortable sharing their whole self is a powerful way to drive change in hockey, sport in general, and in our communities. Thank you for all of the work you have done, and continue to do, in driving change, and for being a role model for others.”

He has been a stalwart on the blueline through the WHL’s Eastern Conference Championship, registering 10 points (2G-8A) in 13 games for the Oil Kings.