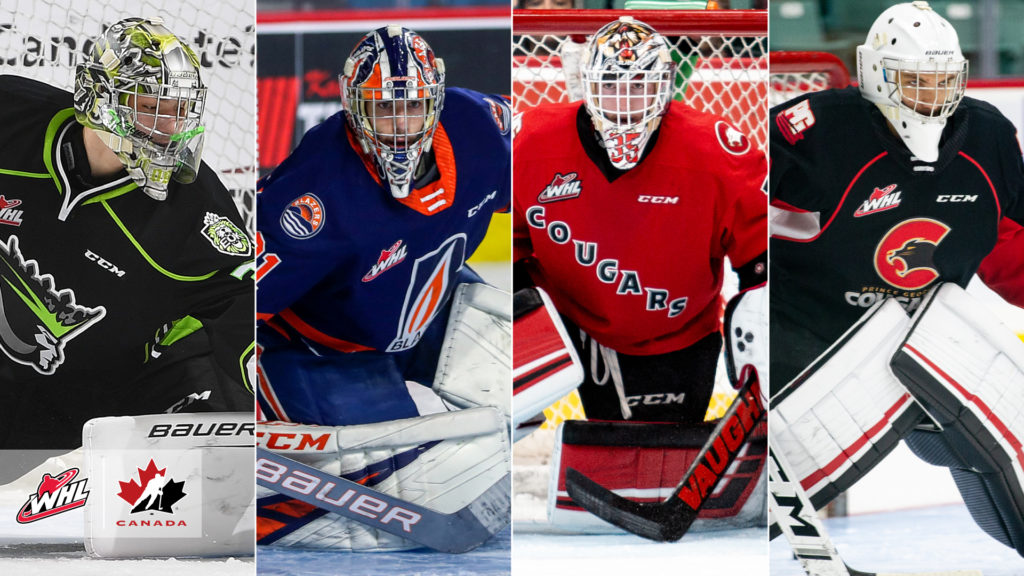 Calgary, Alta. – Nine WHL goaltenders have been invited to Hockey Canada’s virtual four-day Program of Excellence Goaltending Camp in preparation for the 2020-21 season.

The camp brings together the top goaltending talent and elite-level instructors from across the country. The camp serves as the initial evaluation stage for summer development and selection camps for Canada’s national teams. The online camp will focus on goaltending development and evaluation through online education.

Leading the way at the under-20 level are WHL goaltenders Sebastian Cossa (Fort McMurray, Alta. / Edmonton Oil Kings), Dylan Garand (Victoria, B.C. / Kamloops Blazers) and Taylor Gauthier (Calgary, Alta. / Prince George Cougars). Garand and Gauthier are on the radar of the National Hockey League’s Central Scouting service ahead of the 2020 NHL Draft later this year. In April’s final rankings, Garand was the top-ranked goaltender of the three invited, coming in at sixth among North American goaltenders. Gauthier is ranked 19th and Cossa is a top prospect eligible for the 2021 NHL Draft.

At the under-18 level, Tyler Brennan (Winnipeg, Man. / Prince George Cougars) and Thomas Milic (Coquitlam, B.C. / Seattle Thunderbirds) earned invitations. As a 16-year-old rookie for the Cougars, Brennan appeared in 15 games this season. Milic appeared in two games with the Thunderbirds, earning a 1-1-0-0 record.

Invited to participate in the camp at the under-17 level were a trio of WHL goaltenders in Ethan Buenaventura (Winnipeg, Man. / Calgary Hitmen), Reid Dyck (Winkler, Man. / Swift Current Broncos), Dylan Ernst (Weyburn, Sask. / Kamloops Blazers) and Matthew Kieper (Winnipeg, Man. / Regina Pats). Of the four young goaltenders, Kieper is the only one to have made his WHL debut this season on October 13, 2019, against the Lethbridge Hurricanes.

Also representing the WHL is Hitmen Goaltending Coach, Jason LaBarbera who will assist in the virtual program as a goaltending consultant.

For more information on Hockey Canada, the Program of Excellence and National Women’s Program, please visit HockeyCanada.ca or follow through social media on Facebook and Twitter.