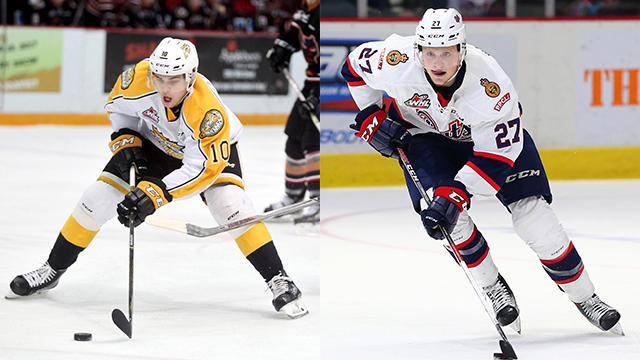 Both players were signed to three-year, entry-level contracts.

Clague, an 18-year-old product of Lloydminster, AB, was drafted by the Kings in the second round (51st) at the 2016 NHL Draft. This past year, he helped Canada to a silver-medal finish at the 2017 IIHF World Junior Championship and has recorded 38 points (5G-33A) in 46 games with the Wheat Kings. He also represented Team WHL at the 2016 CIBC Canada Russia Series.

Originally selected by the Wheat Kings with the sixth overall pick at the 2013 WHL Bantam Draft, the 6-foot, 177-pound defenceman has registered 94 points (15G-79A) in 139 career WHL regular season contests.

Wagner, a 19-year-old product of Calgary, was drafted by the Kings in the fourth round (99th) of the 2015 NHL Draft. This past year, he was invited to Canada’s National Junior Team Selection Camp, but did not represent his country at the 2017 IIHF World Junior Championship. Like Clague, he represented Team WHL at the 2016 CIBC Canada Russia Series and is enjoying a solid season with the Pats, having secured 60 points (28G-32A) in 58 games.

Clague is eligible for two more seasons in the WHL, while Wagner can return for his overage campaign in 2017-18, should the Kings elect to return him from the professional ranks.