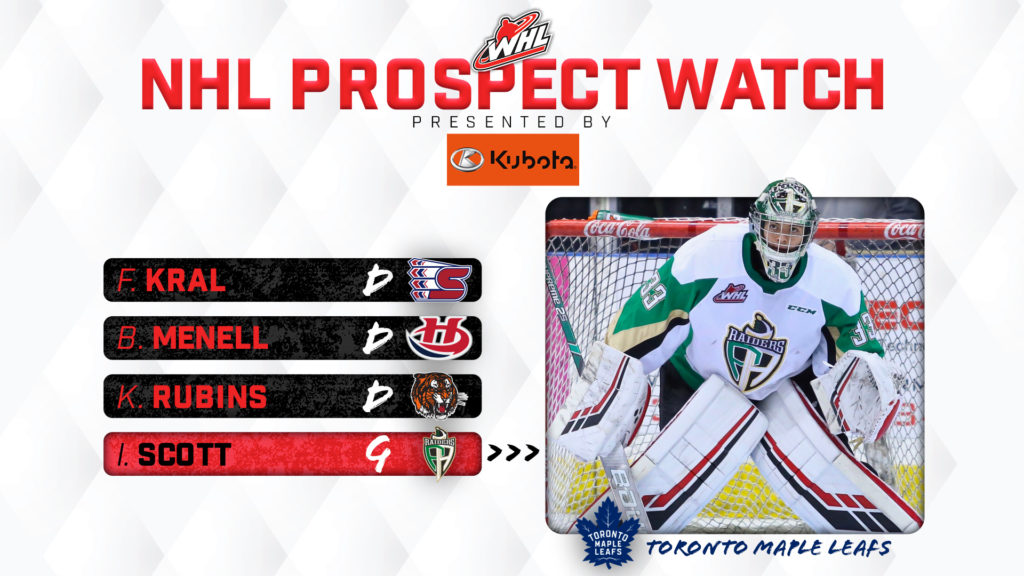 We continue our 32-part series with a look at the prospect pool of the Toronto Maple Leafs.

Filip Kral – Spokane Chiefs
Czech defenceman Filip Kral was a fifth-round selection by the Toronto Maple Leafs in the 2018 NHL Draft, following his rookie season with the Spokane Chiefs. Kral spent three seasons in Spokane, helping the Club reach the Western Conference Championship in 2019, while also serving as an alternate captain during the 2019-20 season. This past year, he spent time both with the Toronto Marlies of the AHL and HC Kometa Brno of the Czech Extraliga, the team with whom he won a championship in 2017.

Brennan Menell – Vancouver Giants / Lethbridge Hurricanes
Defenceman Brennan Menell was acquired by the Toronto Maple Leafs in July after spending the 2020-21 season in the KHL with Dynamo Minsk. The product of Woodbury, Minn. skated for three seasons in the WHL with the Vancouver Giants and Lethbridge Hurricanes, scoring 71 points from the Lethbridge blueline in his final WHL campaign while also helping the Hurricanes reach the Eastern Conference Championship. Menell made his NHL debut during the 2019-20 season, appearing in five games for the Minnesota Wild.

TRADE: We’ve acquired the rights to defenceman Brennan Menell from Minnesota in exchange for a conditional seventh-round selection in 2022. #LeafsForever

Kristians Rubins – Medicine Hat Tigers
After two full seasons in the ECHL and AHL, defenceman Kristians Rubins signed an entry-level contract with the Toronto Maple Leafs in April of 2020. The product of Riga, Latvia skated for two seasons in the WHL with the Medicine Hat Tigers, scoring seven times and totalling 27 points during the 2017-18 campaign. Last season, Rubins made 22 appearances for the Toronto Marlies of the AHL while also competing for Latvia in his hometown at the 2021 IIHF World Championship.

Ian Scott – Prince Albert Raiders
A WHL Champion in 2019, goaltender Ian Scott was selected in the fourth round of the 2017 NHL Draft by the Toronto Maple Leafs. The product of Calgary, Alta. split last season between the AHL Toronto Marlies and the Wichita Thunder of the ECHL, making six appearances in total. Scott, the ninth overall pick in the 2014 WHL Draft, spent his entire WHL career with the Prince Albert Raiders. In addition to the Ed Chynoweth Cup, Scott captured the Del Wilson Memorial Trophy as the WHL’s Top Goaltender, 2019 WHL Playoffs MVP honours, and was also named the CHL Goaltender of the Year.