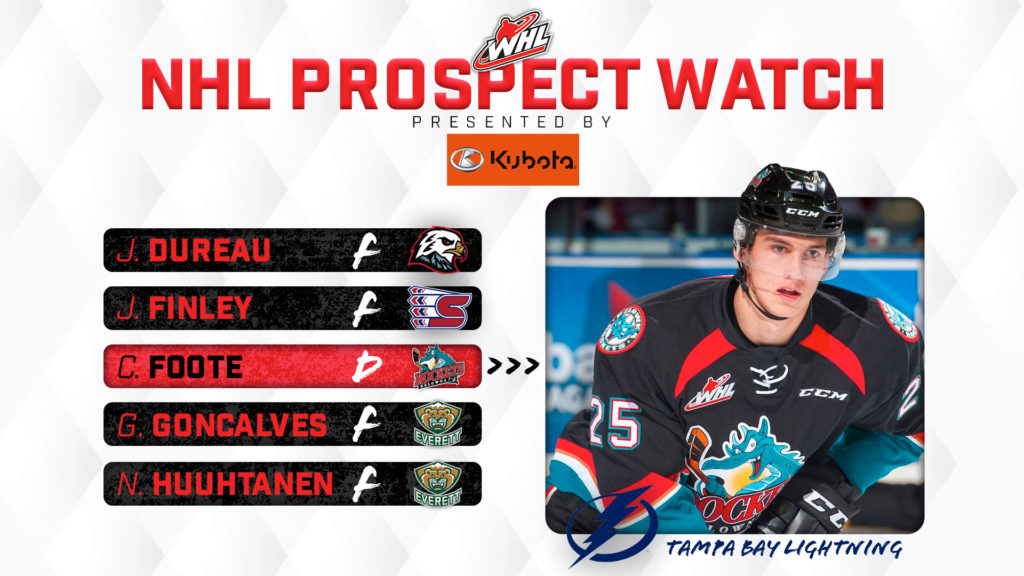 We continue our 32-part series with a look at the prospect pool of the Tampa Bay Lightning.

Jaydon Dureau – Portland Winterhawks
A fifth-round pick of the Tampa Bay Lightning in the 2020 NHL Draft, forward Jaydon Dureau heads into the 2021-22 season having led the Portland Winterhawks in scoring during the 2020-21 campaign. The product of White City, Sask. registered 31 points (10G-21A) in 24 games, marking the second consecutive season in which he averaged at least a point per game with the Winterhawks. Dureau made his professional debut last season with the Syracuse Crunch of the AHL, posting one assist in two appearances.

Jack Finley – Spokane Chiefs
Forward Jack Finley was limited to just three games during the 2020-21 season, two of which came at the AHL level with the Syracuse Crunch. The product of Kelowna, B.C. was selected in the second round of the 2020 NHL Draft by the Tampa Bay Lightning after a 19-goal, 57-point season with the Spokane Chiefs in 2019-20. Finley, the sixth overall selection in the 2017 WHL Draft, helped the Chiefs reach the Western Conference Championship in 2019.

Cal Foote – Kelowna Rockets
Defenceman Cal Foote was part of the 2021 Tampa Bay Lightning squad that captured their second consecutive Stanley Cup, appearing in 35 NHL games with the Lightning during the 2020-21 campaign. Foote, who was selected 14th overall in the 2017 NHL Draft, scored his first NHL goal January 30, 2021 against the Nashville Predators. The product of Denver, Colo. spent three seasons in the WHL with the Kelowna Rockets, captaining the Club during the 2017-18 season, a year in which he was named to the WHL Western Conference First All-Star Team after finishing the campaign with 70 points.

Gage Goncalves – Everett Silvertips
A second-round pick of the Tampa Bay Lightning in the 2020 NHL Draft, forward Gage Goncalves moves on to professional hockey this fall after winning a U.S. Division Championship with the Everett Silvertips in 2021. The product of Mission, B.C. finished tied atop the U.S. Division scoring race with 34 points (12G-22A) this past season. Goncalves debuted at the AHL level in 2020-21, making two appearances with the Syracuse Crunch, and registering one assist.

Gage Goncalves (@GageGoncalves) put him in a blender! 😱

Niko Huuhtanen – Everett Silvertips
The second overall selection in the 2021 CHL Import Draft, Finnish forward Niko Huuhtanen arrives in Everett this fall after being picked in the seventh round of the 2021 NHL Draft by the Tampa Bay Lightning. Last season, Huuhtanen put up 34 points in 37 games with Tappara in Finland’s U20 league, adding five more points in seven appearances for the Finns at the 2021 IIHF U18 World Championship in Texas.

ICYMI: The @WHLsilvertips have announced the signing of the second overall selection in the CHL #ImportDraft, forward Niko Huuhtanen.