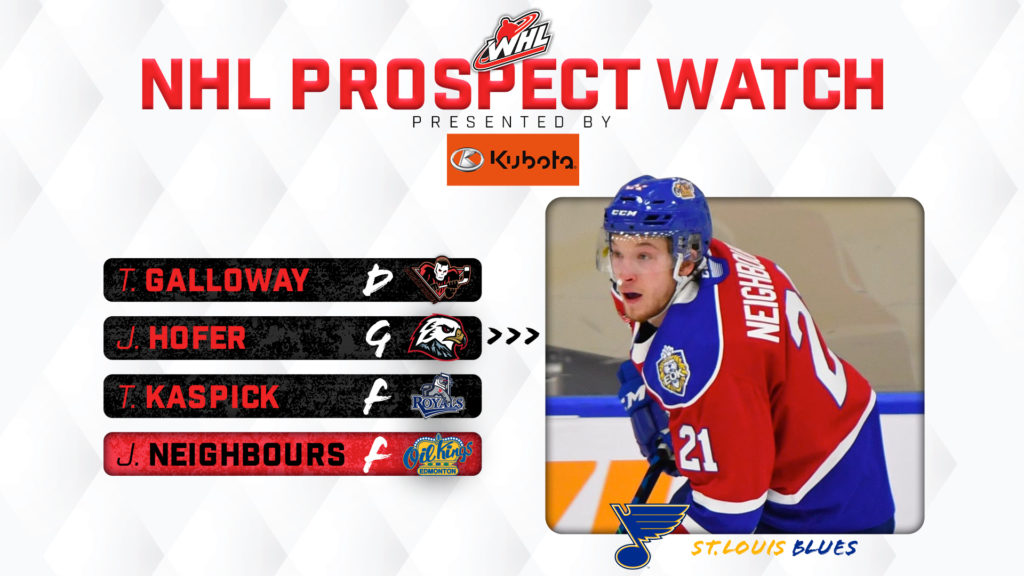 We continue our 32-part series with a look at the prospect pool of the St. Louis Blues.

Tyson Galloway – Calgary Hitmen
Defenceman Tyson Galloway scored four times in 17 appearances with the Calgary Hitmen during the 2020-21 season, parlaying a strong WHL campaign into being selected in the fifth round of the 2021 NHL Draft by the St. Louis Blues. The product of Kamloops, B.C. finished second among Hitmen blueliners with nine points. Originally selected by Calgary in the second round of the 2018 WHL Draft, Galloway has compiled 10 points (4G-6A) in 53 appearances with the Hitmen.

Adding a defenseman to the mix with our fifth-round pick. Welcome, Tyson Galloway! #stlblues pic.twitter.com/WVDG8eMM9p

Joel Hofer – Swift Current Broncos / Portland Winterhawks
A WHL Champion and World Junior gold medalist, Joel Hofer embarks on his second season of professional hockey having spent the 2020-21 campaign with the Utica Comets of the AHL. The product of Winnipeg, Man. won the Ed Chynoweth Cup with the Swift Current Broncos in 2018 and was selected in the fourth round of the 2018 NHL Draft by the St. Louis Blues. Hofer finished his WHL career with the Portland Winterhawks, posting a 2.49 goals-against average and 0.915 save percentage over 48 appearances with the Winterhawks during the 2019-20 season. He was also part of the Canadian contingent that captured the gold medal at the 2020 IIHF World Junior Championship. Hofer was named the tournament’s Top Goaltender.

Shout out to the @VictoriaRoyals and their tremendous fans for sharing some big time love for Joel Hofer last night in his first game back from World Juniors!

Tanner Kaspick – Brandon Wheat Kings / Victoria Royals
Forward Tanner Kaspick was selected in the fourth round of the 2016 NHL Draft by the St. Louis Blues. The product of Brandon, Man. spent the majority of his WHL career with his hometown Wheat Kings, helping Brandon win an Eastern Conference Championship in 2015 and a WHL Championship in 2016, the season he was named WHL Scholastic Player of the Year. Kaspick started the 2017-18 campaign as Wheat Kings captain, but was dealt to the Victoria Royals in a blockbuster deal. He scored 27 points in 25 games with Victoria before making his professional debut with the Manitoba Moose during the 2018 AHL playoffs. Last season, Kaspick made 20 appearances with Utica of the AHL.

Jake Neighbours – Edmonton Oil Kings
A first-round selection by the St. Louis Blues in the 2021 NHL Draft, forward Jake Neighbours has captured a Central Division title in each of his three full WHL seasons with the Edmonton Oil Kings. The product of Airdrie, Alta. collected 70 points (23G-47A) during the 2019-20 season, then posted a league-leading +29 rating during the 2020-21 campaign. Neighbours was originally selected fourth overall by Edmonton in the 2017 WHL Draft.