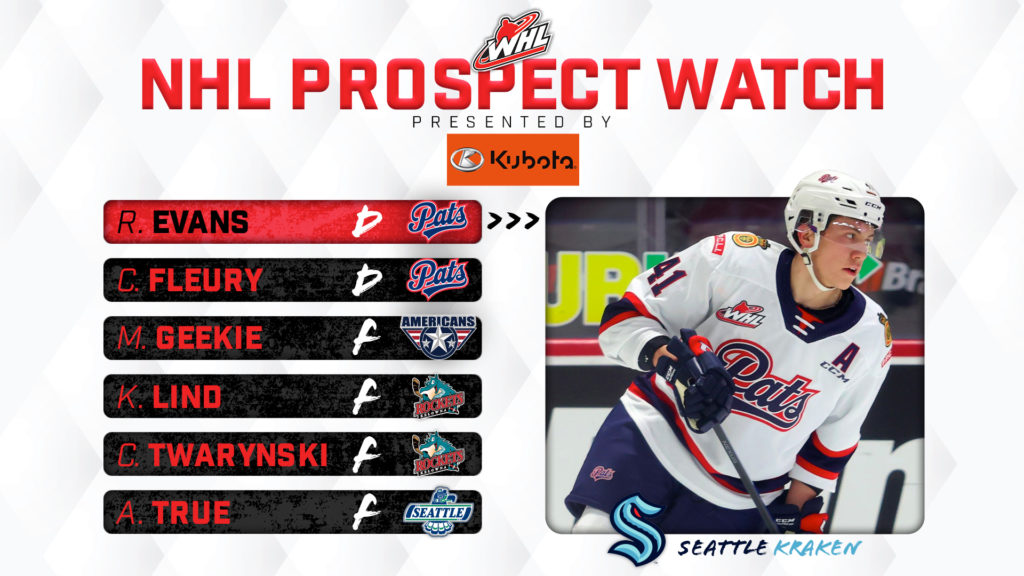 We continue our 32-part series with a look at the prospect pool of the Seattle Kraken.

Ryker Evans – Regina Pats
Defenceman Ryker Evans became the first WHL player selected by the Seattle Kraken in the NHL Draft when he was taken in the second round this past July. The product of Calgary, Alta. set a new career best with 25 assists during the 2020-21 WHL season, eclipsing his previous personal mark of 24 in 39 fewer games. Evans has made 132 regular season appearances in the WHL, all with the Regina Pats, who selected him in the tenth round of the 2016 WHL Draft.

🎥 Ryker Evans of the @WHLPats was selected in the second round, 35th overall by the @SeattleKraken in the 2021 #NHLDraft.

We chatted about the Draft, the Kraken and more in our continuing 1-On-1 series!#MeetTheFuture | @KubotaCanadaLtd pic.twitter.com/zauff16QnC

Cale Fleury – Kootenay ICE / Regina Pats
Defenceman Cale Fleury was selected by the Seattle Kraken in the 2021 NHL Expansion Draft, joining older brother Haydn in the Pacific Northwest. Fleury, who plied his trade in the WHL with Kootenay and Regina, appeared in 22 games with Laval of the AHL during the 2020-21 season. He played in 41 NHL games with Montreal during the 2019-20 campaign: the Canadiens originally selected Fleury in the third round of the 2017 NHL Draft. Fleury served as captain with the ICE during the 2016-17 and 2017-18 seasons before skating with the Pats in the 2018 Memorial Cup.

Morgan Geekie – Tri-City Americans
Morgan Geekie was selected in the NHL Expansion Draft by the Seattle Kraken this past summer on the heels of appearing in 36 games for the Carolina Hurricanes during the 2020-21 NHL season. In 38 NHL regular season contests, the product of Strathclair, Man. has found the back of the net six times. He won a Calder Cup in his first professional season with the Charlotte Checkers of the AHL. Geekie spent his entire WHL career with the Tri-City Americans, posting a 90-point season in 2016-17 and an 84-point campaign in 2017-18.

Kole Lind – Kelowna Rockets
Kole Lind made his NHL debut with the Vancouver Canucks in April of 2021, appearing in seven contests over the course of the 2020-21 NHL season. Lind was selected by the Seattle Kraken in the 2021 NHL Expansion Draft, and arrives in the Emerald City having spent the past three seasons playing professionally in the Canucks organization. Lind was originally selected by Vancouver in the second round of the 2017 NHL Draft. He won a WHL Championship with the Kelowna Rockets in 2015, and over the course of three full seasons in Kelowna put up more than 245 regular season and playoff points.

Alexander True – Seattle Thunderbirds
Alexander True wrote himself into Seattle hockey lore by scoring the goal that clinched the 2017 WHL Championship for the Seattle Thunderbirds. The Danish forward returns to the Pacific Northwest after spending the past four seasons in the San Jose Sharks organization. True appeared in 19 NHL games with San Jose over the past two seasons, recording five assists. He served as an alternate captain with the San Jose Barracuda of the AHL in 2020-21, finishing the season with 20 points (9G-11A) from 27 games played.

Hey @SeattleKraken fans, you *might* remember that Alexander True has already brought a hockey championship to the Emerald City!#WHLAlumni | @SeattleTbirds pic.twitter.com/4EgA5DjlCD

Carsen Twarynski – Calgary Hitmen / Kelowna Rockets
He made 22 appearances with the Philadelphia Flyers over the past two NHL seasons, and forward Carsen Twarynski heads to the expansion Seattle Kraken looking to build on that number. The product of Calgary, Alta. was originally selected in the third round of the 2016 NHL Draft by the Flyers, and over the past four seasons has appeared in more than 100 AHL games with the Lehigh Valley Phantoms. Twarynski began his WHL career with his hometown Calgary Hitmen during the 2014-15 season, but spent the last year and a half of his junior career with the Kelowna Rockets, for whom he recorded 45 goals and 72 points during the 2017-18 campaign.