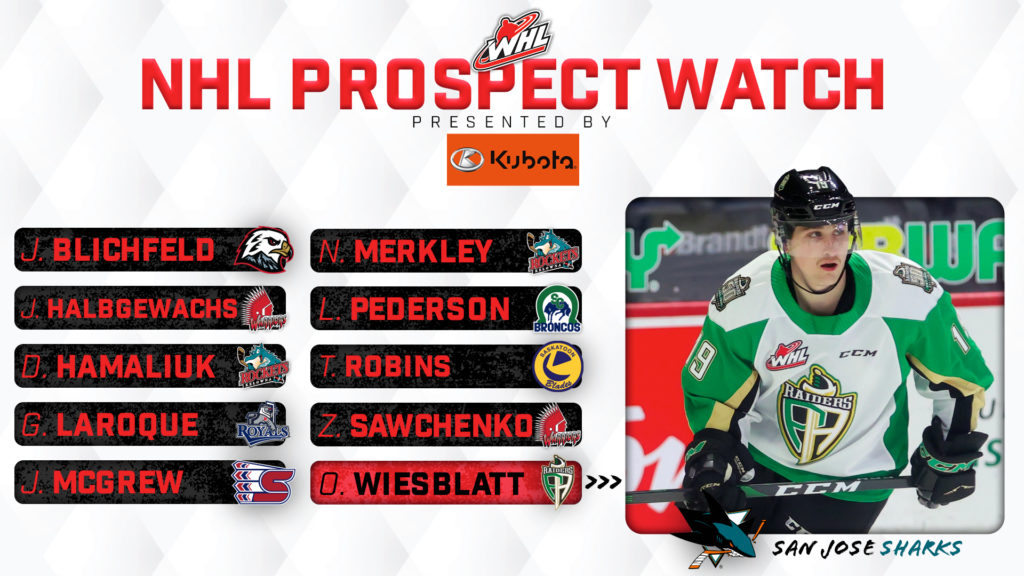 We continue our 32-part series with a look at the prospect pool of the San Jose Sharks.

Joachim Blichfeld – Portland Winterhawks
Danish forward Joachim Blichfeld led the WHL in scoring with 114 points during the 2018-19 season, more than doubling his previous season’s point total with the Portland Winterhawks and earning WHL Player of the Year honours. Blichfeld, a seventh-round pick of the San Jose Sharks in the 2016 NHL Draft, made his NHL debut in December of 2019, then scored his first NHL goal in April of 2021 against the Minnesota Wild. In parts of two seasons with the AHL’s San Jose Barracuda, Blichfeld has amassed 54 points (28G-26A) in 69 appearances.

Jayden Halbgewachs – Moose Jaw Warriors
Jayden Halbgewachs was a goal-scoring dynamo with the Moose Jaw Warriors, finding the back of the net 153 times over 307 regular season and playoff games. Halbgewachs, who hails from Emerald Park, Sask., put up 70 goals during the 2017-18 season, a year in which he led the entire CHL in scoring with 129 points. He was originally signed by the San Jose Sharks in December of 2017, spending the past three seasons with the San Jose Barracuda of the AHL. In 25 appearances last season, Halbgewachs collected six goals and 11 points.

Congrats! 👏 In addition, Halbgewachs won the Bob Clarke Trophy as the WHL top scorer and was named to the Eastern Conference First All-Star Team! https://t.co/A9Tx0GQKJd

With the 55th overall pick of the #NHLDraft, the Sharks select Dillon Hamaliuk. #SharksDraft pic.twitter.com/LR5nYjWRiB

Gannon Laroque – Victoria Royals
Defenceman Gannon Laroque was signed to a WHL Standard Player Agreement by the Victoria Royals in August of 2019. The product of Edmonton, Alta. caught on with the Royals for the 2020-21 WHL season, and after posting seven points in 21 games, he was selected in the fourth round of the 2021 NHL Draft by the San Jose Sharks.

Jake McGrew – Spokane Chiefs
Forward Jake McGrew was a sixth-round pick by the San Jose Sharks in the 2017 NHL Draft following a season in which he did not make an appearance with the Spokane Chiefs due to injury. The product of Orange, Calif. made up for lost time in the years following, however, scoring 50 times for Spokane over the 2017-18 and 2018-19 seasons, helping the Chiefs reach the Western Conference Championship in 2019. Last season, McGrew made 27 appearances with the San Jose Barracuda of the AHL, posting seven points. He added six goals and eight points from 11 games played with the Allen Americans of the ECHL.

How do ya do Jake McGrew!

Nick Merkley – Kelowna Rockets
Nick Merkley enjoyed his most fruitful NHL season this past year, totalling 10 points (2G-8A) in 27 games with the New Jersey Devils. A former first-round pick by the Arizona Coyotes, Merkley was shipped by New Jersey to the San Jose Sharks in July. The product of Calgary, Alta. spent four full seasons in the WHL with the Kelowna Rockets: in 2014-15 the forward hit the 90-point mark, as Kelowna captured the Ed Chynoweth Cup as Merkley led all WHL playoff performers with 22 assists. He also represented the Tucson Roadrunners in the 2018 AHL All-Star Game.

TRADE: We've acquired the rights to forward Nick Merkley from the @NJDevils in exchange for the rights to defenseman Christian Jaros. #SJSharks https://t.co/uUqIxHJi9I

Lane Pederson – Seattle Thunderbirds / Red Deer Rebels / Swift Current Broncos
Lane Pederson’s offensive numbers grew steadily over each of his three seasons in the WHL, beginning with an eight-goal, 20-point campaign with the Seattle Thunderbirds and ending with a 65-point effort in 2016-17 with the Swift Current Broncos. Pederson, who hails from Saskatoon, Sask., was originally signed by the Arizona Coyotes in October of 2016, making his professional debut at AHL Tucson during the 2017-18 campaign. This past season, Pederson took part in 15 NHL games with Arizona, scoring his first career NHL goal on his debut April 2 at Anaheim. San Jose acquired him via trade in July.

Tristen Robins – Regina Pats / Saskatoon Blades
Saskatoon Blades forward Tristen Robins was selected in the second round of the 2020 NHL Draft by the San Jose Sharks. The product of Clear Lake, Man. made his AHL debut with the San Jose Barracuda this past February before proceeding to appear in 16 games with the Blades during the 2020-21 WHL season. Robins has played all but one of his WHL games for Saskatoon; he made his debut with the Regina Pats during the 2017-18 season after being selected by Regina in the fourth round of the 2016 WHL Draft.

The jacket was his dad's, who was in the #SJSharks org in the '90s. pic.twitter.com/ONOgWsGvFX

Zach Sawchenko – Moose Jaw Warriors
Goaltender Zach Sawchenko is readying himself for his third season of professional hockey after splitting the 2020-21 campaign between San Jose of the AHL and Allen of the ECHL. The product of Calgary, Alta. won 96 regular season and playoff games as a Moose Jaw Warrior between 2013 and 2017 and was twice named to the WHL Eastern Conference First All-Star Team (2016, 2017). Following his time in the WHL, Sawchenko suited up for two seasons with the University of Alberta Golden Bears, winning a U SPORTS University Cup in 2018. After signing an AHL deal with the San Jose Barracuda in 2019, Sawchenko was signed to an NHL entry-level deal by the Sharks in April of 2021.

Two straight wins, a .951 SV%, and a season-high 37 saves for the @sjbarracuda gives Zachary Sawchenko (@Chunko_31) #SJSharks prospect of the week honors! https://t.co/AEzqcVkYVh

Ozzy Wiesblatt – Prince Albert Raiders
A first-round pick by the San Jose Sharks in the 2020 NHL Draft, forward Ozzy Wiesblatt has played at a point-per-game pace or better in each of his last two seasons with the Prince Albert Raiders. The product of Calgary, Alta. led Prince Albert in scoring during the 2020-21 campaign with 28 points (7G-21A), while also scoring twice in six appearances at the AHL level with the San Jose Barracuda. Wiesblatt and the Raiders captured the WHL Championship in his first full season with the team; he posted 10 points in 23 post-season games during Prince Albert’s run in 2019.

Amazing moment for @ozzywiesblatt and his family to close out the first round of the #NHLDraft. ♥️ pic.twitter.com/tsY6uiTmVl