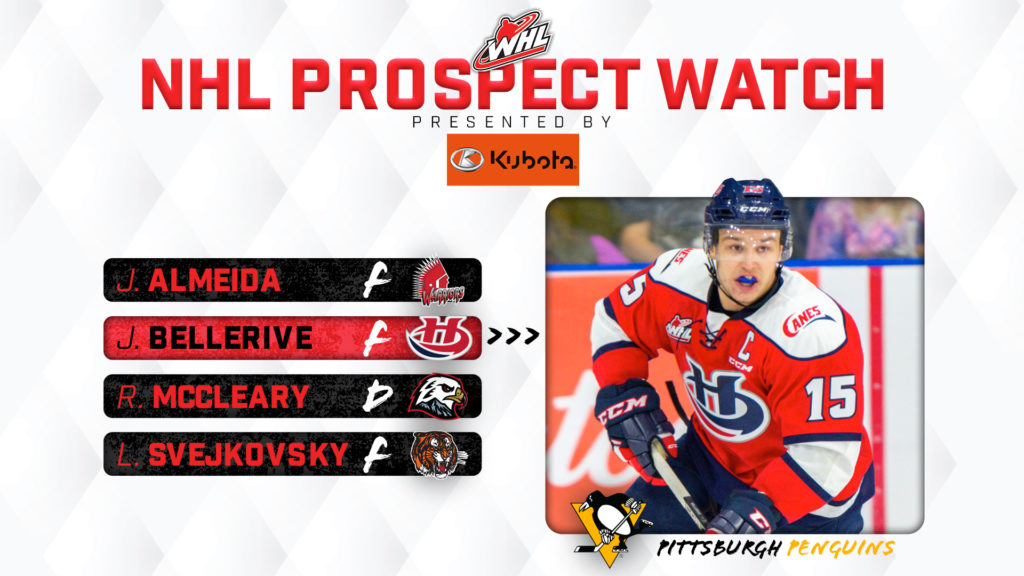 We continue our 32-part series with a look at the prospect pool of the Pittsburgh Penguins.

Justin Almeida – Prince George Cougars / Moose Jaw Warriors
Forward Justin Almeida prepares for his third season of professional hockey having appeared in 11 games last year with Wilkes-Barre / Scranton of the AHL. The product of Kitimat, B.C. was a fifth-round selection of the Pittsburgh Penguins in the 2018 NHL Draft. He followed that honour up by recording 111 points during the 2018-19 season with the Moose Jaw Warriors, while also winning the Brad Hornung Trophy as WHL Most Sportsmanlike Player and the CHL Sportsman of the Year award. In four full WHL seasons with Prince George and Moose Jaw, Almeida registered 243 regular season points.

Jordy Bellerive – Lethbridge Hurricanes
Jordy Bellerive spent two seasons as captain of the Lethbridge Hurricanes, hitting a high-water mark of 46 goals and 92 points during the 2017-18 WHL season. The product of North Vancouver, B.C. was originally signed by the Pittsburgh Penguins in September of 2017. Last season, Bellerive scored 10 times, adding eight assists over 29 appearances with Wilkes-Barre / Scranton of the AHL, upping his total number of AHL games played to 85.

Jordy Bellerive called game for the @WBSPenguins on Tuesday. 🚨 pic.twitter.com/fPu5zrpa9p

Ryan McCleary – Portland Winterhawks
Defenceman Ryan McCleary was selected in the seventh round of the 2021 NHL Draft by the Pittsburgh Penguins after posting two goals and seven points in his first 18 games with the Portland Winterhawks last season. McCleary finished second among Winterhawks skaters during the 2020-21 WHL season with a +11 rating. The product of Swift Current, Sask. was originally selected by Portland in the fifth round of the 2018 WHL Draft.

With the 194th pick in the 2021 #NHLDraft, the Penguins select defenseman Ryan McCleary. pic.twitter.com/oorI9Cvj7t

Lukas Svejkovsky – Vancouver Giants / Medicine Hat Tigers
Forward Lukas Svejkovsky was a fourth-round selection by the Pittsburgh Penguins in the 2020 NHL Draft after posting 38 points during the 2019-20 WHL season with Vancouver and Medicine Hat. The product of Point Roberts, Wash. was an alternate captain with the Tigers this past season. He finished the campaign with 22 points (10G-12A) from 20 games played. Svejkovsky was part of the Giants squad that won the 2019 Western Conference Championship, he recorded 13 points in 22 post-season appearances that spring.