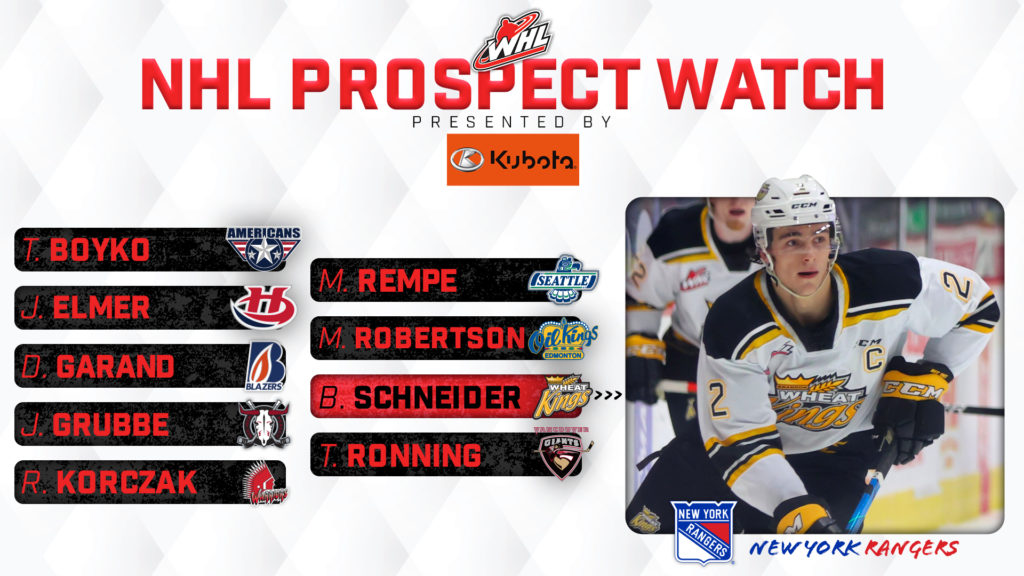 We continue our 32-part series with a look at the prospect pool of the New York Rangers.

Talyn Boyko – Tri-City Americans
Goaltender Talyn Boyko was selected in the fourth round of the 2021 NHL Draft by the New York Rangers after posting a 7-7-0-0 record, 3.02 goals-against average and 0.901 save percentage with the Tri-City Americans during the 2020-21 WHL season. The product of Drumheller, Alta. recorded his first career WHL shutout March 27, 2021, stopping all 26 shots he faced in a win over the Spokane Chiefs. Boyko has appeared in 49 regular season and playoff games with the Americans since breaking into the WHL in the 2018-19 season.

Jake Elmer – Regina Pats / Kootenay ICE / Lethbridge Hurricanes
Jake Elmer prepares for his third season of professional hockey having made 35 appearances with Jacksonville of the ECHL during the 2020-21 season. Elmer, a product of Calgary, Alta., signed an entry-level contract with the Rangers in March of 2019 following a 39-goal, 81-point season with the Lethbridge Hurricanes. Over parts of five WHL seasons with Regina, Kootenay and Lethbridge, Elmer tallied 64 goals and 134 regular season points. He represented the Maine Mariners in the 2020 ECHL All-Star Game.

Elmer, 20, has skated in 66 games with @WHLHurricanes of the @TheWHL this season, registering 38 goals and 40 assists, along with a +24 rating and 41 penalty minutes. pic.twitter.com/wWGkFBA36q

Dylan Garand – Kamloops Blazers
Dylan Garand has grown into one of the elite goaltenders in the WHL over the past two seasons, posting a combined 43-13-2-1 record and seven shutouts during the 2019-20 and 2020-21 campaigns with the Kamloops Blazers. Garand, who hails from Victoria, B.C., was selected by the New York Rangers in the fourth round of the 2020 NHL Draft, and made his professional debut with Hartford of the AHL in February of 2021. Garand was also part of the Canadian team that captured a silver medal at the 2021 IIHF World Junior Championship. He was awarded the Daryl K. (Doc) Seaman Memorial Trophy as WHL Scholastic Player of the Year in 2020.

Jayden Grubbe – Red Deer Rebels
Red Deer Rebels captain Jayden Grubbe was selected in the third round of the 2021 NHL Draft by the New York Rangers. Grubbe, the seventh overall selection in the 2018 WHL Draft, was named Rebels captain prior to the start of the 2020-21 WHL season. Over two seasons in Red Deer, the product of Calgary, Alta. has appeared in 62 regular season games, totalling 32 points (7G-25A).

Ryder Korczak – Calgary Hitmen / Moose Jaw Warriors
Ryder Korczak joined older brother Kaedan (Vegas Golden Knights) as an NHL-drafted prospect when he was selected in the third round of the 2021 NHL Draft by the New York Rangers. The product of Yorkton, Sask. has participated in three full WHL seasons with the Calgary Hitmen and Moose Jaw Warriors, leading Moose Jaw in scoring by a 24-point margin during the 2019-20 campaign with 67 points. Korczak was originally selected by Calgary in the second round of the 2017 WHL Draft. He has served as an alternate captain with the Warriors in each of the last two seasons.

🎥 Ryder Korczak of the @MJWARRIORS was selected in the third round, 75th overall by the @NYRangers in the 2021 #NHLDraft.

Matthew Rempe – Seattle Thunderbirds
6-foot-8 forward Matthew Rempe was selected in the sixth round of the 2020 NHL Draft by the New York Rangers after recording 31 points in 47 games with the Seattle Thunderbirds in his first WHL season. Rempe, who hails from Calgary, Alta., appeared in only eight contests for Seattle during the 2020-21 campaign, totalling five points (1G-4A) in the process. Rempe was listed by the Thunderbirds in May of 2017, signing a WHL Standard Player Agreement in August of 2018.

Matthew Robertson – Edmonton Oil Kings
Matthew Robertson has been a steady presence during the Edmonton Oil Kings’ three consecutive Central Division championships, serving as an alternate captain with his hometown WHL Club through each of the past three seasons. Robertson was selected in the second round of the 2019 NHL Draft by the New York Rangers, and is primed to make his professional hockey debut this fall. This past season, Robertson tallied 22 points in as many games with the Oil Kings, finishing the campaign with a +26 rating and a nod as the Central Division Defenceman of the Year.

"There's a bunch of great defensemen – great players – in this camp, and the compete level showcases that."

Ty Ronning – Vancouver Giants
Forward Ty Ronning recorded 18 points in 18 games with the AHL’s Hartford Wolf Pack during the 2020-21, and prepares for his fourth season of professional hockey having agreed to terms on a one-year contract extension this past August. Ronning, a product of Burnaby, B.C., capped off his WHL career by shattering the Vancouver Giants single-season goals record with a 61-goal campaign during the 2017-18 season. He was named to the WHL Western Conference Second All-Star team that season, and also was awarded the Doug Wickenheiser Memorial Trophy as WHL Humanitarian of the Year. Ronning was originally selected by the Rangers in the seventh round of the 2016 NHL Draft.

It’s Thursday, so we’re throwing it back to March 16, 2018 where Ty Ronning potted his team-record 61st goal of the season!
•
•
📸: Chris Relke pic.twitter.com/eMqYPpjBwQ

Braden Schneider – Brandon Wheat Kings
The reigning WHL Top Defenceman, Braden Schneider is readying himself for pro hockey following 207 regular season appearances with the Brandon Wheat Kings. The product of Prince Albert, Sask., a first-round selection of the New York Rangers in the 2020 NHL Draft, capped off the 2020-21 WHL season with the Bill Hunter Memorial Trophy and an East Division championship. Schneider enjoyed success on the international stage too this past season, winning a silver medal at the 2021 IIHF World Junior Championship in Edmonton, then helping Canada capture the gold medal at the 2021 IIHF World Championship in Riga, Latvia.