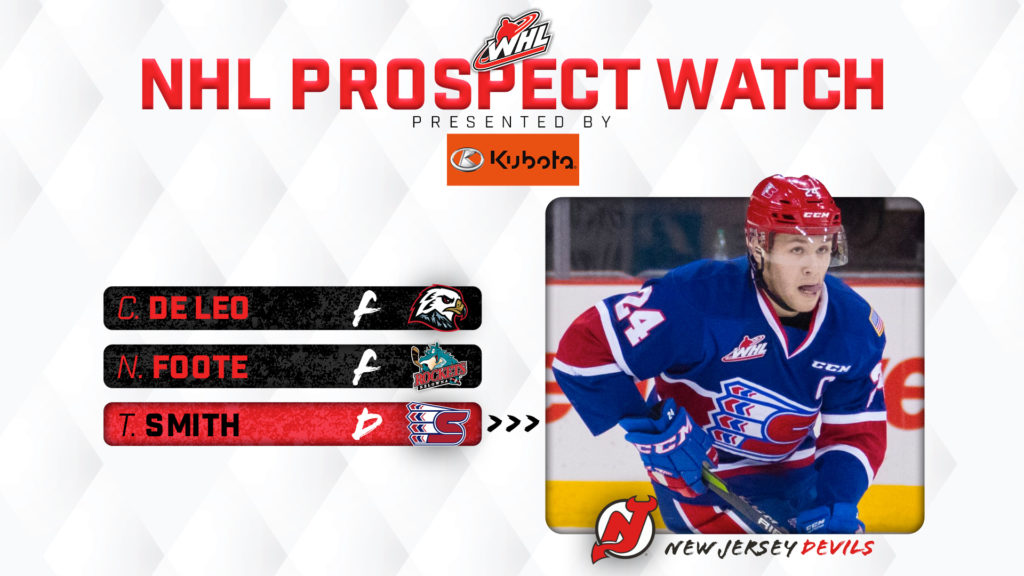 We continue our 32-part series with a look at the prospect pool of the New Jersey Devils.

Chase De Leo – Portland Winterhawks
A WHL Champion with the Portland Winterhawks in 2013, Chase De Leo joins the New Jersey Devils organization after spending the past three seasons in the Anaheim Ducks organization. De Leo, who hails from La Mirada, Calif., made his NHL debut against the Ducks in March of 2016 as a member of the Winnipeg Jets. In all, De Leo has appeared in five NHL contests including one with Anaheim last season. The 25-year-old recorded 307 regular season and playoff points over four seasons with the Winterhawks. He finished second in team scoring with San Diego of the AHL during the 2020-21 season with 35 points from 37 games played.

La Mirada (Calif.) native Chase De Leo (@Dels9) is in the lineup tonight for his fifth career NHL game, third as a Duck and his first at @HondaCenter. pic.twitter.com/1Bo8dCupaL

Nolan Foote – Kelowna Rockets
Former Kelowna Rockets captain Nolan Foote made his NHL debut with the New Jersey Devils April 18, 2021, registering an assist against the New York Rangers. Two nights later in Pittsburgh, Foote scored his first NHL goal, finishing the 2020-21 season with two points from six NHL appearances. The Devils acquired Foote via trade in February of 2020; the product of Denver, Colo. was originally selected in the first round of the 2019 NHL Draft by the Tampa Bay Lightning. As a Rocket, Foote enjoyed a high-water mark of 36 goals and 63 points during the 2018-19 WHL season. He also helped Canada to a gold medal at the 2020 IIHF World Junior Championship.

Ty Smith – Spokane Chiefs
He was named to the NHL’s All-Rookie Team in 2021, and defenceman Ty Smith is poised for a big sophomore season with the New Jersey Devils after recording 23 points (2G-21A) in 48 games during the 2020-21 campaign. The former Spokane Chiefs captain was a first-round selection by New Jersey in the 2018 NHL Draft. The product of Lloydminster, Alta. produced offence at a steady rate in Spokane, registering 59 or more points in three of his four full seasons with the Chiefs. Smith compiled plenty of hardware during his time in Spokane: two Bill Hunter Memorial Trophies as the WHL’s Top Defenceman, a CHL Defenceman of the Year award and the Daryl K. (Doc) Seaman Memorial Trophy as the WHL’s Scholastic Player of the Year all sit in his personal cabinet.