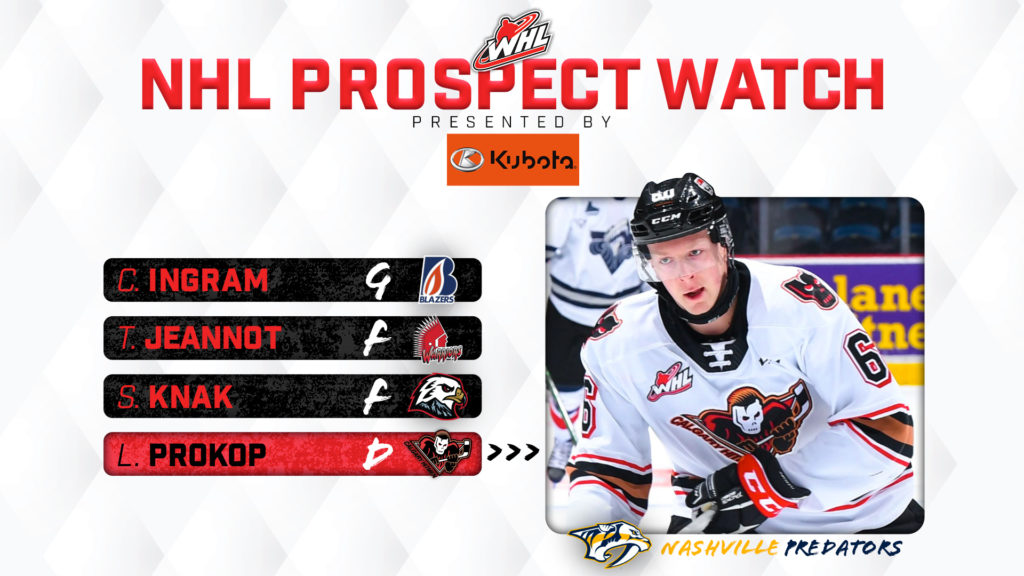 We continue our 32-part series with a look at the prospect pool of the Nashville Predators.

Connor Ingram – Kamloops Blazers
Goaltender Connor Ingram was acquired by the Nashville Predators in June of 2019, after originally being selected by the Tampa Bay Lightning in the third round of the 2016 NHL Draft. The product of Imperial, Sask. was named to the WHL Western Conference Second All-Star Team twice as a member of the Kamloops Blazers, posting a career-best 34 wins during the 2015-16 season. He has continued to put up numbers at the AHL level, leading the league in shutouts with six during the 2018-19 season, and twice being named to the AHL All-Star Game, in 2019 with the Syracuse Crunch and in 2020 with the Milwaukee Admirals. Ingram started this past season in Sweden before making five AHL appearances with the Chicago Wolves in April and May.

Tanner Jeannot – Moose Jaw Warriors
Forward Tanner Jeannot sprung into action with the Nashville Predators during the 2020-21 NHL season. The product of Estevan, Sask. made his NHL debut versus Carolina March 2, then in his third career NHL contest April 13 scored his first career NHL goal against Tampa Bay. Jeannot, who spent four seasons with the Moose Jaw Warriors from 2014-18, also appeared in five post-season contests last spring. Jeannot was signed by Nashville in April of 2018 and spent two full seasons with the Milwaukee Admirals of the AHL from 2018-20. This past season, he was an alternate captain with the AHL’s Chicago Wolves before being recalled by the Predators.

Simon Knak – Portland Winterhawks
Swiss forward Simon Knak was selected in the sixth round of the 2021 NHL Draft by the Nashville Predators on the heels of two strong seasons with the Portland Winterhawks. This past season, Knak scored 16 times in 24 games, and represented Switzerland at the IIHF World Junior Championship for the second time in his career. This season, Knak is playing with HC Davos of Switzerland’s National League.

Simon Knak's slick redirect gives Switzerland a 4-2 with under 10 minutes to play. pic.twitter.com/RbkNQczckh

Luke Prokop – Calgary Hitmen
Calgary Hitmen defenceman Luke Prokop was a third-round selection of the Nashville Predators in the 2020 NHL Draft. The product of Edmonton, Alta. signed a three-year, entry-level contract with Nashville in December of last year. This past season, Prokop registered six points (2G-4A) in 15 games with the Hitmen, and over the course of 150 regular season appearances with Calgary, he has logged 41 points. Prokop was the seventh overall selection in the 2017 WHL Draft.

🎥 Luke Prokop discusses his first experience at Predators Development Camp and the support he's received from his teammates. pic.twitter.com/59UINaZN77