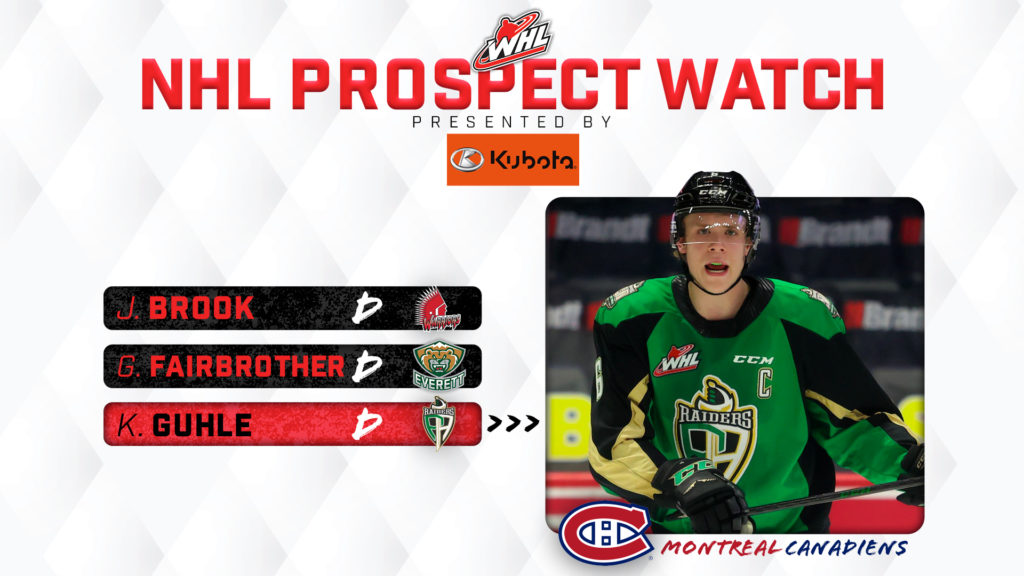 We continue our 32-part series with a look at the prospect pool of the Montreal Canadiens.

Josh Brook – Moose Jaw Warriors
A second-round selection by Montreal in the 2017 NHL Draft, Josh Brook was one of four WHL blueliners drafted in 2017 by the Canadiens. The former Moose Jaw Warriors defenceman, and product of Roblin, Man. has spent the past two seasons with the Laval Rocket of the AHL, setting a new professional best during the 2020-21 campaign with 15 points from 33 games played. Brook led all WHL defencemen in scoring with 75 points during the 2018-19 season. For his efforts, he was named the 2019 WHL Eastern Conference Defenceman of the Year.

#WorldJuniors season is coming up. Find out what role the tournament played in Josh Brook's development.#GoHabsGo @coldfx pic.twitter.com/LRf0IJWT4S

Gianni Fairbrother – Everett Silvertips
Defenceman Gianni Fairbrother graduated from the Everett Silvertips program following the 2020-21 WHL season, captaining the Silvertips to the U.S. Division title and sharing the lead among Everett rearguards in points with 17. The product of North Vancouver, B.C. was a third-round selection by Montreal in the 2019 NHL Draft. He appeared in three games with Laval of the AHL during the 2020-21 season to mark his professional hockey debut.

Kaiden Guhle – Prince Albert Raiders
The first overall selection in the 2017 WHL Draft, Kaiden Guhle has developed into a leader in the Prince Albert Raiders dressing room. The product of Sherwood Park, Alta. was named Raiders captain prior to the start of the 2020-21 season. He was the 16th overall pick by the Montreal Canadiens in the 2020 NHL Draft, appearing in three games at AHL Laval during the 2020-21 campaign. Guhle’s first full season in the WHL (2018-19) was a memorable one, his Prince Albert team captured the Ed Chynoweth Cup for the first time in 34 years. He scored twice, and added an assist for Canada at the 2021 IIHF World Junior Championship, winning a silver medal in the process.

Now that he's officially part of the Canadiens family, get to know our new prospect, Kaiden Guhle.#GoHabsGo pic.twitter.com/GXiydNcpFg