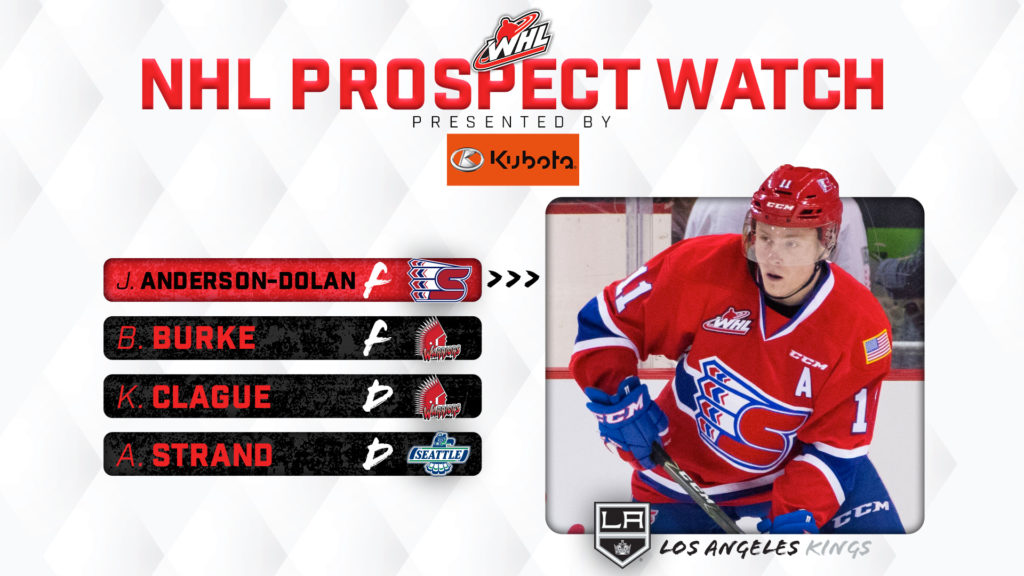 We continue our 32-part series with a look at the prospect pool of the Los Angeles Kings.

Jaret Anderson-Dolan – Spokane Chiefs
Forward Jaret Anderson-Dolan made 34 appearances with the Los Angeles Kings during the 2020-21 season, scoring seven times and totalling 11 points. The product of Calgary, Alta., and former Spokane Chiefs captain was a second-round selection by Los Angeles in the 2017 NHL Draft. Anderson-Dolan scored 40 goals for the Chiefs during the 2017-18 season and was named to the WHL Western Conference First All-Star Team. In his final WHL campaign, he captained Spokane to an appearance in the 2019 Western Conference Championship.

Brayden Burke – Red Deer Rebels / Lethbridge Hurricanes / Moose Jaw Warriors
Brayden Burke skated for three WHL Clubs over the course of four full seasons, twice breaking the 100-point barrier. The product of Edmonton, Alta. posted a league-leading 82 assists with the Lethbridge Hurricanes in 2015-16, then matched that total two years later as part of a career-best 113-point campaign with the Moose Jaw Warriors. Burke signed an entry-level contract with the Arizona Coyotes in 2018 and spent the past three seasons with the Tucson Roadrunners of the AHL. He recorded 52 points (21G-31A) during the 2019-20 season at Tucson. The Los Angeles Kings acquired his services via trade in July of 2021.

Kale Clague – Brandon Wheat Kings / Moose Jaw Warriors
Defenceman Kale Clague played in 18 NHL games with Los Angeles during the 2020-21 season. The product of Regina, Sask. put up six assists with the Kings, and served as an alternate captain with Ontario of the AHL. Clague was a member of the Brandon Wheat Kings team that won the Ed Chynoweth Cup in 2016: he was selected in the second round of the NHL Draft by Los Angeles that same year. Over four full seasons in the WHL with Brandon and Moose Jaw, Clague recorded 167 points in 195 regular season games, while also appearing in 54 post-season contests. He was named WHL Defenceman of the Year with the Warriors in 2018.

Austin Strand – Red Deer Rebels / Seattle Thunderbirds
Defenceman Austin Strand was a mid-season acquisition by the Seattle Thunderbirds during the 2016-17 campaign, and upon arriving in King County helped Seattle capture its first WHL Championship in May of 2017. The product of Calgary, Alta. split his four seasons in the WHL between Red Deer and Seattle. He led all Thunderbirds defencemen with 64 points, and finished second among WHL blueliners with 25 goals during the 2017-18 season. Strand was signed to an entry-level contract by the Los Angeles Kings in November of 2017 and made his NHL debut with the Kings in February of 2021.

“It was a pretty crazy experience, just having all the guys come up to me, congratulate me, was pretty cool, pretty surreal."

Austin Strand reflects on the path he took to his @NHL debut ⤵️ https://t.co/EE993rtiRp