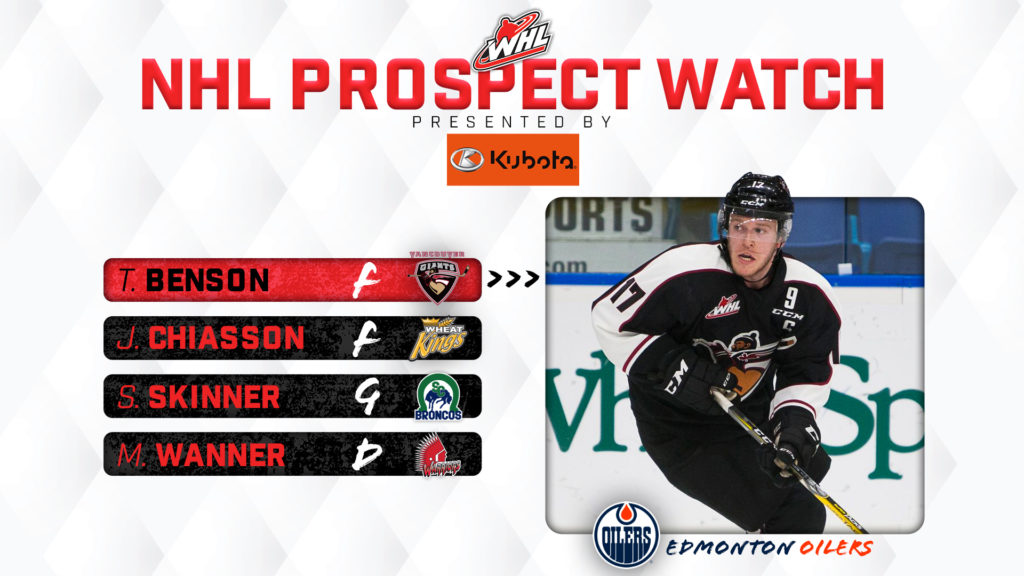 We continue our 32-part series with a look at the prospect pool of the Edmonton Oilers.

Tyler Benson – Vancouver Giants
Former Vancouver Giants captain Tyler Benson is coming off an impressive season in the AHL with the Bakersfield Condors. The product of Edmonton, Alta. registered 36 points in as many games to finish tied for the team lead in scoring during the 2020-21 season. Benson, who was selected in the second round of the 2016 NHL Draft by the Edmonton Oilers, has finished first or second in Condors scoring in each of the last three seasons including a 66-point campaign in 2018-19. For his efforts, he was named to the AHL All-Rookie Team in 2019. Benson made his NHL debut with Edmonton in February of 2020 and appeared in seven games with the Oilers during the 2019-20 season.

The #Oilers have signed forward Tyler Benson to a one-year, two-way contract extension.#LetsGoOilers

Jake Chiasson – Brandon Wheat Kings
A fourth-round selection by the Edmonton Oilers in the 2021 NHL Draft, forward Jake Chiasson is poised to play a prominent role with the Brandon Wheat Kings again this season. The product of Abbotsford, B.C. recorded 20 points (9G-11A) during the 2020-21 campaign as Brandon captured the East Division title. Over two seasons with the Wheat Kings, Chiasson has accrued 35 points, all while amassing only 12 minutes in penalties. He was originally selected 15th overall by Brandon in the 2018 WHL Draft.

Stuart Skinner – Lethbridge Hurricanes / Swift Current Broncos
Stuart Skinner backstopped the Swift Current Broncos to the 2018 WHL Championship, posting a 2.20 goals-against average and 0.932 save percentage and six shutouts as the Broncos claimed the Ed Chynoweth Cup for the first time in 25 years. Skinner put up 18 clean sheets over more than 250 regular season and playoff games with Lethbridge and Swift Current and was selected in the third round of the 2017 NHL Draft by the Edmonton Oilers. The product of Edmonton, Alta. won his NHL debut with the Oilers in January of this year. He boasted a 20-9-2 record over 31 games with AHL Bakersfield this past season.

Maximus Wanner – Moose Jaw Warriors
Defenceman Maximus Wanner was selected in the seventh round of the 2021 NHL Draft by the Edmonton Oilers after making 17 appearances this past season with the Moose Jaw Warriors. Wanner, a product of Estevan, Sask., registered four assists during the 2020-21 campaign. He originally signed with Moose Jaw in August of 2019.

Hey @EdmontonOilers fans, Maximus Wanner knows how to make the most of his time on the power play! pic.twitter.com/H9v71mq5Zs