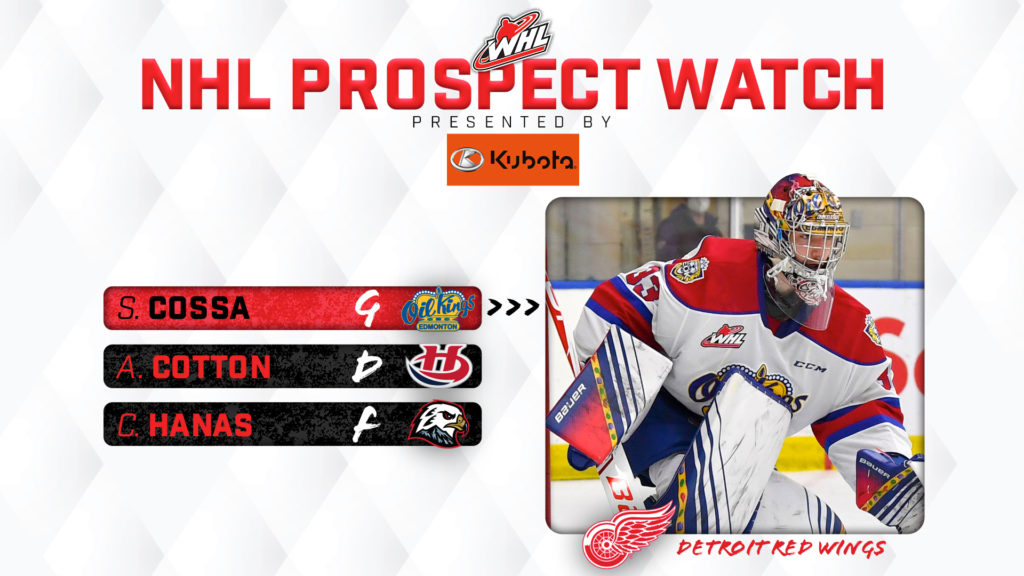 We continue our 32-part series with a look at the prospect pool of the Detroit Red Wings.

Sebastian Cossa – Edmonton Oil Kings
The 15th overall selection in the 2021 NHL Draft, goaltender Sebastian Cossa led the WHL in goals-against average and save percentage during the 2020-21 WHL season. The product of Fort McMurray, Alta. posted a 17-1-0-1 record as Edmonton captured its third consecutive Central Division title. Cossa has won 38 of his 52 career appearances in the WHL, posting eight shutouts during his two seasons with the Oil Kings. Cossa signed a three-year, entry-level contract with the Red Wings in August.

Alex Cotton – Lethbridge Hurricanes
A fifth-round selection by the Detroit Red Wings in the 2020 NHL Draft, defenceman Alex Cotton has been a consistent source of offence with the Lethbridge Hurricanes. The product of Langley, B.C. led all defencemen in scoring with 67 points (20G-47A) during the 2019-20 WHL season. He added 26 points (7G-19A) over 24 games during the 2020-21 campaign. Cotton was named to the WHL Eastern Conference Second All-Star Team in 2020.

An absolute 💥 BLAST 💥 from @DetroitRedWings prospect Alex Cotton & the @WHLHurricanes skate away with an OT win! pic.twitter.com/KDxYLVjq6k

Cross Hanas’ offensive creativity is through the roof.