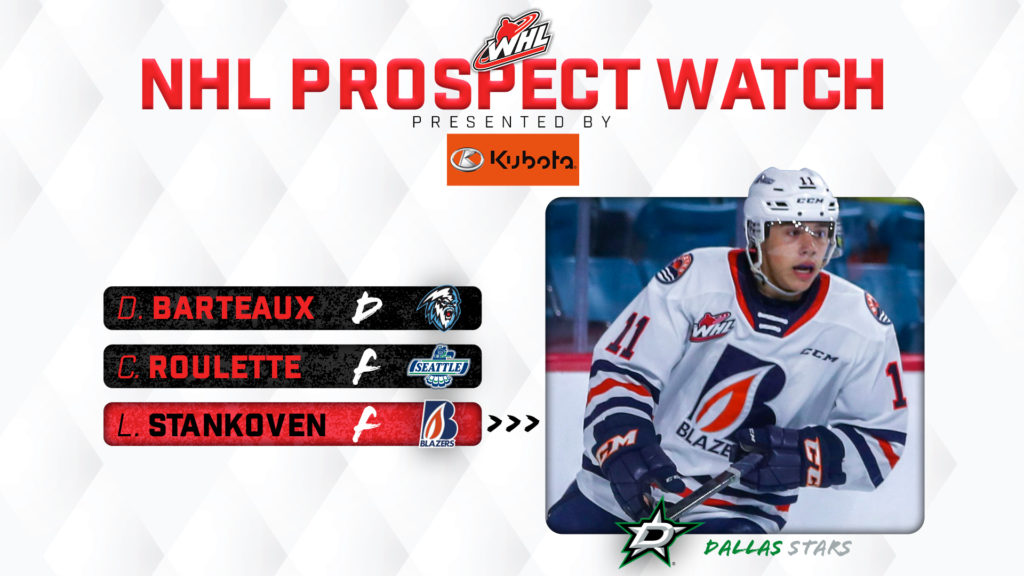 We continue our 32-part series with a look at the prospect pool of the Dallas Stars.

Dawson Barteaux – Regina Pats / Red Deer Rebels / Winnipeg ICE
Foxwarren, Manitoba’s Dawson Barteaux was selected in the sixth round of the 2018 NHL Draft by the Dallas Stars, and is preparing for his second season of professional hockey after appearing in 25 games for the Texas Stars of the AHL in 2020-21. Barteaux was originally selected in the first round of the 2015 WHL Draft by the Regina Pats, but was traded to Red Deer in a trade deadline blockbuster in 2017. Barteaux went on to captain the Rebels during the 2019-20 season before being dealt to the Winnipeg ICE at the 2020 WHL Trade Deadline. Overall, Barteaux compiled 112 points (20G-92A) over 236 WHL regular season games.

The Dallas Stars have signed defenseman Dawson Barteaux to a three-year, entry-level contract.

Conner Roulette – Seattle Thunderbirds
Conner Roulette was selected in the fourth round of the 2021 NHL Draft by the Dallas Stars after helping lead Canada to a gold medal at the 2021 IIHF U18 World Championship in Texas. The product of Winnipeg, Man. was originally selected in the second round of the 2018 WHL Draft by the Seattle Thunderbirds, and over 66 regular season appearances has recorded 51 points (25G-26A). Roulette was one of three Thunderbirds to average better than a point per game during the 2020-21 WHL season.

Get to know Conner Roulette 🌟https://t.co/IfXLssu3Og

Logan Stankoven – Kamloops Blazers
A second-round pick by the Dallas Stars in the 2021 NHL Draft, forward Logan Stankoven has impressed with his hometown Kamloops Blazers in his two WHL seasons. During the 2020-21 campaign, Stankoven registered seven goals in six outings before helping Canada capture the gold medal at the 2021 IIHF U18 World Championship. As a first-year player during the 2019-20 season, Stankoven finished tied for third among Blazers goal-scorers with 29 tallies. He was originally selected fifth overall by Kamloops in the 2018 WHL Draft.