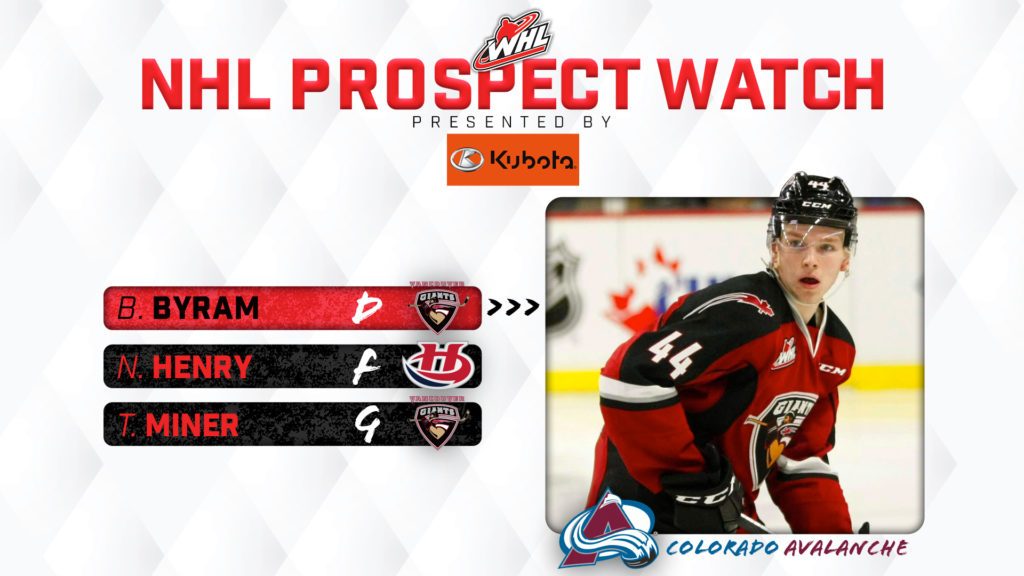 We continue our 32-part series with a look at the prospect pool of the Colorado Avalanche.

Bowen Byram – Vancouver Giants
Defenceman Bowen Byram is primed for a breakout season with the Colorado Avalanche after appearing in 19 NHL games during the 2020-21 campaign. The product of Cranbrook, B.C. is a former fourth overall selection by the Avalanche, and in addition to his NHL debut he captained Canada to a silver medal at the 2021 IIHF World Junior Championship in Edmonton. Byram was a key figure on the Vancouver Giants club that reached the WHL Championship series in 2019, his 26 points (8G-18A) led all scorers in the 2019 WHL Playoffs. He also holds the Vancouver Giants record for goals in a season by a blueliner after registering 26 during the 2018-19 campaign.

Bowen Byram kicked off his time in the league with a pretty solid rookie season, and we're excited to watch him at the Rookie Faceoff in a few weeks!#GoAvsGo https://t.co/Gj11LasSYd

Nick Henry – Regina Pats / Lethbridge Hurricanes
Nick Henry surpassed the 80-point mark in two of his three WHL seasons, including a 94-point campaign split between the Regina Pats and Lethbridge Hurricanes in 2018-19. A fourth-round selection of the Avalanche in the 2017 NHL Draft, Henry split the 2020-21 campaign between the Colorado Eagles of the AHL and the Utah Grizzlies of the ECHL. As a Pat, Henry reached the WHL Championship in 2017, and scored seven points (5G-2A) in five outings when Regina hosted the Memorial Cup a year later.

THAT GOAL! THAT CELLY!

Trent Miner – Vancouver Giants
Goaltender Trent Miner was selected in the seventh round of the 2019 NHL Draft by the Colorado Avalanche, signing his entry-level contract this past spring. The product of Brandon, Man. compiled a 48-28-3-2 record with eight shutouts over 84 regular season appearances with the Vancouver Giants and was named the B.C. Division Goaltender of the Year in 2021. Miner got a taste of the professional game during the 2020-21 season, appearing in six games with the Colorado Eagles of the AHL. He posted a 2-3-1 record with one shutout.