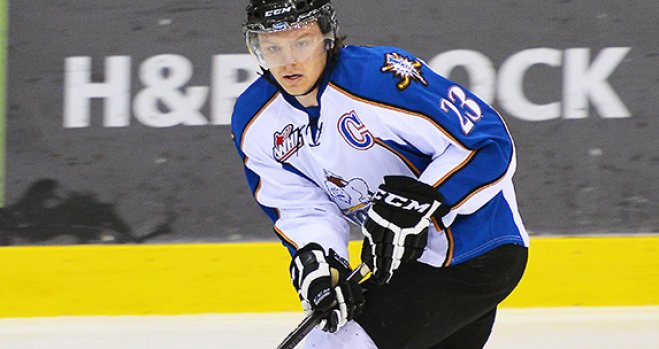 Calgary, AB – Leading up to the 2014 NHL Draft at the Wells Fargo Center in Philadelphia on June 27-28, WHL.ca and WHL Web TV, will highlight WHL players who are highly ranked by NHL Central Scouting leading up to draft day.  This week’s featured WHL player is Kootenay Ice captain and WHL Player of the Year Sam Reinhart.

Sam Reinhart just wrapped up his third season in the WHL with the Kootenay Ice.  The Vancouver, B.C., product finished tied for fourth in WHL scoring with 105 points, including 36 goals, in 60 games to help the Ice to their 15th consecutive season with a record of .500 or better.  Reinhart’s outstanding 2013-14 campaign saw him named the WHL Player of the Year and Sportsman of the Year, and earned him a spot on the WHL Eastern Conference First All-Star Team.

A poised, highly intelligent and competitive playmaker, Reinhart is one of the WHL’s elite offensive stars.  Standing 6’1” and 183 pounds, he has the size to battle physically, protect the puck and win puck battles.  Reinhart also possesses excellent puckhandling skill and strong skating ability, allowing him to make plays at high speeds.  Yet, it’s Reinhart’s vision, intelligence and hockey sense that really set him apart from others and make him a blue-chip NHL prospect.  Simply put, Reinhart sees the ice at a level much higher than most players his age.  He has a knack for knowing where to be on the ice, controlling the play when he has the puck, and making smart, effective plays to create scoring chances.  He’s also very diligent and responsible in the defensive zone.  Reinhart is a player who makes other players on his team better.

“He’s the most intelligent player in the WHL, as far as hockey sense is concerned,” said Kootenay Ice head coach Ryan McGill.  “His vision and his ability to deliver the puck to team mates at speed and in traffic would be his top attributes, for sure.

“He doesn’t have any deficiencies, which means when he plays with better players, he’s only going to get better,” he said.

The son of former NHL defenceman Paul Reinhart, Sam has already seen his two older brothers excel in the WHL and get drafted by NHL Clubs.  His oldest brother, Max, who also played for the Kootenay Ice, is a prospect in the Calgary Flames organization.  His other brother, Griffin, a defenceman for the Edmonton Oil Kings, was the fourth overall pick in the 2012 NHL Draft by the New York Islanders.

Having strong hockey bloodlines and growing up battling against his talented older brothers, it’s easy to see why Sam has developed such a well-rounded game.  Not only has he learned to think the game at an extremely high level, but he developed a deep competitive nature that motivates him to be a winner and a difference-maker. 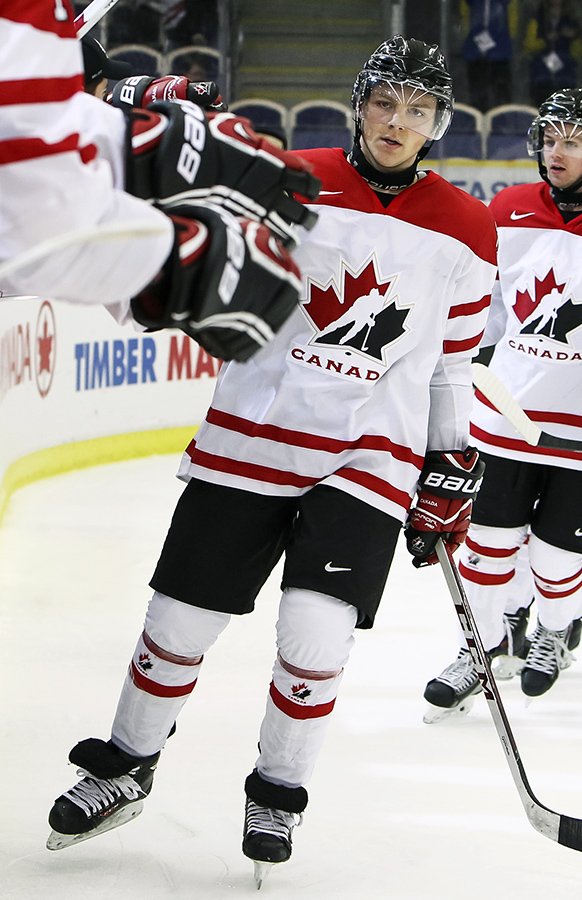 Ranked third among all North American skaters in NHL Central Scouting’s final rankings for the 2014 NHL Draft, Reinhart draws high marks from those who have scouted him this past season and since he broke into the WHL as a 16-year-old in 2011-12.  Dan Marr, director of NHL Central Scouting, says it’s easy to see why Reinhart would be attractive to any potential NHL employer.

“He has the high-end skill, he’s a great skater, but mainly he’s got a competitive edge to him that we really think he can be a game-changer,” said Marr at the 2014 BMO CHL/NHL Top Prospects Game in January in Calgary, AB.  “He can go out there and play like he’s a warrior, and that’s something that really impressed us.”

Drafted by Kootenay in the first round, 15th overall, in the 2010 WHL Bantam Draft, Reinhart has built up an impressive hockey resume.  As a 15-year-old, he helped lead Team BC to a Gold medal at the 2011 Canada Winter Games, finishing tied for fourth in tournament scoring.  He then finished tied for third in scoring while helping Team Pacific to a Bronze medal at the 2012 World Under-17 tournament.  Reinhart played for Canada’s Under-18 team on three occasions, captaining the team twice and winning Gold twice, and also played for Canada’s national junior team at the 2014 IIHF World Junior Championship.  Reinhart twice suited up for Team WHL in the SUBWAY Super Series’ in 2012 and 2013.

Did you know…Reinhart finished second in tournament scoring with seven goals and 20 points for the Vancouver NW Giants at the 2011 Telus Cup national Midget Championship tournament…He played in seven games for the Kootenay Ice in the 2011 WHL playoffs as a 15-year-old, winning a WHL Championship…Reinhart is an avid soccer fan.