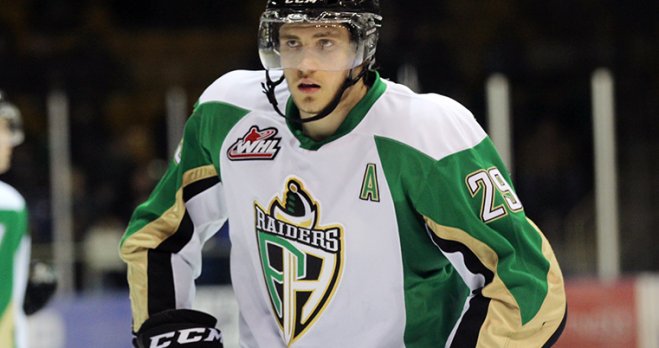 Calgary, AB – Leading up to the 2014 NHL Draft at the Wells Fargo Center in Philadelphia on June 27-28, WHL.ca and WHL Web TV, will highlight WHL players who are highly ranked by NHL Central Scouting leading up to draft day.  This week’s featured WHL player is Prince Albert Raiders’ star centre Leon Draisaitl.

Leon Draisaitl just completed his second season in the Western Hockey League with the Prince Albert Raiders.  The native of Cologne, Germany, led the Raiders and finished tied for fourth in WHL scoring with 105 points in 64 games, helping the Club make the playoffs for a second straight season.

A big-bodied, strong centreman with great skill and hockey sense, Draisaitl has developed into an elite offensive performer in the WHL over the past two seasons since coming over from Germany.  Draisaitl’s outstanding poise, vision and puck skills give him the ability to control the game, much in the mold of Joe Thornton or Anze Kopitar, and make him particularly effective on the power play.  Draisialt’s size allows him to protect the puck and drive to the net, while his strong passing ability enables him to distribute the puck effectively and create scoring chances for teammates.  Not only is Draisaitl a dominant offensive player, he’s developed into a very dependable performer in the defensive zone.

“He’s a big, powerful kid, he protects the puck so well and is very difficult to knock off the puck, and his awareness and ability to make plays is through the roof,” said Raiders’ general manager Bruno Campese.  “He’s got great vision, great playmaking skills and is just a really hard player to play against because of his ability to control the puck and control the play.”

While he has come a long way with his development over the last two season in Prince Albert, Draisaitl is always looking to improve in all areas of his game.  His character and his desire to keep improving make him even more attractive to potential NHL employers.

“He’s a very humble, character kid, he’s very mature for his age, and he comes from a hockey background, so I know he’s well-schooled in what the life of a professional hockey player is about,” said Campese.  “He’s a very in-depth guy.”

Selected by the Raiders with the second overall pick in the 2012 CHL Import Draft, Draisaitl has an impressive international resume.  He has twice suited up for Germany’s national junior team, captaining the team at the 2014 World Junior Championships, and twice represented Germany at the Under-18 level.  Draisaitl made his Senior Men’s team debut at the 2014 IIHF World Championships as the youngest member of the German squad.  Draisaitl also participated in the 2014 BMO CHL/NHL Top Prospects Game.

Did you know…Draisaitl’s father, Peter, played 18 seasons in the German Bundesliga, scoring 313 goals…Draisaitl scored a staggering 97 goals and 192 points in just 29 games for the Mannheim ERC Under-16 team in 2010-11, while adding 16 goals and 31 points in just five playoff games.