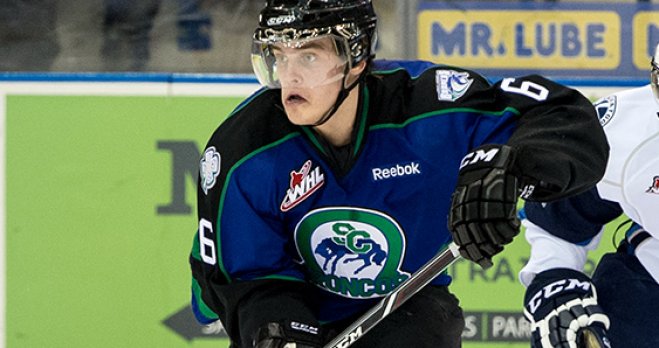 Calgary, AB – Leading up to the 2014 NHL Draft at the Wells Fargo Center in Philadelphia on June 27-28, WHL.ca and WHL Web TV, will highlight WHL players who are highly ranked by NHL Central Scouting leading up to draft day.  This week’s featured WHL player is Swift Current Broncos’ high-scoring defenceman Julius Honka.

Julius Honka just completed his first season in the Western Hockey League with the Swift Current Broncos.  The Finland native appeared in 62 games for the Broncos during the 2013-14 WHL regular season, scoring 16 goals and 40 assists for 56 points to lead the Broncos to a fifth-place finish in the Eastern Conference.  Honka’s 56 points led all rookie defencemen and placed him fourth among all first-year WHL players in scoring, earning him a spot on the WHL Eastern Conference Second All-Star team.

A swift-skating, offensive-minded defenceman, Honka assimilated quickly to North America and the WHL, and established himself as one of the top point-producing blue liners in the League.  Though he may not be the biggest or most physical rearguard, Honka’s outstanding hockey sense and athleticism make him incredibly effective in all areas of the ice.  His skating ability is elite and his agility and lateral movement enable him to rush the puck up ice, join the rush, and play a solid positional game in the defensive zone.  Honka is at his best when in the attacking zone, though.  He can move the puck very well, boasts a heavy shot, and is highly skilled with the puck, making him a dangerous threat on the power play.

“He’s very gifted, offensively, and he became one of the best defencemen in the WHL,” said Swift Current Broncos’ general manager and head coach Mark Lamb.  “He’s extremely competitive, he can really shoot the puck, he’s got great offensive instincts, and his defensive game – he’s played against all the top players all season – he’s turned himself into a good shutdown guy, too.

“He’s going to be able to run a power play at the next level, but he’s also turned himself into a well-rounded player in all areas of the game,” he said.

There is always a transition for a young player coming into the WHL.  Moving away from home, attending a new school and getting accustomed to a much higher level of hockey are all things players must adjust to.  For European players, the transition can be even tougher, with language and culture differences.  Yet, Honka made a smooth transition to life in Swift Current and life in the WHL, which paid dividends with his outstanding play on the ice for the Broncos.

“He adapted very well,” said Lamb.  “He had a lot of people to help him adapt, and he had (Broncos’ goaltender) Eetu Laurikainen, who is from the same town in Finland, to help him.  The team is very close because they all hang around together, and he fit right in with the guys.”

Selected by the Broncos in the first round, 38th overall, in the 2013 CHL Import Draft, Honka has represented Finland on several occasions at the Under-16, Under-17 and Under-18 levels.  Most recently, Honka played for Finland’s national junior team at the 2014 IIHF World Junior Championship, helping the team win a Gold medal for the first time since 1998. He was the youngest player on the roster.  Honka also participated in the 2014 BMO CHL/NHL Top Prospects Game.

Did you know…Honka models his game after Ottawa Senators’ Norris Trophy winning defenceman Erik Karlsson…Honka’s 16 goals was the most by a WHL rookie defenceman since Kevin Connauton scored 24 for the Vancouver Giants in 2009-10…Honka was named the WHL’s first Denny’s WHL Player of the Week for the 2013-14 season.