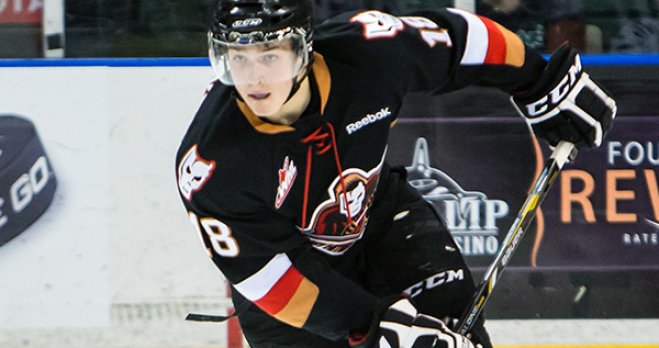 Calgary, AB – Leading up to the 2014 NHL Draft at the Wells Fargo Center in Philadelphia on June 27-28, WHL.ca and WHL Web TV, will highlight WHL players who are highly ranked by NHL Central Scouting leading up to draft day.  This week’s featured WHL player is Calgary Hitmen power forward Jake Virtanen.

Jake Virtanen wrapped up his second season in the Western Hockey League with the Calgary Hitmen.  The 17-year-old product of Abbotsford, B.C., appeared in 71 games, netting 45 goals and 26 assists for 71 points with a +23 rating to help Calgary to a 48-17-3-4 record and a third-place finish in the Eastern Conference.  Virtanen’s 45 goals led all NHL Draft-eligible players and placed him 6th among all WHL players.

A big, physical forward with skill, Virtanen’s best asset is his NHL-caliber shot.  With a quick, deceptive release and plenty of power and accuracy behind it, Virtanen can beat goaltenders from distance or from in tight with his quick hands and puckhandling.  He uses his big 6’1”, 210-lb frame to protect the puck and drive to the net, and to battle along the boards and in the corners.  A very good skater with decent speed, Virtanen can also beat defenders wide and power himself to good scoring areas.  In addition, Virtanen’s fitness and athletic ability sits right at the top among 2014 NHL Draft-eligible skaters, having been the top performer in fitness testing at the 2014 BMO CHL/NHL Top Prospects Game.

“His power and his speed, and being willing to go through someone to score a goal,” said Hitmen general manager Mike Moore when describing Virtanen’s best attributes.  “He’s a dynamic guy that, when he gets the puck, can make a lot of things happen, from our end all the way down to the opponent’s goal line.”

Having always possessed the tools to be a dominant player, Virtanen still has a lot of room to grow.  Moore says he sees Virtanen having a high ceiling, especially with regard to his hockey sense and intelligence on the ice.

“I see (his hockey sense) growing,” said Moore.  “He’s always been a guy who has been able to play with the puck and go end-to-end with it, but as he matures and develops, he’s learning to use his teammates and distribute the puck more effectively…he’s come a long way in the last two years.”

“He’s not a selfish player, but he’s never had to really share the puck because he’s had that ability to do so much, individually, in the past,” he said.

The first overall pick in the 2011 WHL Bantam Draft, Virtanen’s hockey resume already includes several international events.  He played for Team Pacific in the 2013 World U-17 Hockey Challenge, leading the team with five goals.  Virtanen played for Canada’s Under-18 team at the 2013 Memorial for Ivan Hlinka tournament, winning a Gold medal, and led Canada’s U-18 team in scoring while claiming Bronze at the 2014 Under-18 World Championships.  In 2011, Virtanen played for Team BC at the Western Canada U-16 Challenge Cup, leading the team with five goals.

Did you know…Virtanen is one of only two players selected first overall by the Calgary Hitmen in a WHL Bantam Draft, with the other being Chris Nielsen…Virtanen models his game after Rick Nash of the New York Rangers.