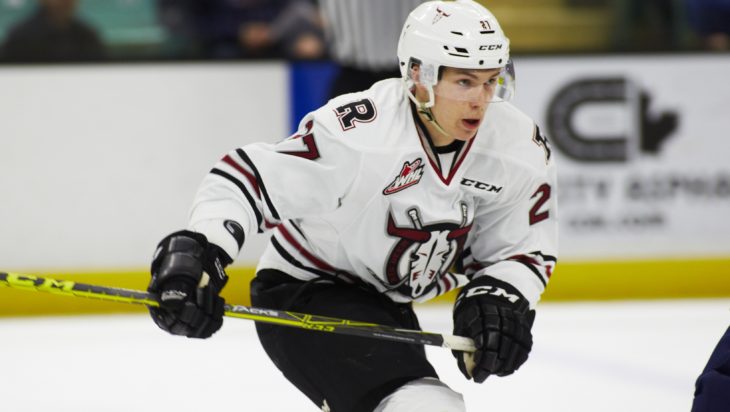 Taden Rattie is headed for the West Coast.

The Vancouver Giants and Red Deer Rebels struck for a midnight deal Friday, with the Giants acquiring the 18-year-old winger in exchange for a sixth round pick at the 2017 WHL Bantam Draft.

“We’re looking forward to adding Taden to our roster,” said Glen Hanlon, general manager of the Giants, in a team release. “He’s a big forward who will bring some size and grit to our lineup right away.”

Rattie, a native of Airdrie, Alta., was in the Rebels lineup during a 3-2 overtime loss to the Edmonton Oil Kings on Friday night. He found his way to the game sheet with two penalty minutes.

Meanwhile in Langley, the Giants dropped a 7-3 decision to the Everett Silvertips in the first game at the Langley Events Centre.

Prior to joining the Rebels, Rattie skated in 87 games in the Alberta Junior Hockey League, collecting 16 goals and 31 points, split between the Whitecourt Wolverines and Calgary Mustangs.

According to the Giants release, Rattie is expected to be available to dress Saturday night as Vancouver visits the Silvertips at Xfinity Arena.