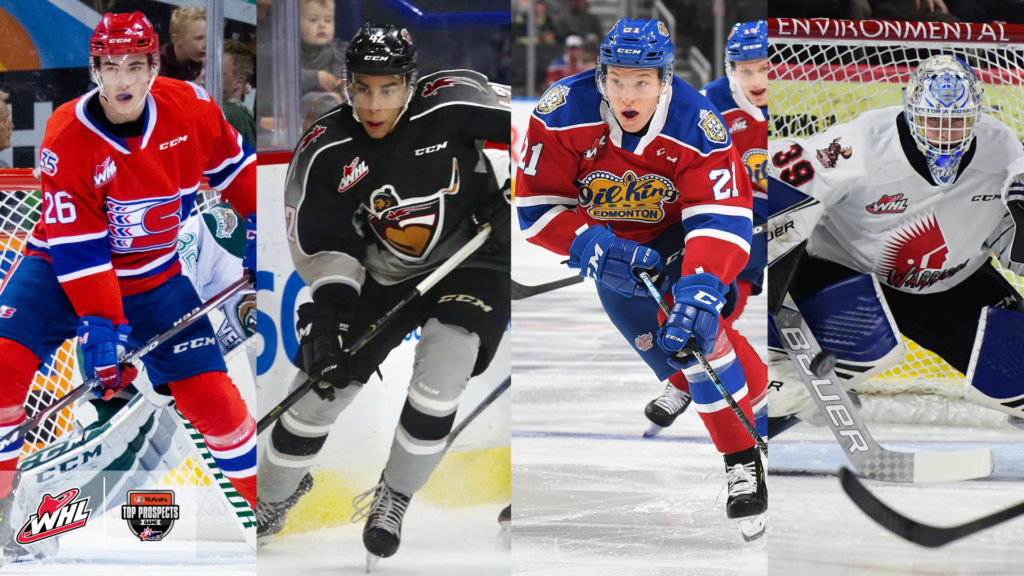 With the annual Kubota CHL/NHL Top Prospects Game set for Thursday, January 16, in Hamilton, Ont. lets take a look at which Western Hockey League stars will represent the Team Red.

Brock Gould – The new Moose Jaw Warriors goaltender will look to turn heads at the game in net for the Red Team. The 6-foot-4, 200-pound product of Colorado Springs, Colo. has spent the last two seasons in the WHL posting a record 13-21-2-1 with one shutout in 49 WHL regular season games. The 18-year-old still has plenty of room for growth as he looks to be a key piece for Moose Jaw moving forward. Gould is listed as the fourth-ranked North American goaltender in the NHL Central Scouting Midterm Rankings.

Set to appear at the 2020 #CHLKTP later this month, new @MJWARRIORS goaltender @goaliguy32 is having an impressive season!

Kasper Puutio – Recently acquired from the Swift Current Broncos, Kasper Puutio will be a key piece for the Everett Silvertips as the team looks to repeat as U.S. Division winners. The 17-year-old has 16 points (1G-15A) in 35 games in his WHL first season. Praised for his ability as a two-way defenceman, look for the 5-foot-11, 181-pound product of Vaasa,Fin. to make an impression at the game and with the offensive powerhouse Silvertips. Puutio is ranked 84th among North American skaters in the most recent NHL Central Scouting Midterm Rankings.

Jack Finley – Tied for third in team scoring with the Spokane Chiefs, Jack Finley is enjoying a career year with the Chiefs. Coming in at 46th in the most recent North American NHL Central Scouting Rankings, the 6-foot-5, 205-pound centre has stepped into a key role with the Chiefs in his second season in the league. This season Finley has 36 points (10G-26A) in 40 games. Overall, Finley has played in 110 WHL regular season games notching 56 points (19G-37A) including three power-play goals and two game-winning goals.

Justin Sourdif – After notching 46 points (23G-23A) with the Vancouver Giants in his first season in the WHL, Justin Sourdif has continued to make strides as a two-way threat. The 5-foot-11, 163-pound centre was selected third overall by the Giants at the 2017 WHL Bantam Draft. The forward has already played in 104 WHL regular season games, registering 75 points (36G-39A) including five game-winning goals and four power-play goals. Sourdif is listed 23rd in North American NHL Central Scouting and will look to continue to boost his draft stock as the Giants push for a playoff position in the B.C. Division.

Ozzy Wiestblatt – Already with 46 points (17G-29A) this season for the Prince Albert Raiders surpassing his total last season, Ozzy Wiestblatt has taken on a larger role for the 2019 WHL Championship winners. Wiestblatt, the 17-year-old, is ranked 14th in NHL Central Scouting Rankings. The 5-foot-10, 182-pound right winger has registered 86 points (33G-53A) in 108 WHL regular season games including 11 power-play markers and five game-winning goals. Last season in the Raiders WHL Championship win, Wiestblatt had 10 points (5G-5A) in 23 playoff games. On the most recent NHL Central Scouting Rankings, Wiestblatt climbed to 14th-ranked among skaters. Wiestblatt will also serve as one of Team Red’s assistant captains along side team captain Quinton Byfield of the Sudbury Wolves and assistant captain Dawson Mercer of the Chicoutimi Sagueneens.

SCORES! @ozzywiesblatt finishes off a great passing play with the man advantage!