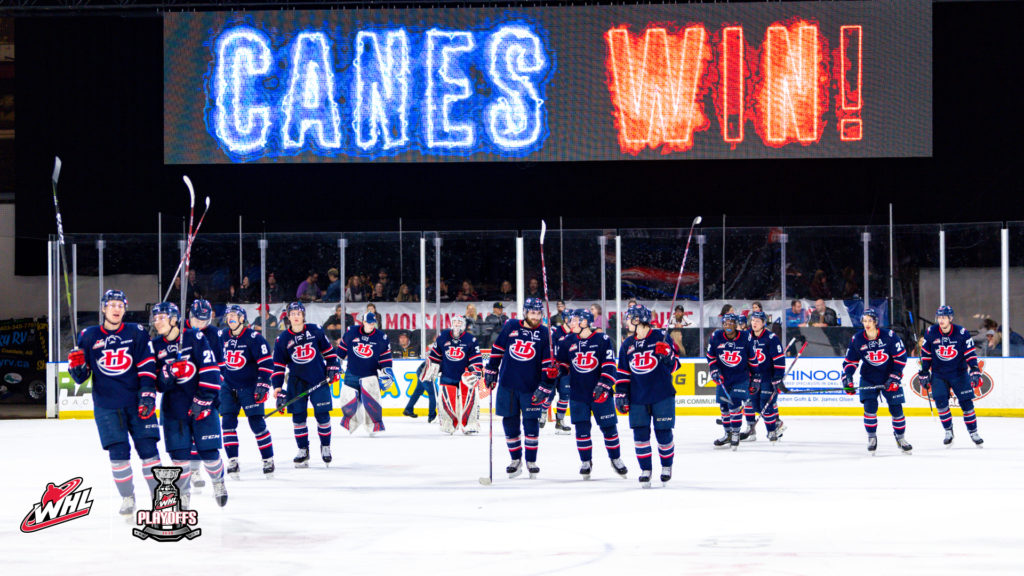 For a fifth-straight season, the Lethbridge Hurricanes have qualified for the Western Hockey League Playoffs.

Their berth for the 2020 edition of the WHL Playoffs was confirmed Monday afternoon thanks to a 2-1 regulation loss by the Regina Pats against the Brandon Wheat Kings. With the loss, the Pats can only achieve a maximum of 73 points by the end of the 2019-20 WHL Regular Season, with the Hurricanes already at 75 points.

Despite some key offseason losses, the Hurricanes have come back stronger than ever, ranking inside the top five of the WHL’s overall standings.

The 18-year-old Cotton has posted 59 points (18G-41A) in 55 games to lead all WHL defencemen in goals, assists, and points entering Monday’s action. Addison has also enjoyed a productive season as well, posting 46 points (10G-36A) in 42 games.

In addition to their offensive success with the Hurricanes, Cozens and Addison helper drive Canada to a gold-medal performance at the 2020 IIHF World Junior Championship.

Between the pipes, hometown product Carl Tetachuk has continued to provide strong play between the pipes, posting a 19-8-1-5 record, 2.58 goals-against average, 0.90 save percentage, and three shutouts. The emergence of 2020 NHL Draft prospect Bryan Thomson has created a perfect scenario to give the Hurricanes a strong shot at winning, regardless of who is between the pipes. Through 26 games this season, Thomson has posted a 15-5-1-0 record, 2.93 GAA, 0.897 SV%, and one shutout.

The Hurricanes are currently in action against the Edmonton Oil Kings Monday in the provincial capital.

Their next game after will be at home against the Spokane Chiefs on Wednesday, February 19 (7 p.m. MT).

Joining the Hurricanes in the 2020 WHL Playoffs so far are the Portland Winterhawks, Edmonton Oil Kings, Everett Silvertips, and Kamloops Blazers.