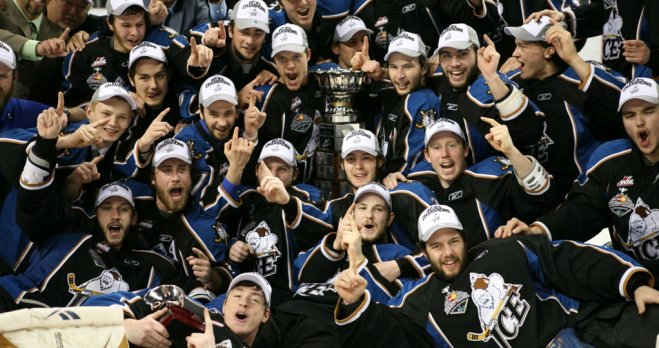 The Kootenay Ice won the Western Hockey League championship trophy that bears its founder’s name, with a convincing 4-1 victory over the Portland Winterhawks on Friday night.

The price was steep, but the gamble paid off Friday as the Ice beat the Portland Winterhawks 4-1 to take the Western Hockey League final in five games.

With the win, Kootenay qualified for the Memorial Cup, which gets underway May 20 in Mississauga, Ont.

Steele Boomer tied it in the first period, and Jesse Ismond scored into an empty net with 41.4 seconds left to unleash bedlam on the Kootenay bench.

“It’s unbelievable,” said Eakin. “I’ve worked four years for this in this league, but really it’s something you dream of when you first put on skates as a kid.”

Matt Fraser scored his league-leading 16th and 17th goals of the post-season for Kootenay, which trailed 1-0 early in the first period.

Steele Boomer scored in the first for the Ice, and Jesse Ismond added at empty-netter with 41 seconds left in the third.

Nathan Lieuwen, who was named series MVP, stopped 26 shots for his 16th win of the playoffs, while Mac Carruth made 36 saves for the Winterhawks.

Eakin was held off the scoresheet Friday, but led the Ice with nine points in the series and had 27 points in 19 playoff games.

The Ice finished fourth in the Eastern Conference during the regular season, but lost just three playoff games on the way to its first league title since 2002 — despite having a 32-year-old rookie head coach in Kris Knoblauch.

“I’m not sure we can top this,” said Knoblauch said. “We played well as a team.

“I don’t know if I’ll be able to coach a group of players like this ever again.”

Kootenay’s longest series was a six-game triumph over Moose Jaw in the first round. The Ice then swept away the top-seeded Saskatoon Blades and third-seeded Medicine Hat Tigers to win the East.

“It’s been a grind, but I’ve been trying to enjoy it,” Knoblauch added. “(Former Kootenay coach) Ryan McGill told me to soak it up because he didn’t enjoy it the first time he won the league title, so he gave me some reminders.”

After dropping Game 1 of the final to Portland, the Western Conference’s top team, the Ice won four straight to take home the Ed Chynoweth Cup.

Portland lost in its first trip to the league finals since 2001. The Winterhawks are now 2-7 all-time in WHL championship series.

“I thought we played well early in this game, but didn’t play well late,” said third-year coach Mike Johnston, who took the Winterhawks from 19 wins in 2008-09 to 50 this season.

Craig Cunningham, who played 409 games over five years in the WHL, including 79 in the post-season, appeared for the final time for Portland. First-round NHL draft picks Ryan Johansen and Nino Niederreiter also may not be back next season for the Winterhawks.

The Winterhawks had been battling slow starts throughout the post-season, but got going quickly Friday on Tyler Wotherspoon’s one-timer from the slot 2:26 into the first period.

Kootenay evened the score on an odd play. Boomer deflected the puck off the crossbar behind Carruth and it bounced down on the ice past the goal-line, but the officials waved the goal off and play continued for nearly three minutes until a whistle.

Kootenay then took a 2-1 lead on a power-play goal late in the second. Brayden McNabb faked a shot from the high slot and passed to an open Fraser, who beat a flailing Carruth with a one-timer.

Fraser added an insurance goal on another one-timer with 5:44 left in the third period before Ismond scored into an empty net.

See a complete wrap-up of the Ice’s WHL playoff campaign, and what to expect in the days ahead in Monday’s Daily Townsman.