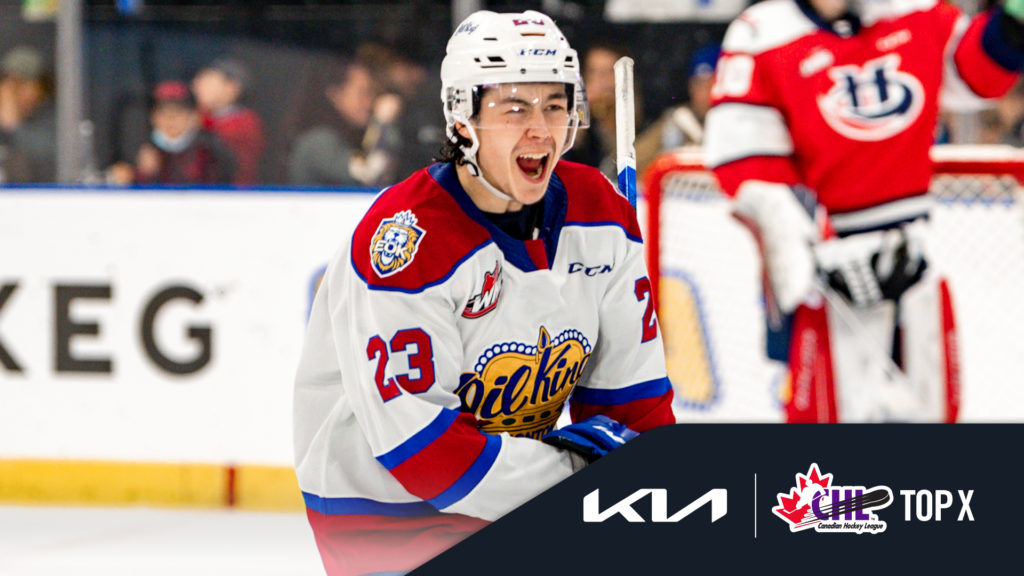 While the top three clubs – the Edmonton Oil Kings, Quebec Remparts, and Acadie-Bathurst Titan – remain unchanged in the Week 2 edition of the Kia CHL Top-10 Rankings, rocketing up to the No. 4 slot is the Winnipeg ICE who remain undefeated through four contests and stand atop the WHL with eight points. Freezing out the competition by a 25-goal margin through their four appearances, the ICE have seen dominant early season performances from a handful of players with seven forwards and one defenceman averaging at least a point-and-a-half per game. That group is headlined by a trio of 2002-born skaters in Mikey Milne, Owen Pederson, and Benjamin Zloty, all of whom have collected eight points apiece on the season and rank tied for first in league-wide scoring. On their heels is a pair of dynamic centres in Conor Geekie and Matthew Savoie, both with seven points through the early goings of a year that will culminate with both hearing their names called early in the 2022 NHL Draft class.

Beyond Winnipeg, also earning representation from the WHL includes the Portland Winterhawks who hold steady in the Kia CHL Top-10 Rankings for the third consecutive rendition – including the preseason – this time slotting in at No. 10, while the Kamloops Blazers and Lethbridge Hurricanes are set to begin their climb after earning honourable mention in Week 2.

Coming in at No. 5, the Blainville-Boisbriand Armada are one of three QMJHL clubs to earn a spot in the Kia CHL Top-10 Rankings after finding the win column through each of their five contests to begin the new campaign. After earning an invite to Anaheim Ducks’ training camp, undrafted defenceman Miguel Tourigny is showing what he learned from his short stint in the pro circles as he has put together an incredible early season performance in collecting a QMJHL-leading 10 points through five contests, coming on the heels of the 2020-21 season where he finished with north of point-per-game production after registering 15 goals and 21 assists through 32 games to lead all team rearguards in scoring. One of two representatives from Blainville-Boisbriand alongside centre Charles Boutin on the opening week rendition of the CHL Team of the Week, the Armada bring plenty of offensive flash with six players already having five or more points this season, while in the blue paint 2004-born goaltender Charles-Edward Gravel continues to stymie the opposition in having allowed just nine goals through his four showings, good for a 2.19 goals-against average and .929 save percentage that both rank amongst the league leaders. Elsewhere, also earning representation from the QMJHL is the Val-d’Or Foreurs who clock in at No. 7 after remaining undefeated in regulation through four games this season.

With the OHL back on the ice, leading the way is the London Knights who have won all three of their contests to begin the new season as the club stands tops in the OHL with six points. Headlined by Nashville Predators prospect Luke Evangelista, the 2002-born centre already has four goals to his name, putting him in a tie with North Bay winger and Edmonton Oilers prospect Matvey Petrov for the OHL lead. A native of Oakville, Ont., Evangelista is riding an early-season three-game point streak that includes back-to-back two-goal efforts coming against Owen Sound and Windsor. On the back end, the Knights have also seen impressive early returns from rookie rearguard Jackson Edward who has picked up three points in as many games, while 2002-born goaltender Brett Brochu also continues to dazzle between the pipes. Following up on a dominant first season in which he took command of the franchise record for wins by a rookie netminder, Brochu is back to form in 2021-22 in winning all three of his games while allowing just eight goals on a combined 100 shots. Beyond London, also earning recognition in the Kia CHL Top-10 Rankings is the returning Barrie Colts and Kingston Frontenacs, while the Windsor Spitfires slot in as part of the honourable mention category.