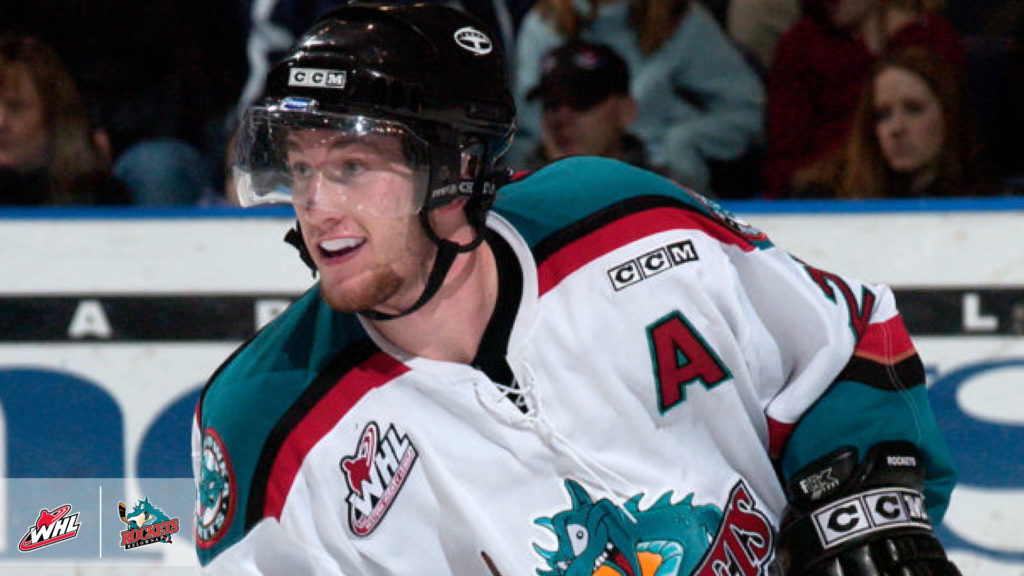 Former Rockets defenceman Brett Palin, a member of the 2004 Memorial Cup team, recently took the time to answer questions about his memories from his time as a Rocket, the 2004 season, what he went on to do and where he’s at now.

Palin played five seasons with the Rockets, suiting up in three Memorial Cup tournaments. The Nanaimo, B.C. product appeared in 324 regular-season games for Kelowna, picking up 61 points (6G, 55A).

He was the 14th captain of the organization during the 2004-05 season.

KR: How did you become a Rocket? Were you drafted, listed or acquired in a trade?

BP:  I was originally listed with the rockets while playing midget hockey in Nanaimo. At that time, I didn’t know much about the WHL or the Rockets. That summer I came to camp thinking it was more of an end of summer holiday rather than a try-out. To my surprise (and probably a lot of other peoples), I made the team and have called Kelowna home since.

KR: You cracked the Rockets roster as a 16-year-old during the 2000 season, what did you learn in that first year?

BP:  Being sixteen and playing for the Rockets was both fun and challenging, almost everything was a learning experience.  Moving away from home at sixteen forced me to grow up quicker than I probably would have if I stayed in Nanaimo. At the rink, I learned a lot about the effort and preparation it would take to be successful in the WHL. Luckily I had a great billet family and an awesome group of teammates to lean on and enjoy my first year with.

KR: The Rockets played in the 2003 Memorial Cup, how do you think that tournament helped the team prepare for the 2004 run?

BP: Our first trip to the Memorial Cup was very frustrating. I believe that our success in 2004 was directly tied to the previous year’s result. We were more mentally prepared for the tournament and determined to win the championship. The Rockets culture of ‘not getting complacent’ and ‘we’re not finished yet’ really took off that year and was a key driver for our success.

KR: What was your most memorable moment from the 2004 season other than winning the Memorial Cup?

BP: Probably when we lost to Everett in the semi-finals.

KR: What was your most memorable moment from the 2004 Memorial Cup tournament?

BP:  There were so many great memories from the tournament. The noise from the crowd thundering through the locker room before the final game was surreal.  Celebrating with teammates, family, and friends after the game is also a great memory.

KR: Following the 2005-2006 season you aged out of the Rockets, where did your hockey career take you after that?

BP: I played six years in the AHL. Five with the Calgary Flames affiliate and one for Nashville’s. After that, I spent the next seven years playing in various European leagues.

BP: I really enjoyed playing in Linz, Austria. We had a great group of guys on that team and also had fantastic fans.

KR: What are you up to now?

BP: I’m living in Kelowna with my wife Aliza and our two daughters. I’ve been pursuing a career in firefighting since retiring from hockey two years ago. Unfortunately, it hasn’t worked out yet. Currently, I work for Kone elevators doing installations while working towards a real estate license.

KR: What is one piece of advice that you have for the current Rockets team heading into the 2020 Memorial Cup presented by Kia?

BP: Do everything you can to prepare for it and leave it all on the ice. And most importantly, enjoy every moment. Winning in 2004 is by far the best moment in my hockey career and I’m excited to watch this year’s team do it again in 2020!

Ticket packages for the 2o2o Memorial Cup Presented by Kia are now on sale at selectyourtickets.com, at the Prospera Place box office or by phone at 250-762-5050.

"The noise from the crowd thundering through the locker room before the final game was surreal."

Former Rockets defenceman Brett Palin, a member of the 2004 Memorial Cup team, recently took the time to answer questions about his memories from his time as a Rocket.